With a gunshot injury on the back of her head, Rathour was declared “brought dead” by a private hospital, police said. 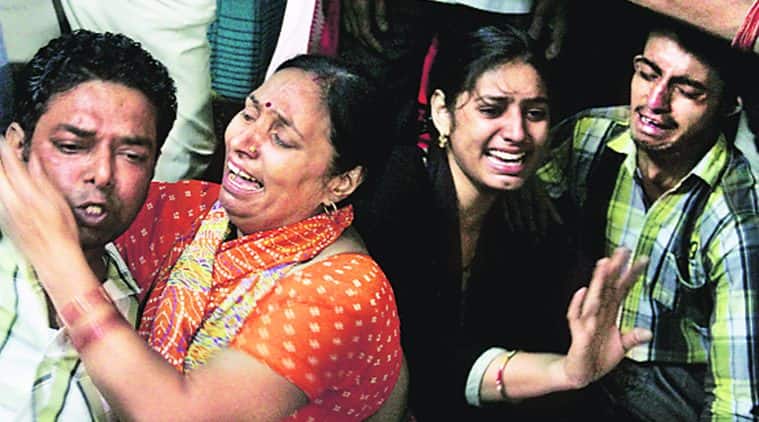 Family of Anjali Rathour in Noida on Wednesday. Gajendra Yadav

Around 6.30 am on Wednesday, Anjali Rathour, a trainee engineer with the marketing team of Lava Company, was at her third floor rented accommodation in Noida Sector 62, when she received a call and rushed to the ground floor. Moments later, she was found lying in a pool of blood near the parking area. With a gunshot injury on the back of her head, Rathour was declared “brought dead” by a private hospital, police said.

According to police, the incident took place around 6.34 am at Shatabdi Rail Vihar Residential Society in Noida Sector 62. “On the basis of her family’s complaint, an FIR under IPC Section 302 (murder) has been registered at Noida Sector 58 police station against Ashwini Yadav. The accused hails from Etawah and preliminary investigations show the victim and the accused have known each other for around two years. The post-mortem examination has been conducted and the body has been given to the family. The accused will be nabbed soon,” said Ajay Kumar Singh, SP City, Gautam Buddha Nagar.

Footage from the CCTVs at the parking area of the society’s B-block shows a person being chased by another carrying a backpack, his arms outstretched. The footage, which lasts about 20 seconds, is captured from next to the elevator and a vehicle. The footage also shows the person being chased ducking for cover, falling on the ground. After that, she is not visible since the attacker’s back is turned towards the camera. The cameras placed near the elevator showed the time of the recording as 6.34 am, but the alleged attacker’s face is unclear in the footage, police said.

Police added that one of Rathour’s five flatmates saw people gather around the body and identified her. “Her flatmate called Anjali’s mother and informed her about the incident. After graduating from Lovely Professional University in Jalandhar with B.Tech in Electronics and Communication, Anjali had joined Lava as a trainee engineer in June last year. She has two younger siblings — a brother and a sister,” said the victim’s maternal aunt.

The 23-year-old engineer, who is from Jagadhri in Haryana’s Yamuna Nagar area, had allegedly met the accused at the university around two years ago. “I know all her friends. I know Ashwini, too. The last call which was made to her phone was from him. In the society’s entry register, an entry by him has been made. He used his name and the same mobile number from which he had called her,” alleged her aunt, who lives in Delhi’s Sarita Vihar.

Around 15 days ago, a similar incident had taken place in south Delhi’s Malviya Nagar area when a 22-year-old fashion designing graduate was stabbed by her former driver. While the victim survived, the entire incident had been captured on a CCTV in the area.

Man held for ‘uploading obscene photos’ of ex-wife on Facebook