Delhi underground: Not a sport

Infighting in the Delhi BJP took a turn for the worse last week as the party anointed a new chief. 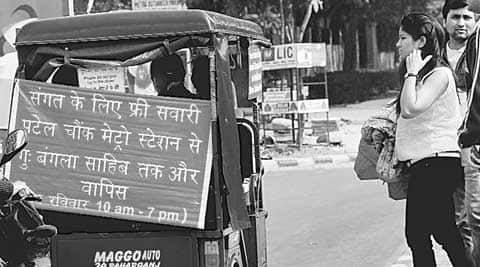 An electric rickshaw offered free rides from Patel Chowk Metro station to Gurdwara Bangla Sahib from 10 am to 7 pm on Sunday. Ravi Kanojia.

Infighting in the Delhi BJP took a turn for the worse last week as the party anointed a new chief. Outgoing president Vijay Goel went to Rajasthan a day before he was to hand over charge to newly appointed president Harsh Vardhan. To avoid embarrassment, the party cancelled the official programme. It is learnt, attempts by the party to contact Goel were unsuccessful.

The lower constabulary of Delhi Police seems more happy than anybody with the exit of the Aam Aadmi Party government. A policeman was heard telling a colleague, “I don’t think senior officers would now have a problem giving us leave. During Kejriwal’s tenure, it was so difficult to ask for or get leave. You never knew when he would sit on a dharna and you would be deployed on law and order duty. It feels so good now.”

Following a raid by the Delhi Police and an NGO, several women, trafficked to the capital, were rescued from a brothel. Once cases were registered and the matter put up before court, the judge noted that all the arrested persons were women. Reprimanding the police, the sessions judge observed: “By arresting only women, do you intend to say that a brothel… can be run by females only without the assistance of any male member? When the CBI deals with such matters, it arrests numerous male persons but Delhi Police always fails to find out male members… This itself causes a doubt over sincere efforts… during the investigation.”

At a function to lay the foundation stone for the redevelopment plan of Safdarjung Hospital on February 21, Health Minister Ghulam Nabi Azad shared a light moment with Delhi Chief Secretary S K Srivastava who, before being hand-picked by former CM Arvind Kejriwal for the post in his government, was posted as a special secretary with the Union Health Ministry. “I want to tell Srivastava that I have kept his post open… Now that the Delhi government has fallen, you should come back and resume your old duties, you will have more work there,” Azad said in his speech.

Irked by the increasing number of crimes against women in the capital, the Delhi High Court, last week, told the police to map areas, where such crimes occur. “People who commit these crimes don’t come from outer space. We have to know where these incidents are happening, so that we can find out what is wrong with these people,” the court said.

During a hearing in the Delhi High Court on his plea to be declared an independent Member of Legislative Assembly, the lawyer for expelled Aam Aadmi Party member Vinod Kumar Binny all but said that the MLA was contemplating supporting a different party. “May be, a ministership could have been offered to me,” the lawyer argued, emphasising that the threat of disqualification if Vinod Kumar Binny voted against the party line was restricting his “privilege” in the Delhi Assembly.

All preparations were done. Banners were put up, speeches prepared, even a crowd of students, lured by the appeal of snacks and tea, was assembled by the NSUI to welcome Arvinder Singh Lovely, the DPCC chief, at Delhi University. But the function had to be cancelled midway as Lovely’s plans changed. “Sir won’t be able to make it…,” an NSUI leader said.

During the hearing on a plea filed by a TV news channel against the TRAI restriction on showing more than 12 minutes of ads per hour, a Delhi High Court judge made it clear that personally, he did not support “too many ads” by saying how he hated sitting through long ad breaks while watching the news. “Take a poll from all the people sitting in court, nobody wants more ads,” the judge said.

With the Congress stepping up its activities in Delhi, the party’s strategists explained that the strategy for the coming elections was a “tried and tested” formula. Except that this “trial” was not done by the Congress, but by its rival – the Aam Aadmi Party (AAP). A senior Congress leader said, “Street protests, door-to-door campaigning and localised agendas, we are going to use every formula.”