Mehra had also called for a report from Tihar jail authorities to state whether the AAP leader was being provided with his special diet comprising of fruits, vegetables, and nuts. The report on Jain’s diet restriction will be submitted to the court Thursday. 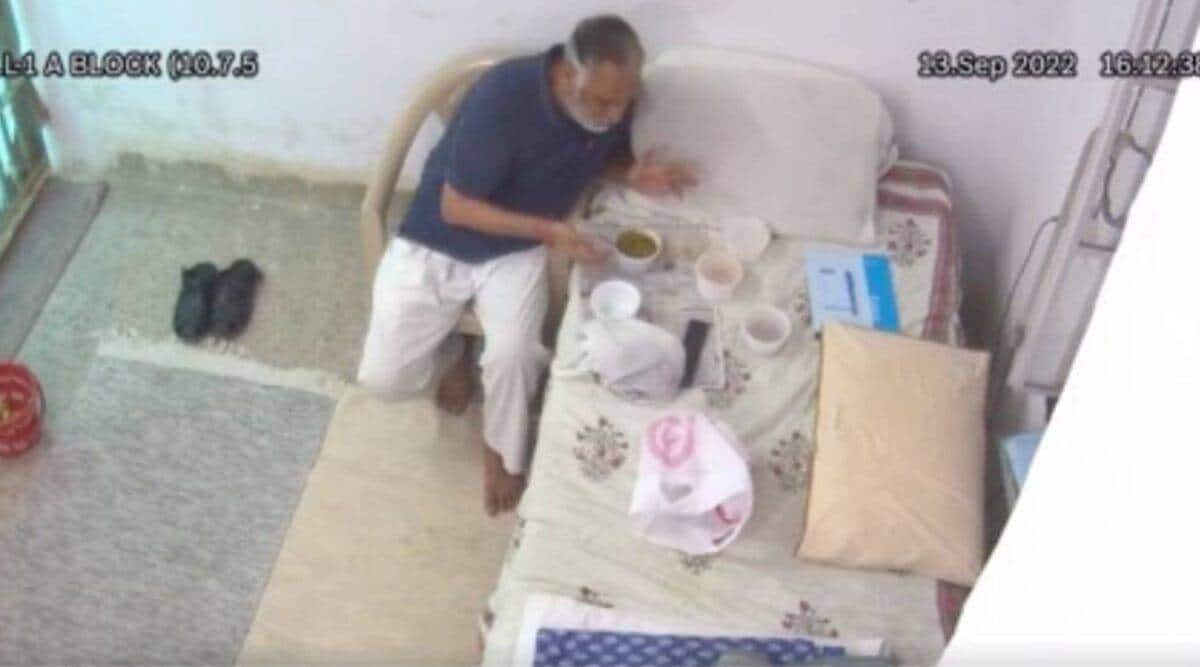 AAP minister Satyendar Jain is seen eating in his cell in Tihar Jail in this CCTV grab, purportedly from September 13. (Source: Twitter/@ANI)

AAP leader Satyendar Jain’s lawyers have told a Delhi court that the latest video leak showing him eating inside his cell at Tihar jail was based on doctored clips. Representing Jain, senior advocate Rahul Mehra made a series of prayers before Special Judge Vikas Dhull asking the judge to protect his client from any media leaks. The court will pass an order on this shortly.

Mehra had also called for a report from Tihar jail authorities to state whether the AAP leader was being provided with his special diet comprising of fruits, vegetables, and nuts. The report on Jain’s diet restriction will be submitted to the court Thursday.

Mehra told the court, “This is a court of law and it should not be made a mockery of. I am not leaking anything every day, there is a leakage. I am helpless. I am here till adjudication. Give every minute CCTV to this court. Why go all over the country [with the video] [in a] doctored manner displaying it.”

“Today in the morning, one video has been released. At least ask the top manager of the authorities in jail. Who has leaked this in the morning? Every day selective leaks in a doctored manner are being done which will give a certain impression to the people… Is this a media trial? Is my right being thrown out?” Mehra added.

Jain’s lawyers have told the court that the video was from September and contained videos from multiple dates. “Particular day, a particular time, and showing as if some major things are going on…Today one more release, another release. Will your honour permit something like this? Will your conscious not prick?” Mehra told the court.

Advocate Abhijit Shankar, who appeared for the Tihar jail authorities, told the court that the video was from September when the ED raids were underway and the videos were in possession of the agency. He said, “The video is from September 30. We know that in 30 days the footage is deleted. We cannot get personal and leak CCTV footage and put something on media. The ED raids were going on and they had the video. They (Jain’s lawyers) are intelligent enough to know.”

The court also heard Jain’s application which alleged that he lost 28 kg because his special diet was withdrawn by the jail authorities. Advocate Vivek Jain, who appeared for the AAP leader, told the court that this was an alarming development.

Judge Dhull said, “If you fast will you not lose weight ?”

Shankar had asked the court for at least three days’ time to submit his report since the jail superintendent was suspended and time was needed to prepare a detailed medical report. He also told the court that jail authorities did not restrict his special diet and that he was “not the first Jain person to hold a fast in jail.” “Detailed reports have been asked. Three days is nothing if you can survive for two months,” Shankar said.

Counting his argument, Vivek Jain said, “We have come to this day that you can’t give food for three days. Somebody has the audacity to make these arguments. Everybody needs 60 gm of protein every day”.

Why is your face turning into Saddam? Himanta Sarma asks Rahul Gandhi