Spain locked down its 46 million citizens and France ordered the closing of the Eiffel Tower, the Louvre, cafes and restaurants — as governments took increasingly desperate measures to put more space between people and contain the coronavirus. 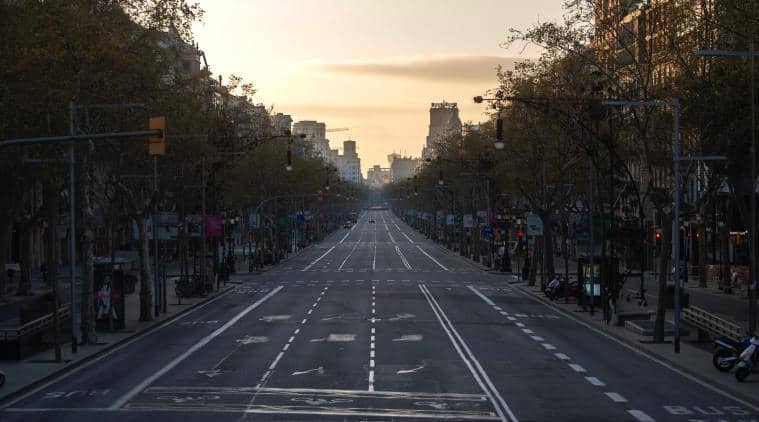 New travel restrictions and border closures reverberated Sunday across Europe and beyond to try to keep people apart and slow the spread of the coronavirus. The spread of COVID-19 in China has slowed dramatically, according to the National Health Commission. After reporting thousands of new cases per day only a month ago, the commission said Saturday that there were 13 new deaths and just 11 new cases, including people who recently arrived in China from other affected countries like Italy.

With new infections dwindling in Asia, Europe has become the main front line of the fight against COVID-19. The virus has infected 156,000 people and killed over 5,800, but nearly 74,000 people have already recovered from it, AP reported.

The number of people infected with the coronavirus in Spain increased by a third to 7,753  from 5,753 and more than 100 new deaths were recorded over the last 24 hours, health officials said Sunday. The country’s death toll from the outbreak climbed to 288 on Sunday from 183, according to Reuters. The jump comes a day after Spain’s government declared a state of emergency and took extraordinary measures to limit movement to commuting to work and necessary errands. It has also closed restaurants, bars, most retail shops and reduced public transport.

In an address Saturday, Spanish Prime Minister Pedro Sánchez detailed the list of exceptional measures put in place as part of a two-week state of emergency to fight the sharp rise in infections. The government imposed special measures including the confinement of people to their homes unless shopping for food and medicine, going to and from work, and to meet other basic needs. This includes the temporary centralisation of Spain’s health care system, which is run by regional authorities. Restaurants and hotels are closed and public transport reduced.

In Barcelona, people who ventured out on quiet streets to buy bread at one bakery formed long lines with a meter (about three feet) in between each person as recommended by authorities to reduce the risk of contagion. Police patrolled parks and told people who weren’t taking their dog on a quick walk to go home.

France, which has 4,500 infections and 91 deaths, went ahead Sunday with nationwide elections to choose mayors and other local leaders despite a crackdown on gatherings. The government ordered unprecedented sanitary measures at polling stations, where organisers had to keep a 1-meter (three-foot) gap between people and provide soap or hydro-alcoholic gel and disinfectant wipes for voting machines. Voters were told to bring their own pens.

Paris followed other cities in shuttering major tourist attractions, and France announced the closing of all restaurants, cafes, theaters and nonessential shops starting Sunday. It has banned all gatherings of more than 100 people, ordered all schools closed and asked companies to allow workers to stay home.

President Emmanuel Macron said on Sunday that the government had to impose stricter measures to tackle the coronavirus, but that the country would get through the crisis if it acted responsibly.

“I am the guarantor of the health of our citizens and also the democratic life of our country,” Macron said, defending his decision to hold local elections. “We will overcome this crisis by being responsible together and for each other,” he said, after casting his vote in northern France.

France has also asked aviation companies to help bring back thousands of French citizens stuck in Morocco after it halted flights with 30 countries over the coronavirus, French Transport Minister Jean-Baptiste Djebbari told AP.

Scores of foreign tourists are waiting at Marrakech airport or seeking replacement air tickets. Other French citizens are stuck elsewhere in the North African kingdom.

Following Italy, Spain and France announced sweeping emergency restrictions to combat the spread of the coronavirus.

Spain locked down its 46 million citizens and France ordered the closing of the Eiffel Tower, the Louvre, the cafes and restaurants — as governments took increasingly desperate measures to put more space between people and contain the coronavirus.

In Spain, people are banned from leaving home except for buying essential supplies and medicines, or for work. The country has recorded 191 deaths, Europe’s second worst-hit country after Italy. In France, where 91 people have died, cafes, restaurants, cinemas and most shops are now shut.

France will progressively reduce long-distance train, bus and plane travel on its territory over the coming days in a bid to limit the spread of the coronavirus.

(With inputs from Agencies)