Coronavirus (COVID-19): On Tuesday, hours after the Prime Minister announced that the national lockdown would be extended, ABP Majha journalist Rahul Kulkarni had cited an internal Railways document to report that special trains would transport stranded migrant workers back home. 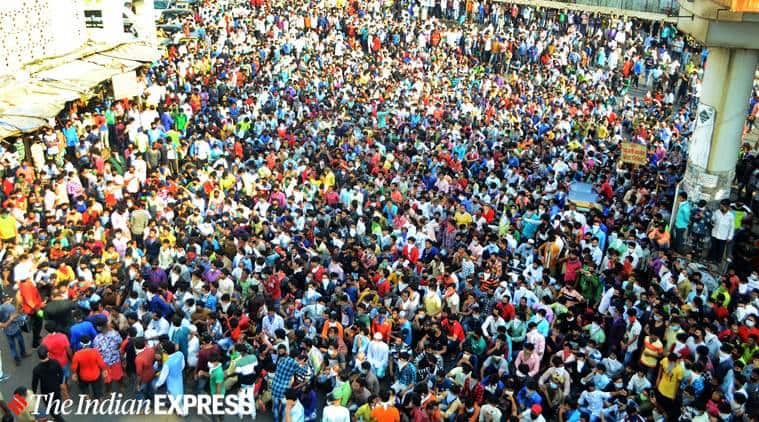 Thousands gathered near Bandra station in Mumbai on Tuesday afternoon after rumours that trains were about to run. (Express photo: Zoya Lobo)

Coronavirus (COVID-19): A Journalist with TV channel ABP Majha was among 11 people arrested by Mumbai Police Wednesday for having allegedly “played a part in the rumour mongering” that led to nearly 2,000 migrant workers gathering in Bandra the previous day and demanding to be sent back to their home towns.

On Tuesday, hours after the Prime Minister announced that the national lockdown would be extended, ABP Majha journalist Rahul Kulkarni had cited an internal Railways document to report that special trains would transport stranded migrant workers back home.

Police said that the video report was “incorrect” while arresting Kulkarni under various sections of the IPC and the Epidemic Act 1897. Slamming the move, ABP Majha called for “due to verification of all facts and circumstances” before arresting a journalist.

In a statement, the channel said the news story “was broadcast in public interest and on the basis of valid documents and information”. It said that it had also broadcast the Railway Ministry’s announcement that there would be no trains until the midnight of May 3.

“There is no conceivable way in which the crowds that gathered at Bandra West station from around 3.45 pm can be linked to our story. To insinuate that our running of the story and updates thereafter amount to a criminal act is outrageous. We are shocked and dismayed that our reporter Mr. Rahul Kulkarni has been arrested in connection with the story,” the channel said.

READ | In Mumbai, migrants lose hope, money: For how long, they ask Some workers claimed they had received calls about a meeting near the station on transport arrangements to take them home over the next few days. (Express photo by Zoya Lobo)

Several migrants that The Indian Express spoke to in the aftermath of the gathering did not mention seeing any videos or TV news reports. They said that they had “received several calls from others in the locality who told us that there would be a meeting held outside our colony where a decision would be taken on sending us to our villages”.

On Tuesday, Kulkarni had said in a Facebook post: “A responsible officer had in the morning sent me a letter detailing the efforts being undertaken by the Railways to ensure that migrants who are stuck can be sent back home. We made a report on the proposed plans of the Railways. At 9 am, we aired a report about the proposal and nowhere did it say as to when the trains will start.”

Kulkarni had also tweeted a document dated April 13 which, he said, was an “internal Railways note” on running Jansadharan Specials for stranded people.

When contacted, Chief Public Relations Officer for South Central Railway (SCR) Rajesh Chilaka described the letter as part of a “preparatory exercise” and claimed that its contents had been “taken out of context”.

“The idea was to gauge how many labourers are stranded within the zone and how many more trains would be needed, as the regular passengers services would not be sufficient once the services resume operations,” said Chilaka.

Police, meanwhile, said that a team from Bandra went to Osmanabad Wednesday morning and brought Kulkarni to Mumbai where he was formally placed under arrest. Among the others arrested was Vinay Dubey, a Navi Mumbai resident and local leader who has unsuccessfully contested the general elections in the past.

Dubey was arrested for allegedly posting a video asking migrants to take to the streets, and on suspicion that he was organising a protest on April 18 at Lokmanya Tilak Terminus, the starting point for several outstation trains. He was produced before a local court and was remanded in police custody till April 21.

Speaking to The Indian Express, JCP (law & order) Vinoy Kumar Chaubey said: “Kulkarni and Dubey played a part in the rumour mongering that there were trains taking people to their native place. Hence, there were separate FIRs registered against both of them and they were placed under arrest.”

Nine others were arrested on an FIR registered against 800-1,000 people who had assembled on Tuesday.

Covid-19: In UP, 3 more die, all with underlying ailments