The ICMR had picked 1,020 random samples of people with severe acute respiratory illness pneumonia and influenza-like symptoms for testing for Covid-19. 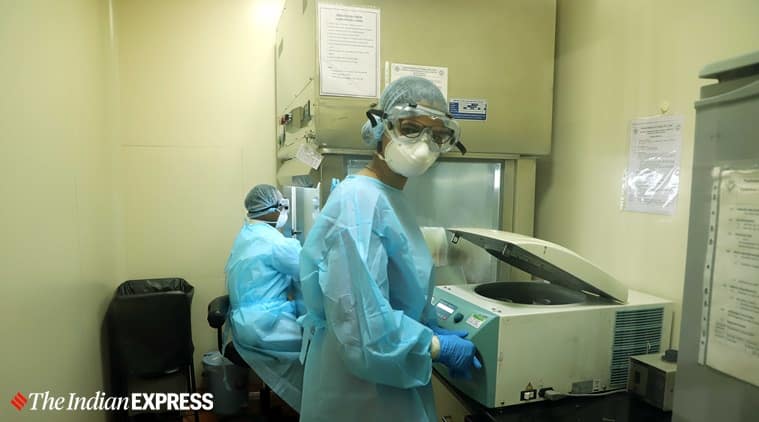 The 1,020 samples tested in March were collected between the 1st and 15th, and sent to 51 labs. (Express photo: Pavan Khengre)

The first batch of results for tests done by the Indian Council of Medical Research (ICMR) in March to check for community transmission of coronavirus are negative.

The ICMR had picked 1,020 random samples of people with severe acute respiratory illness pneumonia and influenza-like symptoms for testing for Covid-19. The results of 500 samples are negative, a sign that community-level transmission of the coronavirus may not be taking place in India still. The results of the remaining 520 samples will be available by Wednesday.

Earlier, another batch of random tests, done uptil February 29, had come out negative.

The 1,020 samples tested in March were collected between the 1st and 15th, and sent to 51 labs. If a positive case turns up in these random samples, the ICMR said, it would indicate community transmission and they would enforce localised quarantine and testing measures in the areas from where samples were collected.

A day after WHO Director-General Dr Tedros Adhanom Ghebreyesus said his advice to all countries was “test, test, test”, the organisation’s country office praised India’s efforts in handling Covid-19, that include restricting testing to symptomatic cases that could be traced back to those with history of travel. WHO Country Representative Dr Henk Bekedam also praised the Indian government’s hands-on approach.

“The MoHFW (Ministry of Health and Family Welfare) is monitoring the situation daily and India has managed to keep cases low by responding fast and aggressively. There is high-level involvement from the Prime Minister’s Office, which translates into intensified state- and field-level action,” said Dr Bekedam. Praising the rapid expansion of the testing network and the government’s social distancing call, he added, “So far, all the cases in India are linked to index cases traceable through human-to-human transmission.” Fake blood is seen in test tubes labelled with the coronavirus (COVID-19) in this illustration taken March 17, 2020. REUTERS/Dado Ruvic/Illustration

Asked about the WHO’s “test, test, test” advice at a press conference Tuesday, ICMR senior scientist R R Gangakhedkar said, “We are in Stage 2, therefore the WHO does not have country-specific guidelines. We have told the country office that this is not a statement which should have been given for a country like India, because… it creates more fear, more paranoia, and more hype.” Gangakhedkar also said that country strategies cannot be compared because it will depend on the stage each country is in.

ICMR Director General (DG) Balram Bhargava said, “It is reassuring that at the moment there is no evidence to indicate community outbreak.” However, he added, “It is too early to say that we have contained the virus. How strongly we close our borders… should help. We cannot say that community transmission will not happen.”

Read | An Expert Explains: ‘Time to start random testing of people with flu, scale it up if necessary’

Gangakhedkar said, “Do we have evidence to suggest that asymptomatic infections are occurring in the population and they are spreading? If suppose I am getting cases of infection from asymptomatic individuals, and of spreaders, it should mean that I should be able to detect at least a few symptomatic cases.”

The ICMR also said that they have tested more than 11,500 samples so far, including random sampling. The government currently has 1.5 lakh testing kits, and has ordered 1 million more.

On questions about the sample size for random surveillance, Gangakhedkar said, “The samples are proportional to the local universe that is existing there. Twenty per week per lab means 80 in a month who are admitted in intensive care units with severe respiratory illness. Imagine a scenario of how many in an ICU have this, how many ICU beds are there. It is essentially representative for that entire city. Twenty may look like a small size but may not be a small size.”

For the weekly random surveillance test, a total of 121 labs will be functional. Each lab, in medical colleges across the country, has a capacity to provide a result for 90 samples per day, within six hours. This capacity could be doubled to 180 samples per day, the ICMR said.

The current total capacity for more than 70 functioning labs as well and the National Institute of Virology is 8,000 samples per day, but the labs have not been examining more than 500 samples per day. The labs are not even receiving enough influenza-like or severe acute respiratory illness hospitalisations to conduct random sampling on, ICMR Senior Scientist Nivedita Gupta said.

“To avoid indiscriminate testing and reducing panic and optimally utilising the resources of the country to scale up facilities… that is what our objective is,” Bhargava said. “The government has taken a graded approach. It’s a delicate balance between panic and correct management.”

On the WHO’s clinical trials, Gangakhedkar said India has not participated in them because the country may not have enough patients to send samples to the organisation. “It is better that we try to do our own trials with our own logic.”

The corona fighters: Crunching data by day, poetry by night, Maharashtra officer has his hands full