The construction of the project has been stalled for the last four months after the fishermen started a protest against the Rs 7,500-crore project but Adani group decided to resume the work from Saturday after the high court’s intervention. 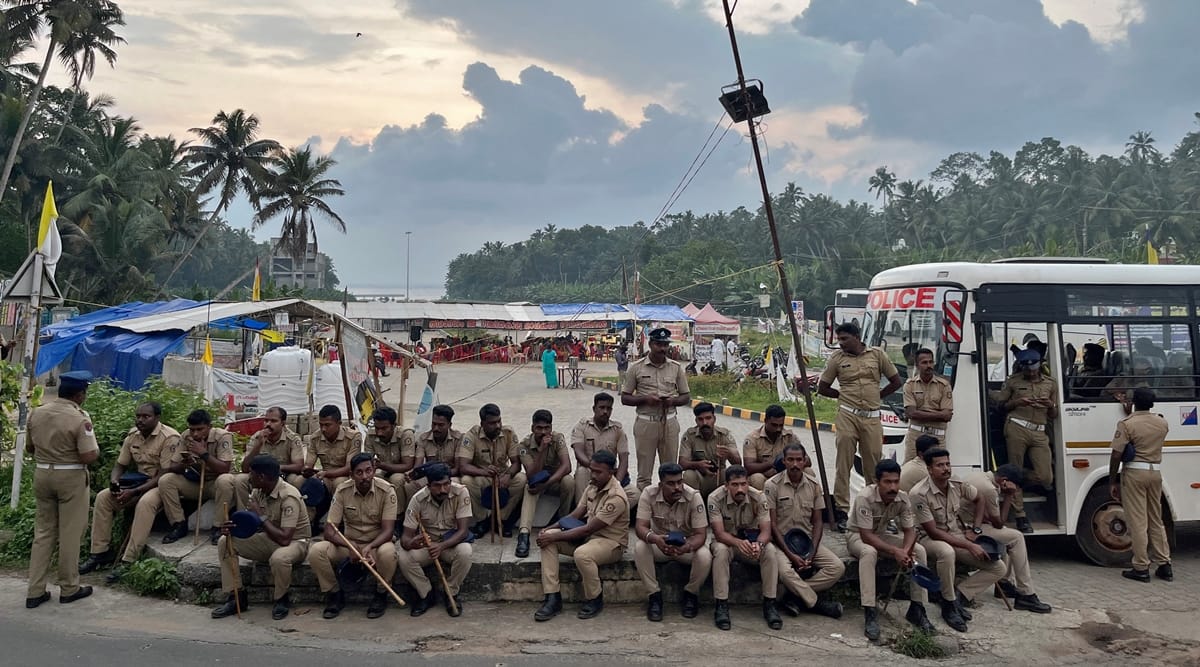 Police officers are deployed as fishermen protest near the entrance of the proposed Vizhinjam Port in Kerala. (REUTERS, file)

Tension gripped the construction site of Adani group’s Vizhinjam International Seaport Limited in Thiruvananthapuram Saturday after fishermen protesting against the project came face to face with activists of various Hindu outfits which want immediate completion of the project.

The construction of the project has been stalled for the last four months after the fishermen started a protest against the Rs 7,500-crore project but Adani group decided to resume the work from Saturday after the high court’s intervention. Accordingly, around two dozen trucks carrying boulders for the construction of breakwater reached near the gate of Adani Ports and SEZ Private Limited but the fishermen, under the leadership of Catholic Church, managed to stop all the vehicles, leading to the tension.

Scores of people under the banner of a local people’s action committee, which has been backing the project, reached the spot. Both sides exchanged heated words and pelted stones at each other even as a strong contingent of police tried to defuse the tension. A few trucks were stoned by the agitating fishermen. Tension eased out only after the trucks were forced to be taken away from the project location.

The Adani group has managed to obtain a favourable order from the high court which directed the state government to provide police protection to resume the work. The high court has also prevented the protesting fishermen from obstructing the construction work.

The fishermen had put forward a seven-point charter of demands and had sought the government to stop the construction work and carry out a scientific study on the impact of the construction along the coastal belt.

While Christian fishermen are against the project, the local people’s action committee has slowly emerged as a strong Hindu voice in favour of the Adani port. For the last two months, this action committee has also been protesting, demanding the completion of the project. The action committee has the backing of various Hindu outfits such as the upper caste Nair Service Society, OBC Hindu organisation Sree Narayana Dharma Paripalana Yogam and Vaikunda Swami Dharma Pracharana, which has considerable stake among the Hindu Nadar community in Southern Kerala. Last month, CPI(M) and BJP leaders had buried their political differences and had shared the dais of the local action committee to support the project.