Around 30 policemen were injured, several vehicles damaged in the attack as tension prevailed in the Vizhinjam region. 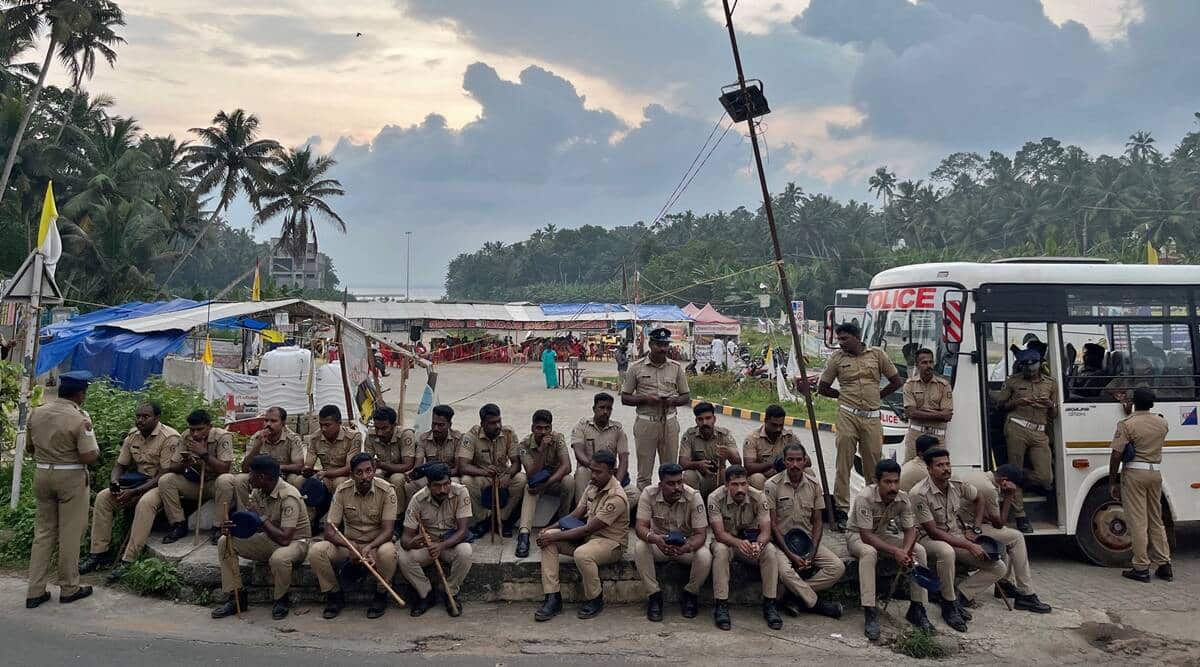 Police officers are deployed as fishermen protest near the entrance of the proposed Vizhinjam Port in Kerala. (Reuters/File)

Around 30 policemen were injured, several vehicles damaged in the attack as tension prevailed in the Vizhinjam region. The police resorted to lathi charge and burst tear gas shells to disperse the coastal people, including women, who had laid a siege to the police station. A large contingent of police has been mobilised to Vizhinjam and nearby areas.

Earlier in the day, the police booked Thiruvananthapuram Archbishop Thomas Netto, auxiliary bishop R Kristudas, and several priests of the archdiocese, in connection with Saturday’s violence during the fishermen protest. (PTI File Photo)

Earlier in the day, the police booked Thiruvananthapuram Archbishop Thomas Netto, auxiliary bishop R Kristudas, and several priests of the archdiocese, in connection with Saturday’s violence during the fishermen protest. The archbishop was made the first accused in the First Information Report. Subsequently, the police took five fishermen into custody in connection with the Saturday’s violence in which fishermen came face to face with local Hindu groups, which have been demanding completion of the Rs 7,500-crore seaport, under construction since 2015.

The clergy were booked under various sections of IPC including criminal conspiracy (Section 120-B), rioting (Section 147), criminal trespassing (Section 447), and assaulting public servants to deter them from discharging official duty (Section 353), among other charges. As many as nine cases have been registered against the clergy and 1,000-odd persons, who on Saturday prevented the Adani Group from resuming construction of the port, which has been suspended for the last four months.

Action council convener Fr Eugene Pereira claimed that provocation by the police had led to worsening of the situation. “The police have arrested the bishops and the priests in the criminal case, and charged them with conspiracy even though they were not part of the agitation. Saturday’s violence was unleashed by the men of Adani (group) with the connivance of police and BJP. We want a peaceful solution to the issue,’’ he alleged.

Protesters belonging to both sides had sustained injuries when they exchanged stones on Saturday. Over two dozen trucks which came with boulders for the construction of the breakwater had to be taken back from the project site due to the stiff resistance from the fishermen.

The Adani Group decided to resume the construction from Saturday in the wake of a High Court order, which had prevented the agitators from obstructing work and asked the state government to provide police protection.

Opposition Leader V D Satheesan blasted the police action against the prelates alleging the government was trying to communalise the issue. “The tension at Vizhinjam is a conspiracy of the state government. The police have registered the case against the archbishop and other priests. If so, will the police register a case against the Chief Minister and the CPI(M) state secretary when CPI(M) men are involved in protests and agitations. This is unprecedented. There is a CPI(M)-BJP nexus in this project to protect the interest of Adani,” he said.