The cone-shaped structure below the driver’s cabin was damaged due to the impact, the officials said and added that after a 26-minute halt for the repairing works, the train was allowed to continue its journey towards Ahmedabad. 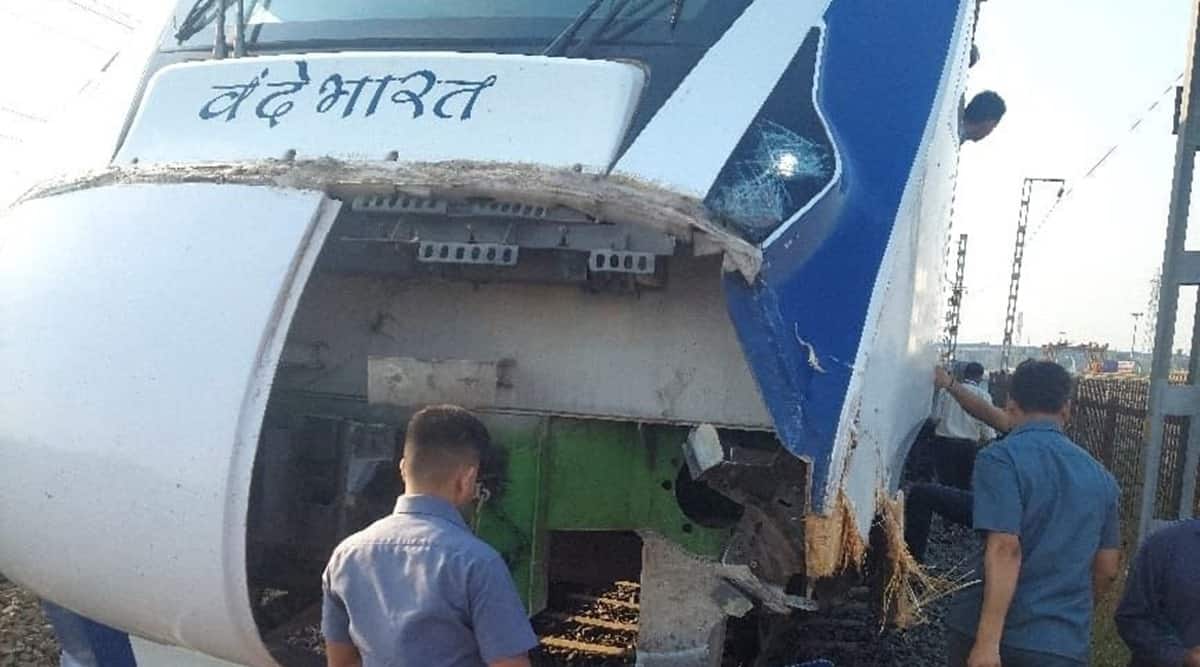 The detained train after collision (ANI)

The third incident of cattle hit by a Vande Bharat Express train in Gujarat took place in Valsad district near the Atul Railway station Saturday morning at 8.17 am, said railway officials.

The cone-shaped structure below the driver’s cabin was damaged due to the impact, the officials said and added that after a 26-minute halt for the repairing works, the train was allowed to continue its journey towards Ahmedabad.

Sources in the Western Railway said the Vande Bharat express train started its journey from Mumbai Central Saturday morning around 6.10 am. On the way, near the Atul railway station, the semi-high-speed train hit a bull. The driver immediately put the train to a halt and intimated the Western Railway control room and Valsad railway authorities.

The engineering staff from Valsad railway station, along with the RPF and the GRP officials, rushed to the spot. With the help of local youths, the carcass of the bull was removed from the tracks and placed on the sideway.

RPF police inspector of Valsad Railway station Gracious Fernandes said, “The incident took place at the end of Atul Railway station at level crossing gate number 94. Gateman Eknath Chaudhary spotted the bull walking on the tracks just a minute before the train arrived and he tried his level best to get it out of the tracks and was successful too but the bull returned to the tracks which led to the incident.”

Sources in the railway department of Valsad present on the spot told The Indian Express that the train was made to halt for around 26 minutes for repair works. The carcass of the bull was later buried. The officials also examined the railway tracks and later found it to be okay.

The railway authorities of Valsad said cattle roam freely for grazing in the bushy areas near the railway tracks. While grazing, they walk on the tracks which lead to the accidents. Officials said if a cattle is hit by a train and nobody comes and claims the carcass, it is buried with the help of local youths.

On October 9, a total of 19 cattle died on the spot after being run over by an Ajmer Mysore Express train at Joravasan village near the Dungri railway station in Valsad district.