Rajnath Singh: We are walking north, have to reach Gilgit, Baltistan

Speaking at the Shaurya Diwas celebrations to mark 75 years of the landing of Indian Army troops at Budgam airfield to protect J&K from Pakistani raiders, Singh said some areas illegally occupied by Pakistan are still devoid of progress and rights. 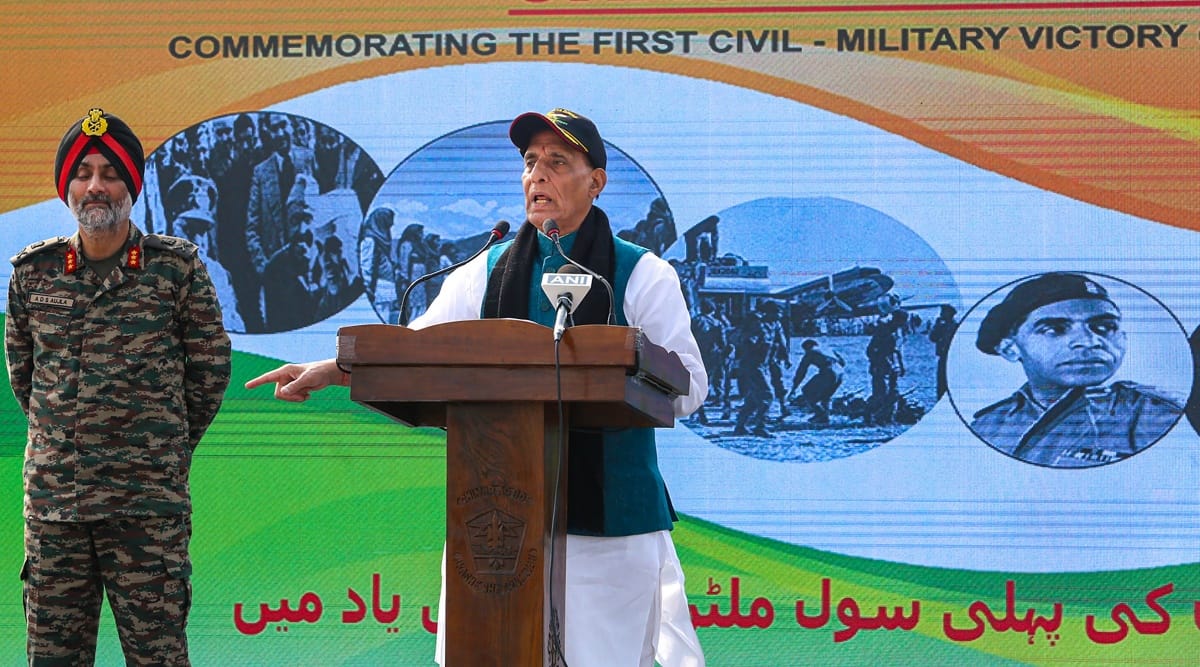 Sending Pakistan a tough message over its “atrocities” on the people of Pakistan-occupied Kashmir, Defence Minister Rajnath Singh said Thursday “we have only just begun walking north, our journey will be complete when we implement the resolution passed unanimously by the Indian Parliament on February 22, 1994 by reaching the remaining parts (of PoK), Gilgit and Baltistan.”

Speaking at the Shaurya Diwas celebrations to mark 75 years of the landing of Indian Army troops at Budgam airfield to protect J&K from Pakistani raiders, Singh said some areas illegally occupied by Pakistan are still devoid of progress and rights.

Explained |Rajnath vows to reach Gilgit-Baltistan: where is this place that is illegally occupied by Pakistan?

Describing the residents of PoK as “innocent Indians,” he said Pakistan is “fully responsible” for the “atrocities” there.

“In the times to come, Pakistan will bear the brunt… We feel their (PoK people’s) pain. The regions of J&K and Ladakh are treading the path of development and touching new heights. This is just the beginning.”

He said the aim of full integration started by Syama Prasad Mookerjee reached its conclusion on August 5, 2019, “when Article 370 was abolished under the leadership of Prime Minister Modi.”

“Despite being an integral part of India,” the State of Jammu and Kashmir, he said, was deprived of development and peace for decades. “J&K was given a so-called ‘special status’ but far from being special, it was deprived of even basic rights,” he said.

“Earlier, some anti-India elements used to disturb peace and harmony in the name of religion, but now there is peace and tranquillity in J&K due to the persistent efforts by the government and the armed forces,” he said.

He said many people tried to link terrorism to a religion, “but were the victims of terrorism limited to one religion?”.

Taking a swipe at the “so-called intellectuals” of the country, Singh said when security forces or civilians are attacked, “where does concern for human rights disappear then?”.

Describing the exodus of Kashmiri Pandits from the Valley as “tragic”, he said when intellectuals of a society remain silent against injustice, “then the downfall of that society does not take long”.

In his address, the Defence Minister paid rich tribute to the “heroes of the armed forces and the people of J&K” who laid down their lives to protect the unity and integrity of the country. He said it is because of their valour and sacrifice that J&K has remained and will continue to be an integral part of India.

Grievance panels for social media: Govt to go ahead despite concerns