The encounters took place when a joint team of J&K Police, Army and paramilitary forces cordoned off Tulran and Feeripora after specific inputs about presence of militants in the two villages. 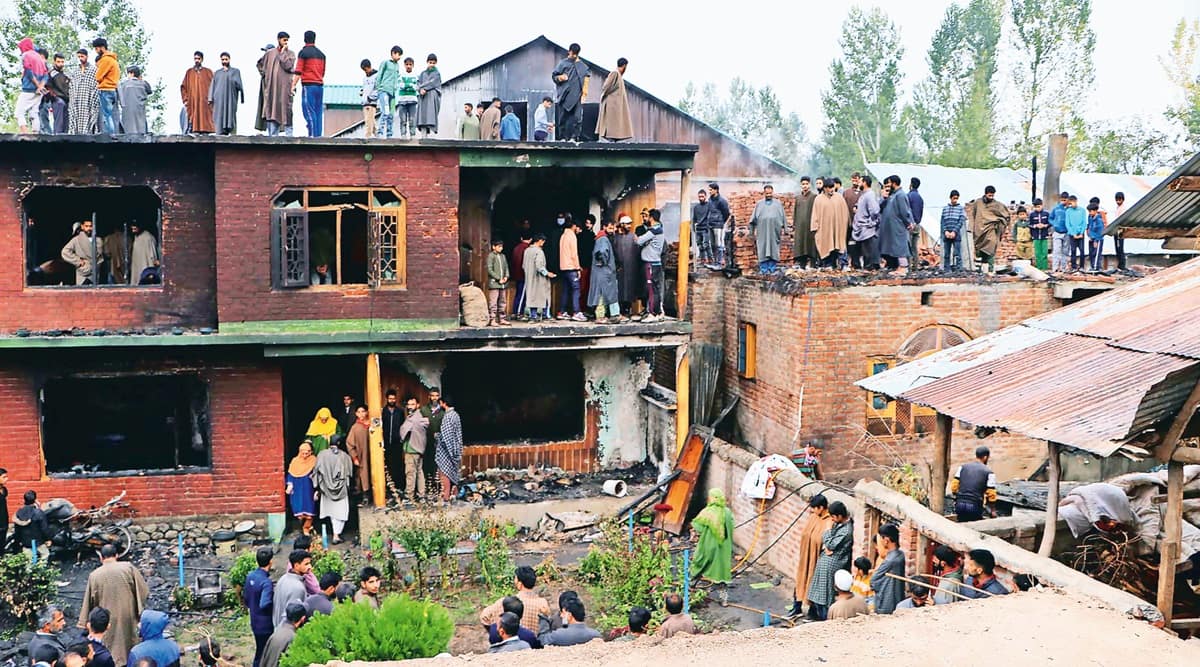 People inspect a partially damaged house at the site of the encounter in Shopian’s Tulran village. (Photo: Shuaib Masoodi)

FIVE MILITANTS were shot dead in two separate overnight operations in south Kashmir’s Shopian, which began Monday evening, according to police. Among those killed is a militant who was responsible for the killing of a street vendor from Bihar in Srinagar on October 5, they said.

The encounters took place when a joint team of J&K Police, Army and paramilitary forces cordoned off Tulran and Feeripora after specific inputs about presence of militants in the two villages.

While three militants were killed in the encounter at Tulran, two were killed at Feeripora.

“During the search operation at Tulran, as the presence of terrorists got ascertained, they were given repeated opportunities to surrender. [However] they fired indiscriminately upon the joint search party, which retaliated, leading to an encounter. Due to darkness, the operation was suspended,” the police said in a statement on Tuesday.

Early on Tuesday, repeated announcements were again made for the militants to surrender but they again opened fire on the joint search party. “In the ensuing encounter, three terrorists were killed,” the police said.

The three militants were identified as Danish Hussain Dar of Kapren Shopian, Yawar Hussain Naikoo of Pahlipora and Mukhtar Ahmed Shah of Sindbal in Ganderbal. The police said they belonged to The Resistance Front (TRF), an offshoot of Lashkar-e-Toiba.

The police said Shah was involved in the targeted killing of Virender Paswan, a paani puri vendor from Bihar. Paswan was shot dead on the evening of October 5 at Lalbazar neighbourhood of Srinagar. After killing the street vendor, Shah had shifted to south Kashmir, the police said.

With Shah’s killing, two of the four recent cases of targeted killings in the Valley have been solved, the police said. On Monday, they said, a militant responsible for the killing of a civilian at Hajin village of Bandipore was shot dead in a gunfight.

Around 10 am, police said, contact was established with the hiding militants and they were asked to surrender. However, they started firing indiscriminately at the search party, leading to an encounter. “In the ensuing encounter, two terrorists were killed,” police said.

The militants killed in Feeripora were identified as Ubaid Ahmad Dar of Kapren and Khubaib Ahmad Nengroo of Braripora. Both belonged to Lashkar-e-Toiba.

PTI adds: Security agencies have identified a group of four militants, led by 25-year-old Basit Ahmed Dar from Kulgam, who they believe were responsible for the civilian killings in Srinagar last week.

Officials said the group was involved in the killing of Kashmiri Pandit businessman Makhan Lal Bindroo, who owned a chain of medical shops, school principal Supinder Kaur and teacher Deepak Chand. They said Dar had been under the scanner earlier also as he worked with Abbas Sheikh, the self-styled chief of TRF. The officials said security agencies gathered CCTV footage and joined the dots to zero in on the squad. Two of the other militants were identified as Mehran Shalla and Adil.