The “targeted killing” of a Sikh woman principal and a Kashmiri Hindu teacher in Srinagar has left them edgy and suspicious of all. 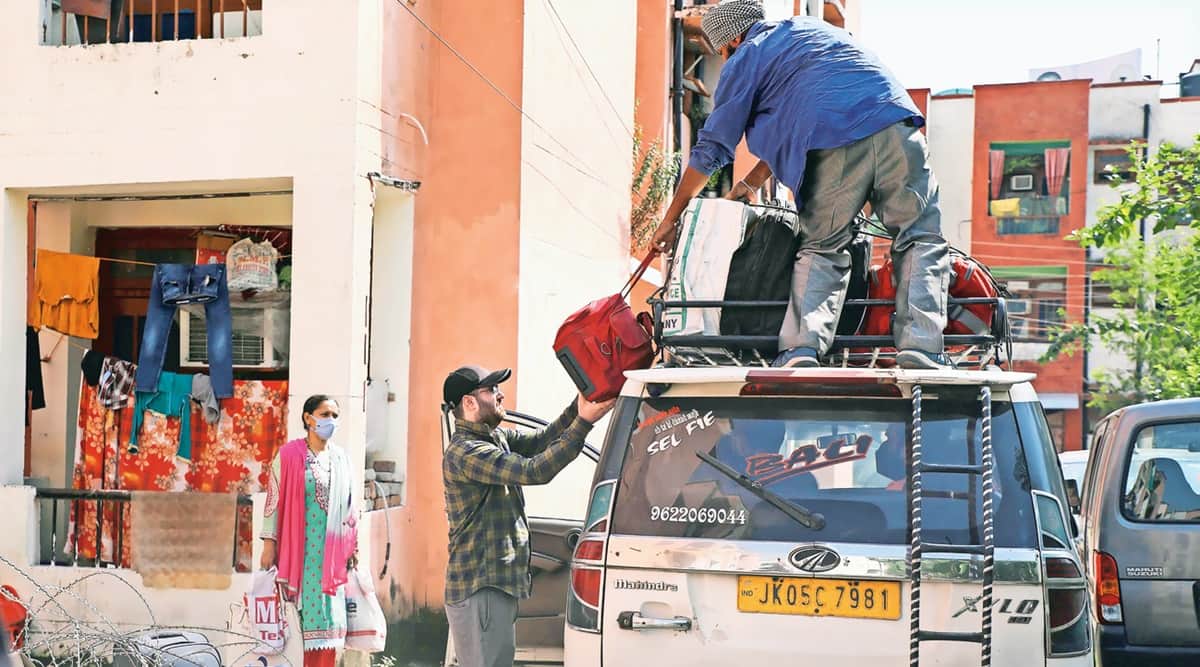 A sense of anxiety and fear has gripped the minorities in the Kashmir Valley, with several government employees and teachers belonging to Kashimiri Pandit and Sikh communities returning to Jammu, some seeking transfer, and many staying away from work, due to rising worries about safety.

Susheel, a junior assistant with the Education Department in Srinagar, returned to Jammu in the early hours of Friday. “Hum Kashmir se bike par bhagey hain (We fled Kashmir on a bike),” he said.

The “targeted killing” of a Sikh woman principal and a Kashmiri Hindu teacher in Srinagar has left them edgy and suspicious of all. “Kashmir mein sadak par chaltey huey humey ek hi khayal aata raha ke jo koi bhi humari taraf dekh raha hai, woh humey goli mar dega (Along the roads in Kashmir, we suspected anyone looking at us, worried he would shoot us),” Susheel told The Indian Express.

Safety seems to be the paramount concern for those returning to Jammu. Siddharth Raina (name changed) was just two years old when his family fled Kashmir in 1990 along with a lakh plus Pandits following threats and killings in 1990. Two-and-a-half decades later, he returned to Srinagar in 2015 with a job in the J&K Education Department under the Prime Minister package.

On Friday, Siddharth left Anantnag with his wife for Jammu after what he describes as a “sleepless and fearful night”. “I couldn’t sleep the whole night and left the very next morning for Jammu. There are loose utterances of harmony and peace, but no security has been assured. If they could walk up to the teachers and kill them after seeing their identity cards, who will guarantee security for Kashmiri Pandit employees like me,” he told The Indian Express over phone from Jammu.

Susheel said his Muslim colleagues were helpful, but it’s for the government to think if minority community employees can feel secure in such circumstances. “The minority community teachers are posted in far off hilly areas in the Valley. What can they do except return to Jammu?”

The J&K government denied any ‘reverse migration’ of minority community employees posted in the Valley under the PM package. “We have taken up the matter with Kashmir Divisional Commissioner seeking directions to all the Deputy Commissioners in the Valley to ensure increased security for employees living in secured government accommodations in their respective districts,’’ J&K Relief and Rehabilitation Commissioner Ashok Pandita said.

But evidence on the ground suggests many are returning. Ramesh Kumar, a provision shop owner at Jagti township, a settlement near Nagrota in Jammu inhabited by migrant Kashmiri Pandits, said many employees posted in Kashmir under the PM package have returned. “I have met at least 30 today since they came to shop after 2-3 months. They said they fled the Valley… some said they left around 12 midnight.”

“Jo healthy ladke thhey na, woh bhi aaj becharey haar gaye (Even men with good physique lost their courage),” shop owner Ramesh Kumar said. Even as he was speaking with The Indian Express, two families arrived in separate vehicles from the Valley. They were reluctant to speak and rushed to their quarters. A neighbour explained that they feared pressure from the government to return to their duties in the Valley.

An employee in the Finance Department in Pulwama returned along with his wife and two children Saturday afternoon. “I did not want to come back, but my parents in Jammu insisted we come for some days until the situation normalises,” he said not willing to be named.

Another migrant Kashmiri Pandit said his son along with his wife and two minor children had left Kupwara. “They are reaching here by evening. There is little one can do under the present circumstances especially when living in a rented place outside the secured accommodation,” he said requesting anonymity.

Kashmiri Pandits who didn’t leave even in 1990 are adopting a wait-and-watch mode. A heightened sense of fear since last week has made them move around with a lot of caution. “Unlike 1990, there is a greater fear and I suspect almost everyone around me. The acts of killing with pistols seems to show that they are not even undertaking arms training like earlier times. The resentment against outsiders started to build up after the abrogation of Article 370 and the recent worsening of situation in Afghanistan has made it worse,” Rohit Pandita (name changed), a 54-year-old shop owner at one of Srinagar’s upmarket locations said.

Pandita is, however, not planning to leave. “I had 4-5 shops earlier and now run one shop. I have stayed all these years and will stay on. The killings are happening on both sides of the divide, but the government is silent,” he said.

KL Singh (name changed), a Sikh businessman in Srinagar, who stayed on in the 1990s, said Sikhs are feeling scared for the first time in so many years. “The fear has been put in our minds. For the first time, a lady from our community has been killed at point blank range. She was doing a humanitarian act of helping a Muslim girl’s education yet was killed. This is an extreme act and won’t be tolerated by us,” Singh, who is also a member of the Gurudwara Prabandhak Committee, Srinagar said.

“My nieces, who work as teachers in far-flung areas of Kashmir, have stopped going to work. They are asking for safer postings. The recent directive for hoisting flags on August 15 was for everyone including Muslims and not only for the Sikh or teachers from other minority communities. But the minorities have been singled out. I have not seen this level of fear and silence in so many years here. The killings of minorities need to be openly condemned by the majority community,” he said.

At a press conference Saturday, Sikh leaders said the Sikh community would not be deterred by the killing of its members. “They (killers) may be thinking that by killing four Sikhs or ten Sikhs, the Sikhs would leave Kashmir,” said Joginder Singh Shan, Minority Affairs Secretary of the Peoples Democratic Party and a prominent Sikh leader. “We are not going to leave Kashmir because of these murders. This is our Kashmir. In 1947, 33,000 Sikhs gave blood for it (sic).”

The Sikh leaders said identifying and killing members of the minority community has shocked them. “Our grievance (with the Muslim community) is that when we took the procession for cremation and protested outside the (civil) secretariat, they didn’t join us. Our grievance with the government is that two or three members of the community had already been killed but they didn’t take any solid steps for the safety and security of the minority employees,” said another Sikh leader Navtej Singh.