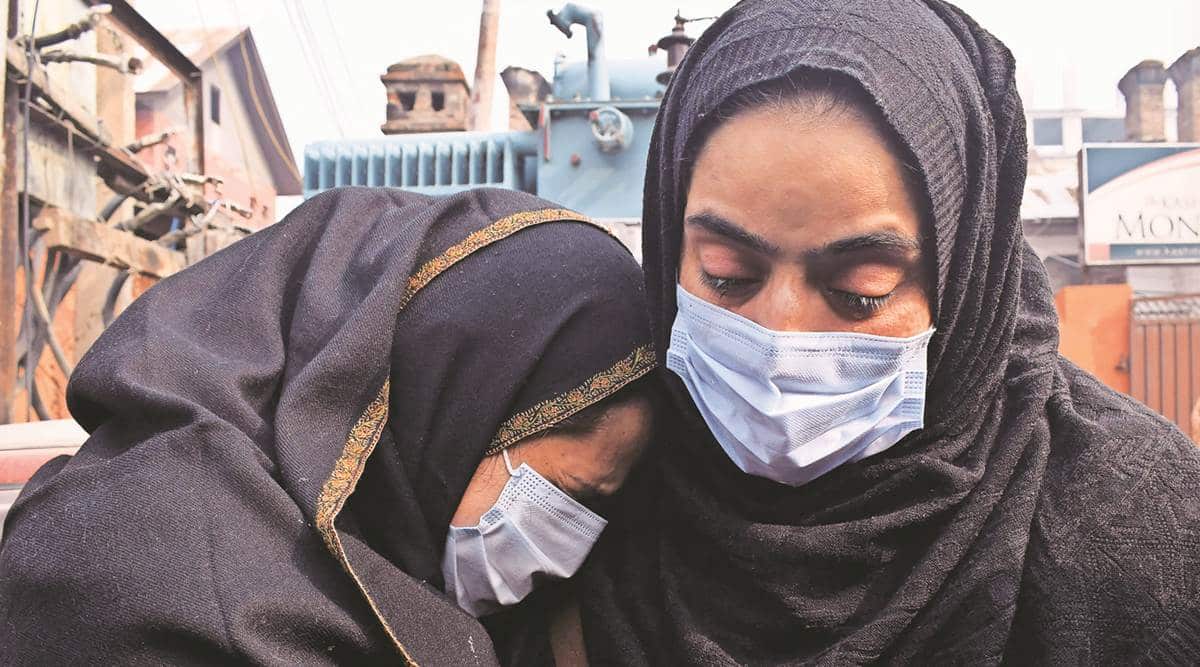 Hours after four persons were shot dead Monday night in Srinagar, the J&K Police said they had busted a terror module, a claim that families of three among the dead contested.

Calling them “innocent”, the families demanded that the bodies of the three men, buried by police, be turned over to them.

Leaders of J&K mainstream parties called for an “impartial” and “credible” inquiry into the killings to “bring out the truth”.

“He (Gul) was running a fake/unauthorised call centre from here. One of the rooms was being used as a militant hideout,” he said.

According to the IG, police received inputs Monday afternoon about the presence of militants near Hyderpora bypass.

“Forces laid a cordon and started search operations. There are three rooms on the top floor. We did not know the exact location, so we called the owner of the building (Altaf) and the person who had rented the place (Gul) and was running his business from there.”

Kumar said “both knocked on the door but the militants did not answer. After a while, they knocked again and this time militants opened the door and fired from a pistol. Our people also fired in self-defence.”

#SrinagarEncounterUpdate: The house owner who was injured in terrorist fire, succumbed to his injuries. #Terrorists have been hiding on top floor of his building. As per source and digital evidence, he has been working as #terror associate. Search is still going on: IGP Kashmir https://t.co/rRfPbiqq1C

He said attempts were made to rescue the two civilians. But “they were standing at a difficult spot and were injured in the pistol fire from the militants. Both succumbed and the two militants were also killed,” he said.

Kumar later told The Indian Express: “When someone gives shelter/hideout to active terrorists in his house/shop/workplace intentionally, such persons must know the potential consequences and operational hazards.”

The four men were buried in Handwara, over 70 km from Srinagar.

Meanwhile, the family of the building owner said his real name was Altaf Ahmad Bhat. An eyewitness to the incident said security persons in plain clothes first approached the building and asked shop owners to down shutters. About 30 people, the eyewitness said, were herded into a motorcycle showroom about 50 metres from the building.

“Our phones were taken away at about 5.30 pm, just after they laid the cordon, and not returned till after 12.30 am,” the eyewitness said.

At least three eyewitnesses said Altaf and Gul were taken by the security persons to the building.

“The second time, 20 minutes after the first, we heard gunshots and then they did not come back,” one of them said.

IG Kumar said that of the two militants, one is “probably a Pakistani militant” named Ali Alias Bilal Bhai or Haider. The second militant, he said was a local resident from the Banihal area of Kashmir.

Altaf’s eldest brother Abdul Majid Bhat said while he had “no hope of justice from those who had killed innocent civilians”, the family just wanted his body back because, by the IG’s own admission, Altaf was killed in crossfire.

“How shall I explain it to my brother. He is much younger than I am. He doesnt know anything. He is so attached to his father and so am I.” Daughter of Altaf Ahmed who was killed in an Hyderpora encounter. pic.twitter.com/5ILXTGP86D

The family of Mudasir Gul held a funeral in absentia for him at Nowgam, Srinagar.

IG Kumar claimed Gul was a “top terror associate”, and that “he was running a fake/unauthorised call centre from here. One of the rooms was being used as a militant hideout”.

Police said they found two pistols, three magazines from the room. “On Sunday, an attack took place on a police party in downtown Srinagar and a policeman was injured. This militant was involved in it. Gul brought the militant in his car to the Hyderpora building,” Kumar said.

He claimed Gul “used to bring militants from North and South Kashmir to this building. Since he was harbouring militants, we considered him an OGW, but he died in cross-firing. We regret these killings.”

After failing to secure his son’s body, Gul’s father Ghulam Mohammad said: “This is a story they have concocted. What can I say about this now. We struggled to get his body all day, but the DIG told us that they will not give us the body.”

Political parties in the Valley condemned the killings and demanded a probe into the encounter.

National Conference vice-president and former Chief Minister Omar Abdullah said an “impartial” and “credible” inquiry into the Hyderpora encounter is “an absolute necessity”.

An impartial & credible inquiry in to the recent encounter in #Hyderpora is an absolute necessity. There are far too many questions being raised about the encounter & about the people killed.

He said there are “far too many questions being raised about the encounter and about the people killed”.

“There have been numerous instances of fake encounters in the past and the questions raised about this… encounter need to be answered swiftly & in a credible manner,” Abdullah said in a Twitter post.

“Using innocent civilians as human shields, getting them killed in cross firing & then conveniently labelling them as OGWs is part of GOI’s rulebook now. Imperative that a credible judicial enquiry is done to bring out the truth & put an end to this rampant culture of impunity,” she said on Twitter.

People’s Conference chairman Sajad Lone said that given the conflicting claims, “the least we deserve is a transparent description of what happened by a neutral institution”.

CPM leader M Y Tarigami and the state Congress also sought a probe into the encounter. The All Parties Hurriyat Conference, chaired by Mirwaiz Umar Farooq, sought “justice” for those killed and said the bodies must be immediately returned to the families “so that they can at least give them a proper family burial and get closure”.

Why this sudden ban, what do we do: anguished Gujarat food vendors