Agriculture Minister Raghavji Patel launched the groundnut procurement drive by the state government from a procurement centre on the yard of agricultural produce market committee (APMC) in Dhrol town of Jamnagar. 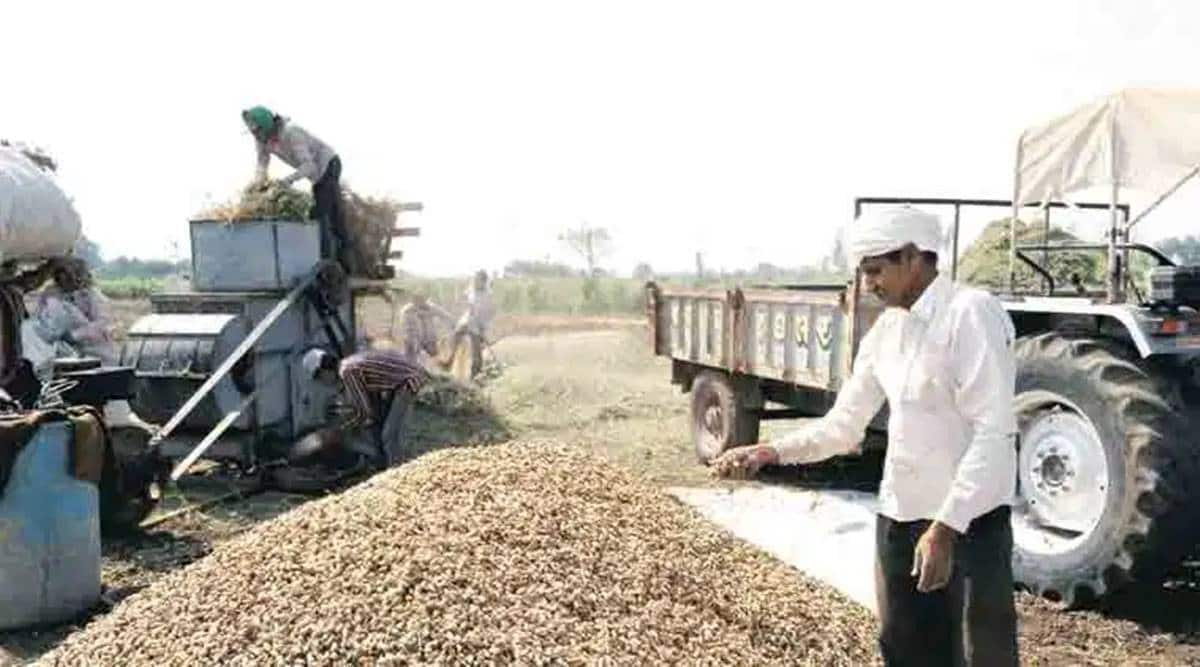 Groundnut is the second most important cash crop of Gujarat after cotton. (File)

The state government is ready to procure 50 quintals of groundnut per farmer instead of the routine 25 quintals as the Centre has allotted Gujarat a quota of around 10 lakh metric tonnes at minimum support price (MSP), Agriculture Minister Raghavji Patel said on Tuesday. On the opening day, 1,508 quintals of groundnut was procured from 75 farmers, officials said.

Patel, an MLA from Jamnagar (Rural), launched the groundnut procurement drive by the state government from a procurement centre on the yard of agricultural produce market committee (APMC) in Dhrol town of Jamnagar. Procurement will be held at 155 centres in 28 districts.

Interacting with journalists after launching the drive, the minister said, “The drive has begun on the auspicious day of Labh Pancham… We are procuring groundnut at MSP of Rs1,110 per mann (five mann make one quintal). In the first round, a farmer will be able to sell a maximum of 125 mann to the government. But if he has more groundnut left after that, the government is ready to procure an equal quantity from him in the second round,” said Patel.

Agriculture Minister’s announcement of double procurement of groundnut from each farmer comes in the backdrop of just 2.65 lakh farmers registering to sell their produce at MSP in a year in which groundnut production is estimated to remain 40 lakh tonnes. Government procurement has been falling since 2018-’19 season and last year, only half of the quota could be utilised.

Later, the Minister told The Indian Express that the government has decided to double the per-farmer quota this year, thanks to the Central government allotting an all-time high quota of groundnut procurement to Gujarat but a limited number of farmers registering themselves to sell their produce to the government.

“This year, the Centre allotted Gujarat a quota to procure 9.98 lakh metric tonnes of groundnut from farmers. But the number of farmers who have registered for selling their produce at MSP is just 2.65 lakh. Farmers are preferring to sell them in the open market… Traders are directly purchasing from farmers at around Rs1,100 per mann,” said Patel.

Under its price support scheme (PSS), the Central government intervenes in the market and makes physical procurement with an objective to influence market rates and ensure that farmers get remunerative prices.

The Central government usually sets the target of procuring 25 per cent of the total crop in a state in the Kharif marketing season. The Gujarat government’s First Advance Estimate for 2021-22 estimates groundnut production in the state to be 39.94 lakh tonnes.