The video went viral on social media on Thursday and local TV channels also aired it, prompting the hospital administration to clarify that the staff was merely restraining the patient, identified as 38-year-old Prabhashankar Patil. 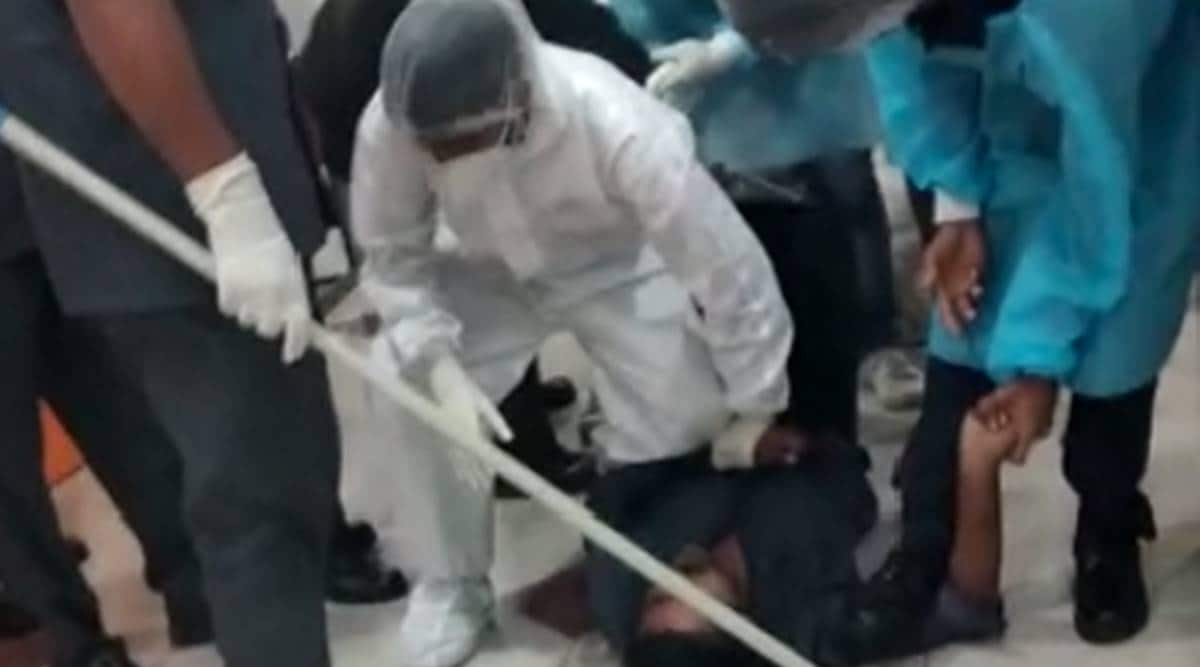 In the 55-second video, a paramedic is seen pinning the patient to the ground by placing his knee on his chest even as others hold his hand and security guards, one of them wielding a baton, look on.

A video of paramedics pinnig down a Covid-19 patient to “restrain” him went viral on Thursday, four days after he died, leading his family members to allege that he died due to the beating and not the viral infection.

The patient in the video identified as Prabhashankar Paatil, 38, was shifted to the state government-run PDU hospital on September 8 after undergoing a kidney procedure at Giriraj Multispecialty Hospital in the city where he was found to be infected with the coronavirus.

In the 55-second video, purportedly of September 9, a paramedic is seen pinning Paatil to the floor by placing his knee on his chest even as others hold his hand and security guards, one of them wielding a baton, look on.

“Didn’t I tell you not to do it?,” the paramedic wearing a white PPE is heard telling the patient even as Paatil pleads, “Wait, please wait!”

The paramedic is then heard saying that policemen are coming and as the patient tries to escape, the security guard wielding the baton pushes him down to the floor again by placing his foot on Paatil’s shoulder, while the paramedic slaps the him in his face. Paatil is heard crying, “corona….corona…!”

“Nothing will happen to you due to corona,” a female staff member is then heard telling the patient. Patil died on September 12.

The video went viral on social media on Thursday and local TV channels also aired it, prompting the hospital administration to clarify that the staff was merely “restraining” the patient.

Ravi told The Indian Express, “He (Paatil) was in a very acute stage of delirium. He had no orientation. He was running around and had taken off his clothes. He even tried to throttle one of the patients lying next to him…”

Adding that the staff handled him appropriately, she said, “It is unfortunate that he died. But his is a very sensitive issue and the media should look at it at as such.”

Dr Pankaj Buch, medical superintendent of PDU Hospital issued a video statement saying, “Today, a video is being aired on some news channels and other outlets. In this video of a patient named Prabhashankarbhai Paatil, I wish to inform that the said patient was corona positive, and additionally had ailments of diabetes and hypertension.”

“ According to the opinion given by our psychiatry department, at the time the video was shot, he had a bout of hysteria and started running around, attempting to remove intravenous tube and Ryle’s tube… he was taking off his clothes and behaving in a manner that he could harm himself and other patients. When persuading him didn’t work, he was restrained,” Dr Buch added.

He said that the staff eventually managed to restrain Patil and stabilised him after giving him injections in consultation with the psychiatry department.

Ravi said, “Paatil had a mental illness… Dr Monali Mankodi, the trouble-shooting officer, said he was impatient to go to the window and sit there… In order to ensure that he didn’t topple over ventilators of other patients, our staff handled him properly…. In the video also, you must have noticed that no one has beaten him.”

When pointed out that the video actually showed otherwise, Ravi said: “He was restrained. They tried to control him…”

“…when such mentally ill people go down with illness like Covid, their aggressive behaviour comes to the fore. But even they have to be handled with sensitivity… and that is exactly what our team has done,” the health secretary added.

However, Paatil’s family rejected the hospital’s claim. “He never had any mental illness. He was admitted to civil hospital on Tuesday (September 8) and we could never talk to him directly after that. He did not have a phone with him. Whenever, we approached the hospital help centre, we were told that my brother was asleep or is not in a condition to talk,” said Vilas Paatil, the victim’s younger brother.

“On the September 12 morning, we were told that his condition was fine and that he had had breakfast also. But by evening, we got a call that he had died. It was only today (September 17) that we came to know that he was beaten up,” Vilas told The Indian Express over phone from Indhave village in Maharashtra’s Jalgoan district, where the family hails from.

“He didn’t die due to coronavirus but due to beating. His body was taken to Ramnathpara crematorium and I saw that he was wearing the same shirt. I also noticed black spots on his face which could be result of beating,” Vilas added.

The two brothers migrated to Rajkot around 15 years ago, he said, adding Prabhashankar was working as a machine operator at a forging company.

Giriraj Multispecialty Hospital, a private hospital located on the 150 Foot Road of the city, confirmed that Paatil had undergone a surgery there.

“He was referred by some other hospital with complaints of fever and other complications… there was pus accumulation in his kidney. He had pyelonephritis and his creatinine level was high. We had to perform an emergency operation on him. However, his condition didn’t improve and therefore his Covid-testing was done, which returned positive. As we are not authorised to treat Covid patients, he was referred to civil hospital,” Dr Pratik Amlani, the urologist who had treated Paatil at Giriraj hospital said.

Dr Amlani said that the patient was in a critical condition when he was referred to the civil hospital.

Vilas added that he would report the matter to police after returning to Rajkot from his village after completing rituals post his brother’s death.