Gujarat: In veiled attack on AAP, PM says Congress has ‘outsourced’ job of attacking him 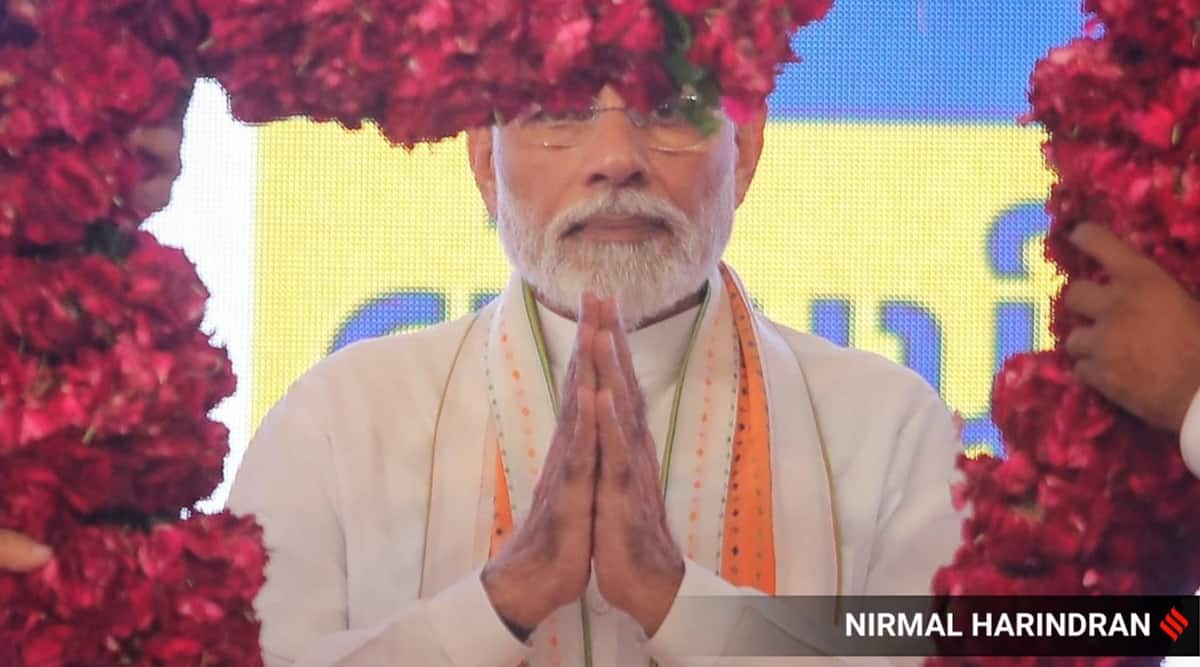 Prime Minister Narendra Modi at an event in Ahmedabad on October 10. (Express Photo/File)

In yet another veiled attack on the Aam Aadmi Party (AAP), Prime Minister Narendra Modi on Tuesday suggested that Congress and AAP were working hand-in-glove, hinting that Congress had “outsourced” the job of attacking the BJP to the latter, choosing instead to campaign silently in villages.

Addressing a massive election meeting at Jamkandorna village in poll-bound Gujarat’s Rajkot district, Modi said that generally, Congress would launch an all-out attack on him during an election. However, this time, he said, Congress was trying a new trick.

Without naming AAP, the PM alleged that Congress has “outsourced” the task of attacking him and the BJP. “They (Congress) are doing all sorts of things while outsourcing the contract of creating scenes and hurling abuses at others. They are telling them (the outsourcing agency) to do the job of disturbing the atmosphere in Gujarat; shout loudly, create a ruckus, use foul language etc. Having outsourced this job to them (the contractor), it is going to villages and campaigning,” said Modi, adding that he felt it was his duty to warn BJP workers, supporters and people of Gujarat about this new trick. “Do see through this trick of theirs and I trust that the people of Gujarat will defeat this ploy also,” Modi said, asking the audience in his signature style if they would do it or not.

Assembly polls in Gujarat are scheduled to be held in December this year.

“This time around, they are using a new trick. There is a need to identify their trick. You would have seen that this time around, Congress is not holding any meetings and press conferences. Even if it does, it is neither attacking Modi nor using any foul words. The reason is, they are trying a new trick—that no one shall speak, no one shall create a ruckus and instead do khatla bedhaks away from public glare. It is sending to villages its people (workers) who are bowing down to people, crying in front of them and pleading to (voters) help them at least once,” Modi said.

Khatla bedhaks are a mode of campaigning in Gujarat where a politician assembles a few families in a section of a village, sits in khatlas or charpois (bedsteads) and talks about politics and elections.

Modi’s swipe at Congress and AAP came a day after he claimed that “urban Naxals” were now trying to land in Gujarat through the air route after he had stopped their entry into the tribal belt of the state through the land route.

The PM also said that sitting in Delhi, he was able to see the larger picture of Gujarat and also the “tricks” played in Delhi against the state. “When BJP workers and supporters are present here in big numbers and the public is also here to bless us, it becomes my responsibility to warn you all. While sitting in Delhi, I can see things from afar. It is like if you are watching cricket from inside the stadium, you need to pan your eyes from one side to the other to see in which direction the ball is struck. But if you watch it on TV, you can easily make out the direction in which the ball is hit. Similarly, I am able to comprehend things better while sitting at a distance. I also gather the kind of games being played in Delhi against Gujarat,” the BJP leader said.

Modi alleged that Opposition parties had tried to defame him and Gujarat during previous elections too. “There were no limits to the tricks that were being played every day for votes. But all their tricks failed. You must have seen the kind of foul words that were used for me every election—beginning from maut ka saudagar, they did not spare anything,” Modi, who was the chief minister of Gujarat from 2001 to 2014, said, adding, “But Gujarat grinned and gave strong replies and yet they are not mending their ways.”

The people of the state have rejected all such elements, the Prime Minister said. “The people whom Gujarat rejected, and you must have seen during elections in the past, they have been trying their tooth and nail to harm the interests of Gujarat. They spared no effort to harass me…to defame Gujarat. Tricks were played in courts and offices every day to defame Gujarat. But Gujarat has emerged from the furnace, like refined gold. People of Gujarat countered all those ignominies with patience and persistence and today Gujarat is shining,” Modi said, apparently referring to being questioned by a Special Investigation Team in connection with the post-Godhra riots of 2002 and the BJP’s electoral success in the state since 1995. The BJP has been ruling Gujarat for the past 27 years.

ICC reprimands Aaron Finch for use of ‘audible obscenity’