Pune rain HIGHLIGHTS: Search and rescue operations have been called off. Three persons were taken out alive and are being treated at a hospital for multiple serious injuries. A stop work order has been issued at the construction site.

At least 15 people, including four children, were killed Saturday morning after a compound wall collapsed at a construction site in Pune’s Kondhwa area. All 15, belonging to families of labourers, were housed in temporary shelters built at the site near Talab Masjid. Maharashtra Chief Minister Devendra Fadnavis set up an inquiry and announced compensation of Rs 4 lakh for the next of kin.

Search and rescue operations have been called off. Three persons were taken out alive and are being treated at a hospital for multiple serious injuries. A stop work order has been issued at the construction site.

Speaking to The Indian Express, Maharashtra Revenue Minister and Pune Guardian Minister Chandrakant Patil said most of the deceased are from Bihar.

Pune wall collapse HIGHLIGHTS: Rescue operations have been called off, where several people are feared trapped under the debris. For the latest updates below.

The residents of Alcon Stylus alleged that they had cautioned the developer of the housing society about the dagerous condition of the retaining wall of one of the buildings five monthe ago, however, no action was taken, PTI reported.

"We had a meeting on February 16 with Vivek Agarwal (a partner at Alcon Landmarks) over the pending works. We highlighted the condition of the wall, told him that it was tilting outward and its construction quality was not satisfactory," PTI quoted a resident of the housing society as saying.

A case of culpable homicide has been registered against the developers of two residential projects, site engineers and labour contractors, PTI quoted an officer.

Intensity of impact increased as many cars parked along wall: Pune MC commissioner

Pune Mumnisipal Corporation commissioner Saurabh Rao said the incident took place between 1.30 am and 1.45 am at Kondhwa. He said prima facie, it appears the soil may have loosened due to heavy rain coupled with the excavation work that was carried out "irresponsibly" close to the retaining wall of the housing society. The intensity of the impact increased as many cars parked along the wall inside the society too fell on the shanties, officials said.

"Deep excavation work was going on at the site adjacent to the Alcon Stylus society. The retaining wall which caved in was located between the under-construction site and the housing society," Rao said.

Sharma, who survived the accident with minor injuries, said he was saved due to a tree trunk as the stones and vehicles which came sliding from above were stopped by the tree. He started shouting for help as loud as he could. People from nearby societies rushed to his help and rescued him from behind the tree. He lost his younger brother in the incident. 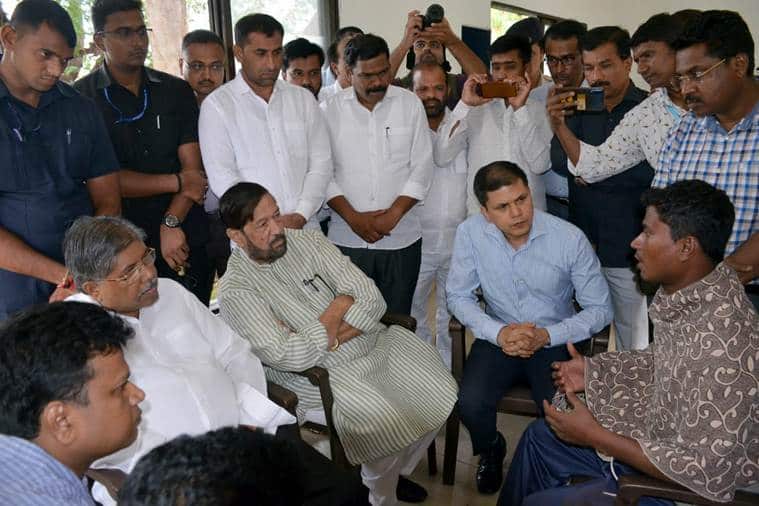 Governor Ch Vidyasagar Rao also expressed grief over the incident. "I was deeply saddened to know about the death of innocent workers, including women and children in the incident of collapse of a compound wall of a residential complex in Pune. Every life lost in incident was precious. My heart goes out to the kin of all those who lost their loved ones, and wish speedy recovery to the injured," he said in a statement.

NDRF will give Rs 4 lakh compensation to each victim: Maha min Patil

Bihar CM Nitish Kumar expresses grief at the loss of lives of 15 people, hailing from Katihar, in the Pune wall collapse incident. Kumar has announced ex-gratia Rs 2 lakh each to the next of the kin of the deceased and a compensation of Rs 50,000 to the injured. (ANI)

Maharashtra Revenue Minister and Pune Guardian Minister Chandrakant Patil said that a committee has been constituted to probe the incident and the mandate would be to look into everybody at the construction site. "The three-member committee has been given the mandate to look into who were the developers, architects, structural engineers involved at the said construction site and the one next to it. It will also look into how these labourers were brought to the site and if all the adequate procedures were completed for their employment," he said.

The committee, comprising an additional collector, a police officer and one municipal officer, will submit a report within 24 hours. Further action will be taken after the submission of the report.

Bimal Sharma, who survived the accident with minor injuries, said he was saved due to a tree trunk as the stones and vehicles which came sliding from above were stopped by the tree. He started shouting for help as loud as he could. People from nearby societies rushed to his help and rescued him from behind the tree. He lost his younger brother in the incident.

Bodies to be sent to families in Bihar after post mortem: District collector Naval Kishore Ram

District collector Naval Kishore Ram said that the dead bodies of 15 labourers who died in the incident will be sent to their families in Bihar by today evening or tomorrow morning. "Once the post mortem are completed we will send the bodies via flights to Patna. From there they will proceed to their villages in Katihar for cremation," said Ram.

NDRF team carrying out search and rescue operations in Pune

Team of NDRF carrying out search and rescue operations at the site of the wall collapse in Pune’s Kondhwa.

Among the deceased are 10 men, one woman and four children — three boys and one girl. Three persons, two men and one woman, were taken out alive and are being treated at a hospital for multiple serious injuries. The Maharashtra government is coordinating with the Bihar government for helping families of the deceased. Maharashtra Congress chief and former Chief Minister Ashok Chavan also expressed his grief over the incident and urged the state government to extend all the help to the families of the dead and injured. Chavan said an inquiry should be carried out "so that the guilty can be punished". (PTI)

Maharashtra Revenue Minister and Pune Guardian Minister Chandrakant Patil said, ”Most of the deceased are from Bihar and we are coordinating with the state government there for helping families. A compensation of Rs 4 lakh per deceased person has been announced from the National Disaster Relief Fund to the family members.”

Patil further added, “A committee comprising of an additional collector, a police officer and one municipal officer has been formed to probe the incident and has been asked to submit a primary report within 24 hours. Based on the report, further legal action will be taken.”

All the corporators of the electoral panel along with mayor Tilak rushed to the spot in the morning. "The builder is responsible for constructing such a weak boundary wall and should be held responsible for the death of labours. The developers in city construct tall buildings but construct very weak boundary walls and the civic administration turn a blind eye to it," said NCP corporator Nanda Lonkar.

MNS corporator Sainath Babar said that the civic administration was negligent in performing their duties. "The PMC staff only gives permission but thereafter never carry out a site visit to check the work being done by the developer," he said.

Excess excavation at the construction site appears to have caused the incident: Mayor Tilak

She further said that both the developers, who had constructed the boundary wall and the one who had taken new construction, were responsible and action would be taken against them. "The civic staff incharge of construction activities in the area would also face action," said Tilak.

The Pune Municipal Corporation (PMC) has issued a stop work order for the ongoing construction where 15 labourers were killed due to the collapse of a boundary wall.

Mayor Mukta Tilak confirmed the 'stop work notice' issued to the ongoing construction site and also assured that action will be taken against all those responsible. "The incident was unfortunate and action would be taken against all those responsible for it. Prima facie it seems there was excess excavation done at the construction site alongside the compound wall. The municipal commissioner and district collector has been asked to provide all necessary help to the kin of deceased and injured labours," she said.

At least 15 people including four children were killed after a compound wall of a construction site collapsed on temporary houses built at Kondhwa area in Pune on Saturday.

According to police, the incident took place near Talab Masjid in Kondhwa, where tin huts were built for the labourers working at the construction site. After a spell of heavy rains throughout the day on Friday, at midnight the compound wall collapsed on the huts trapping people who were sleeping in the houses.

Local people called the police and later, district administration, Pune city Fire Brigade and National Disaster Response Force (NDRF) was also called to the spot. Three persons were taken out alive and are being treated at a hospital for multiple serious injuries.