Even traffic wardens, some of whom held a rope across the lane to prevent private vehicles from entering the lane, were unable to stop the zooming lot. 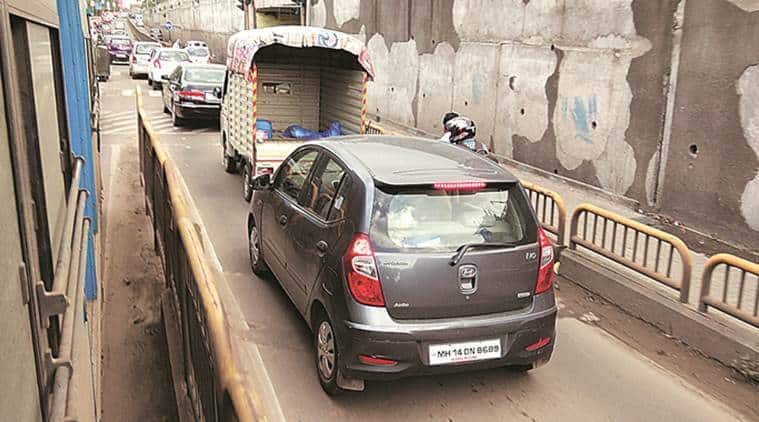 Buses were seen moving out of the BRTS route andplying on the service rad on Tuesday.

On the twelfth consecutive day of its launch, the dedicated lane of Nigdi-Dapodi Bus Rapid Transit System (BRTS), the dedicated lanes were again virtually taken over by private vehicles. Traffic wardens from Pimpri-Chinchwad Municipal Corporation (PCMC) allege that the traffic police department wasn’t providing enough help for the smooth functioning of the BRTS system.

Throughout the route, the scene was common on Tuesday as private vehicles caught in the traffic jam on service roads strayed brazenly into the dedicated lane.

PMPML buses were seen moving out of the BRTS route and plying on the service road. Traffic wardens, some of whom held a rope across the lane to prevent private vehicles from entering the lane, were unable to stop the zooming lot.

In Phugewadi, a traffic warden managed to stop a State Transport bus that had entered the BRTS lane. “There was a delay of nearly 15 minutes as the traffic warden blocked the bus which had entered the BRTS route,” said Vijay Bhojne, head of PCMC’s BRTS department.
Bhojne said that traffic police have not been cooperating with PCMC to ensure seamless movement the BRTS.

Asked whether there was a need to fine those straying into BRTS route, Bhojne said, “Fine would not serve the purpose. But at least the traffic police should help in stopping those enter the dedicated lane. There is also a danger of untoward incident like an accident taking place because of the speeding private vehicles.”

Bhojne said they had put up temporary barricades at Kasarwadi so that they serve as BRTS lane in which buses could move in one direction. “Even those barricades have been removed by the traffic police. One, they are not helping and secondly they are creating impediments in running the service. We had put up the barricades after taking their permission,” he said.

Civic activist Amol Deshpande said BRTS was not being implemented effectively. “It is causing confusion among commuters, drivers and even other motorists who are finding it difficult to sail through the maze of traffic on the service road,” he said. Deshpande said around 6.30 pm on Tuesday, after a minor accident near Atlas Copco, citizens were at each other’s throat leading to high drama right on the busy road. “Also, an ambulance was stuck in the BRTS lane after private vehicles entered the lane,” he said.

Meanwhile, Police Commissioner R K Padmanabhan, when contacted, said he was looking into the problem.