Pune News highlights: The head of 'Baghtoy Rickshaw Wala’ forum who co-ordinated the Chakka Jam agitation, said that Chief Minister Eknath Shinde and Pune Guadian Minister Chandrakant Patil reached out to him and have promised that the committee will “ensure that the bike taxis will go off-road.” 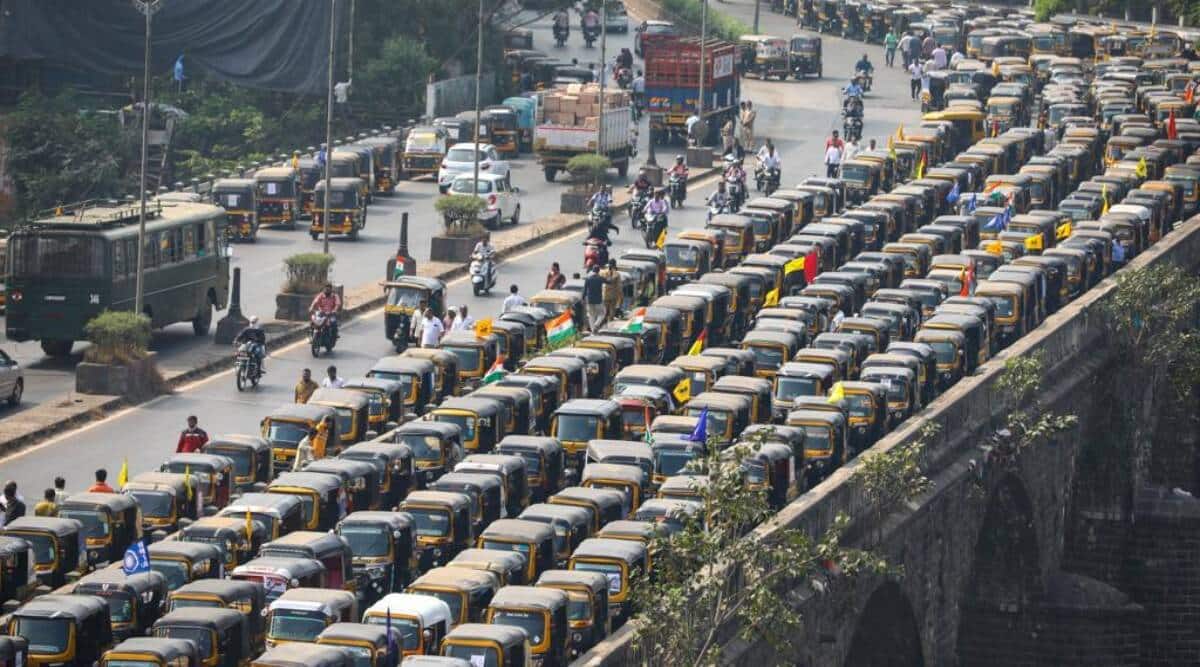 Hundreds of auto rikshaws lined up on Sangam bridge during the Chakkajam protest by 14 auto rikshaw unions against the Rapido bike taxi app at RTO on Monday. (Express photograph by Arul Horizon)

Pune News Highlights:  After remaining off road through the day on Monday, auto-rickshaws will return to roads from Tuesday as unions who had started a ‘Chakka Jam’ strike have withdrawn the strike. The withdrawal  comes after the State Government promised to form a committee that will decide on the bike-taxi issue by December 10.

In other news, the Pune Mahanagar Parivahan Mahamandal Ltd(PMPML) has decided to run buses exclusively for women on 19 routes in the city, as reported by Sakal. The buses will be functional from 28 November and 24 buses will be operating on these routes. Female conductors will be appointed in these buses said Dattatreya Zende, Depot Manager, Kothrud.

Meanwhile, BJP’s Rajya Sabha MP Udayanraje Bhosale on Monday said that those who defame national heroes should be punished with sedition charges as he broke down before media persons while addressing a press conference in the backdrop of alleged objectionable comments recently made against Chhatrapati Shivaji by Governor Bhagat Singh Koshyari and BJP spokesperson Sudhanshu Trivedi.

An array of “missed opportunities” is plaguing the AIDS response worldwide, according to AIDS Society of India president Dr Ishwar Gilada. Factors like lack of accountability, sub-optimal programme effectiveness, and complacency are slowing us down from reaching the goal of an AIDS-free world by 2030, he added.

“We have adequate and efficient tools to end AIDS – be it the science-backed tools and approaches to prevent HIV (human immunodeficiency virus) transmission, or diagnosing and treating persons living with HIV (PLHIV) so that they can live healthy lives. With these tools, we are progressing but not progressing fast enough as we should, to end AIDS by 2030,” he said in a statement issued ahead of World AIDS Day, December 1.

“India has also done well, not only for itself but it has contributed immensely by making antiretroviral therapy (ART) affordable and accessible to over 90 per cent of people living with HIV in the world. However our goals are high and a little too far from being achieved,” Dr Gilada said.

Pune Inc: An ‘electric bull’ that does more than tilling soil, winner of many awards

The number of enquiries that Pune-based startup Krishigati receives every week has convinced the couple who founded it, Sonali and Tukaram Sonawane, that the country has a high demand for their product.

Krishigati has rolled out a machine called the Electric Bull that does what the bull has been doing for farmers — till the soil — but also what it could not, which is precision sowing, seeding, earthing up multiple lanes at a time and spraying to raise farm productivity.

The innovation has won the company several honours, including a runner-up prize in the Pune Chapter of the TiE Women’s global contest. Earlier this month, they emerged winners in the rural category at the National Conference on Social Innovation organised by Pune International Centre. In October, Prime Minister Narendra Modi visited Krishigati’s stall at Agri Startup Conclave and Kisan Sammelan in Delhi. 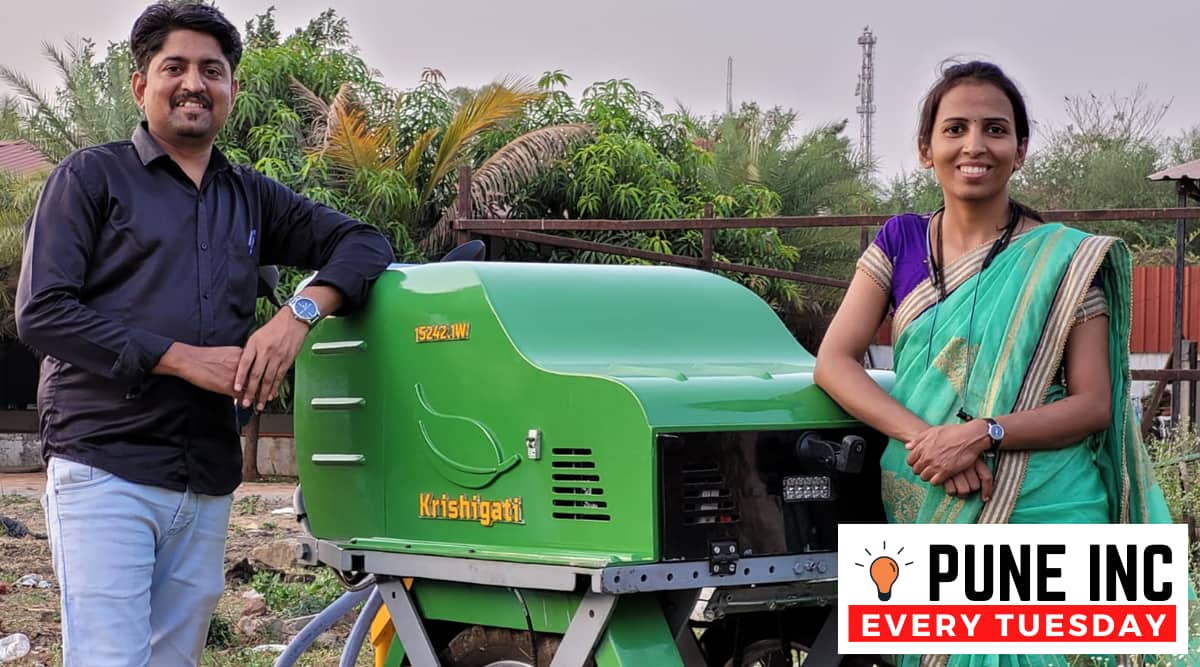 A 34-year-old man allegedly bit a constable injuring him and assaulted three other policemen after being detained Sunday evening in Pimpri-Chinchwad. The police recorded the arrest of the man, identified as Chandrakant Ankush Chavan from Rupinagar in Talawade, who was initially detained for trying to flee after his car hit a bike in the Nigdi area.

As per the information given by Nigdi police station, around 5.20 pm, Chavan’s car hit a bike at Ankush Chowk Ota scheme vegetable market. The bike rider, Swapnil Pawar, sustained minor injuries in the accident. As Chavan tried to flee from the spot, Pawar, along with locals, caught him and called the police. (Read More)

A Pune Mahanagar Parivahan Mahamandal Limited (PMPML) bus was partially gutted after it caught fire near Chandani Chowk area of the city on Monday evening. No casualties were reported in the blaze as the commuters had deboarded the bus in time after the driver reported the fire to them, officials said.

According to the information given by Pune Fire Brigade, the blaze started around 7.30 pm on a PMPML bus running on CNG. The incident took place on Bhugaon Road near Chandani Chowk. After receiving a call at the Fire brigade control room, two fire tenders were deployed to douse the blaze. (Read More)

The Pune City Police has arrested a 42-year-old chartered accountant (CA) for allegedly raping a woman employee of his office after drugging her.

The accused allegedly threatened her to keep mum or he would release a video recording of the act, said police, adding that an FIR was registered against the 42-year-old man on Saturday. The crime took place between March 2019 and October this year, as mentioned in the FIR. (Read More)

AFTER remaining off road through the day on Monday, auto-rickshaws will return to roads from Tuesday as unions who had started a ‘Chakka Jam’ strike have withdrawn the strike. The withdrawal  comes after the State Government promised to form a committee that will decide on the bike-taxi issue by December 10.

Keshav Nana Kshirsagar who heads the ‘Baghtoy Rickshaw Wala’ forum that has co-ordinated the latest agitation, said that Chief Minister Eknath Shinde and Pune Guadian Minister Chandrakant Patil reached out to him and have promised that the committee will “ensure that the bike taxis will go off-road.” (Read More)

A two-year-old girl drowned in a swimming pool at a bungalow in Lonavala Sunday. The police said the girl’s family had come from Dombivli in Mumbai to the hill station in the Pune district for an outing.

As per officials of the Lonavala City police, the incident took place around 9.15 am at a privately owned bungalow located nearly two kilometres from the main Lonavala town. Read More

Even as the Pimpri-Chinchwad Municipal Corporation (PCMC) has claimed to have filled up close to 4,000 potholes, one unrepaired pothole, which claimed the life of an 11-year-old school student, has put the civic administration in the dock. Although the civic administration said they are probing the incident, there is a clamour in the city for stringent action against the ‘guilty’ civic officials who ignored the dangerous pothole.

On Thursday, 11-year-old Atharva Aalane died after he came under the wheels of a truck in the Shahunagar area of Pimpri-Chinchwad. Atharva was heading for his school with his mother on a two-wheeler. His mother, Harshada, was riding the two-wheeler which ran into a pothole. The two-wheeler was first hit by a car. Atharva and his mother fell from the two-wheeler. Atharva fell on the road and was run over by a truck coming from behind. Atharva died on the spot.

Actor Vikram Gokhale’s mortal remains were brought to Bal Gandharva Ranga Mandir from Deenanath Mangeshkar Hospital late afternoon on Saturday so that his friends, relatives and admirers could pay their last respects. Here, members of the theatre and film fraternity paid their final respects to the actor.

Among them was playwright Satish Alekar, who said, “He was only a few years older than me. We were good friends and have worked together on many occasions. He acted with the same seriousness in theatres, arthouse films and run-of-the-mill commercial films. Some may have had a disagreement with his political views, but there is no two opinions about his acting, which was best of the best.” Read more

MHADA to open slots for 4678 houses in December

As reported by Loksatta, Maharashtra Housing and Area Development Authority(MHADA) will open slots for 4678 houses in the first week of December. This is the first time that more than 4500 slots have been made available in Pune. 403 of these slots are under Pradhan Mantri Awas Yojana.

The Pune city traffic Police have announced further changes in the traffic flow for the work on the integrated project to construct a double-storey flyover, grade separators and underpass at the University Square, which sees some of the heaviest traffic volumes in the city.

Devika Ghorpade from Pune claimed the first place in the Women's 52 Kgs at the IBA Youth World Boxing Championships 2022. Devika added a second gold to India’s tally, beating England’s Lauren Mackie in the women’s 52kg final.  With 11 medals, India topped in the ongoing edition of the event, followed by Uzbekistan (10), Ireland (7) and Kazakhstan (7).This year’s championships witnessed participation from close to 600 boxers from 73 countries. India’s eight medals in the women’s section is also the highest for any country.

A proud moment for #Pune. Devika Ghorpade wins the Women's 52 Kgs #Gold at the IBA Youth World Boxing Championships 2022 being held at Spain.

Congratulations Devika, Vishwanath & Vanshaj, on winning gold medals and taking #India to the top of the medals tally. pic.twitter.com/73CKgURnfK

After a forced hiatus of two years due to the Covid-19 pandemic, the Deccan Literature Festival is back with its third edition in Pune from November 26 to 27 at Balgandharv Rang Mandir.

Thousands of Punekar runners participated in the  Bajaj Allianz Pune Half Marathon organized by Sakal Media Group today. Deepak Rawat bagged the first prize in the 21 km marathon, as reported by Sakal.

On a Saturday closest to the new moon day every month, a group of people gets together a few kilometres outside Pune and holds a star party. There’s stargazing, astro games, slideshows and telescopic viewing of objects in the sky, such as the moon, planets, nebulae and galaxies. “Nobody sleeps from sunset to sunrise,” says Deepak Joshi, vice-president of Jyotirvidya Parisanstha (JVP), the Pune-based oldest club of amateur astronomers in India. JVP started on August 22, 1944, when World War II was raging, and its history is linked to preserving the Indian science of timekeeping that is thousands of years old.

Pune has recorded the highest increase in real estate prices between the months of July and September, says a report by real estate consultancy firm PropTiger. At 7 per cent, this was the highest such growth noted among the seven cities viz Delhi- NCR, Mumbai, Ahmedabad, Chennai, Hyderabad, Kolkata and Bengaluru. The price increase, the report said, was mainly due to the increase in raw material prices like steel, cement etc.