Pune: Eleven injured; hoarding was being removed as a precaution in case it fell 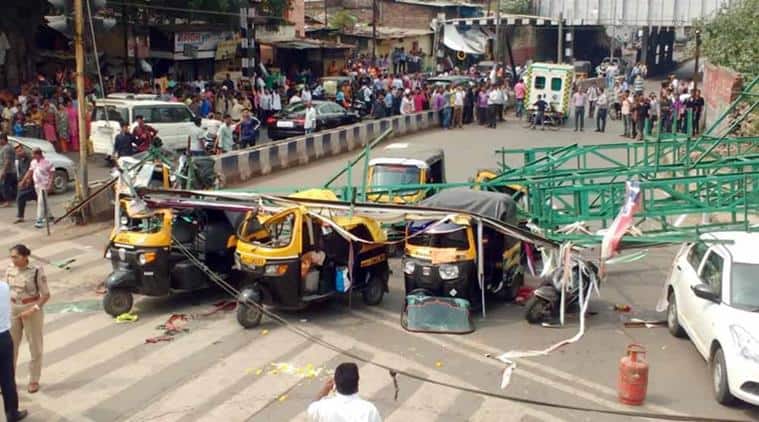 The massive hoarding, owned by the Railways and installed in Railway premises, collapsed on commuters on a street which witnesses heavy traffic throughout the day (Express Photo)

Four persons were killed and eleven injured when a heavy “oversized” and “illegal” hoarding fell on a busy road, even as workers were trying to remove it to avoid this kind of an accident. The massive hoarding, owned by the Railways and installed in Railway premises, collapsed on commuters on a street which witnesses heavy traffic throughout the day. Eyewitnesses said at least six auto-rickshaws, two two-wheelers and one car came under the hoarding.

“I was rushing to the mosque for Friday prayers when I heard a tremendous thud right behind me,” said Imran Shaikh, who stays about 70 metres from the location of the hoardings. “I rushed to the spot and saw that the enormous grill structure had fallen on vehicles that were crossing the signal. The grills had pierced through two to three rickshaws, injuring those inside. A man on a scooter had received the worst injuries as he had been hit on the head,” he said.

Workers had attached ropes to the hoarding to pull it and make it fall towards the Railway premises as they cut the base on the structure, but were unable to balance the grill.

Six such hoardings were being removed, and four had been dismantled in July.

The Railways did not inform the traffic police or local administration about their intention to bring down the hoarding or the possibility that it could fall on to the road.

Deputy Commissioner of Police (Traffic) Tejaswi Satpute said that they had not received any intimation from Railway authorities about the plans to take down the heavy structure this morning. “I got to know about it only after the accident,” she said. 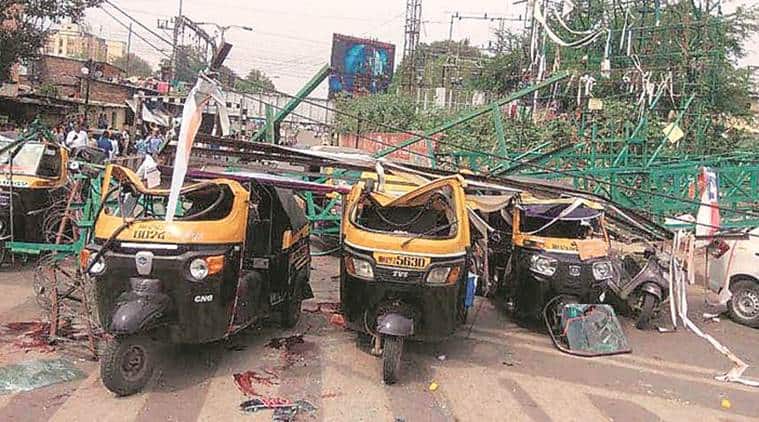 The hoarding fell on six auto-rickshaws, a couple of two-wheelers and one car while it was being dismantled. (Express Photo by Pavan Khengre)

City mayor Mukta Tilak said the size of the hoarding was beyond permissible limits. “Only 20 feet (high) hoardings are allowed in this area. This hoarding was forty feet high,” she said.

The Pune Municipal Corporation claimed that it had sent several reminders to the Railways to uninstall the “illegal” hoardings as they were much bigger than the maximum permitted size. The PMC claimed it had not received any response from the Railways. 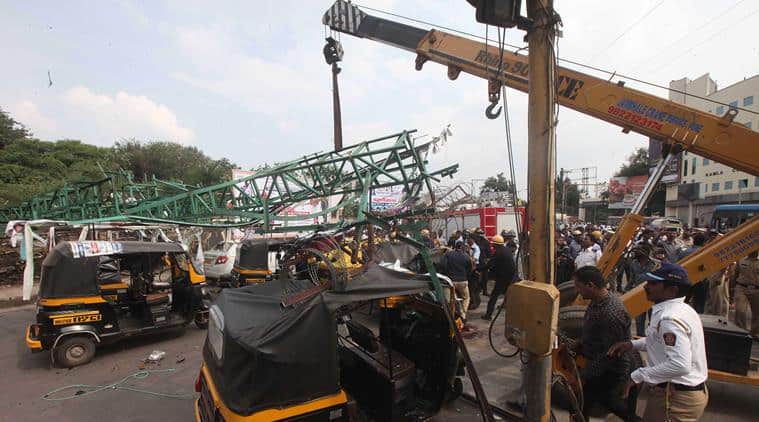 The railways did not inform the traffic police or local administration about their intention to bring down the hoarding or the possibility that it could fall on to the road. (Express Photo by  Pavan Khengre)

He said the hoardings, situated on railway land, used to be lent out to private advertising contractors through tenders for “commercial exploitation”.

Pune city police have lodged an offence of negligence under IPC Section 304 (a) against civil contractor Mallikarjun Malkapure and sub -contractor Jivan Mandhare. Deputy commissioner of police (zone II) Bachchan Singh said that an offence has been lodged at the Bundgarden police station.

Meanwhile, Railway announced ex gratia assistance of Rs 5 lakh for the relatives of the deceased, Rs 1 lakh to those have received serious injuries and Rs 50,000 for those who sustained minor injuries. Rescue operations were underway following the fall of the hoarding near Shaheer Amar Shiekh Chowk near Juna Bazar in Pune on Friday, (Express Photo By Pavan Khengre)
First published on: 06-10-2018 at 01:36 IST
Next Story