The plant has a capacity to generate energy equivalent to around 1.5 commercial LPG cylinders. 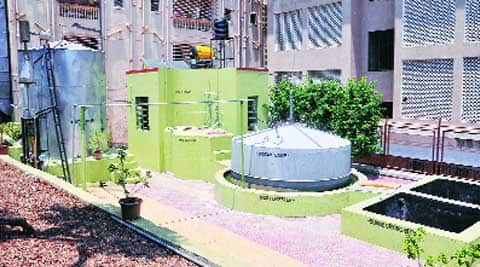 The canteen caters to over 5,000 students daily and generates over 150 kg of solid and semi-solid waste.

In an example worth emulating, the Maharashtra Academy of Engineering and Educational Research (MAEER)’s Maharashtra Institute of Technology (MIT) College, Kothrud, has installed a biogas plant that has a capacity to generate energy equivalent to around 1.5 commercial LPG cylinders by decomposing waste from the students’ canteen.

The canteen caters to more than 5,000 students daily and generates over 150 kg of solid and semi-solid waste that will be processed at the plant.

Installed and commissioned by Thermax Ltd, the biogas plant aims at addressing the issue of disposal of waste from the canteen and other parts of the campus in an eco-friendly manner.

“Disposal of waste has become a major issue in the city. It has emerged as a big challenge before civic body of Pune to dispose thousands of tonnes of waste generated daily. At the MIT campus, the canteen was also a source of large amount of waste. We decided to address the issue through means of renewable energy,” MIT founder-trustee Prakash Joshi told Newsline on Friday.

He said the plant, set up over nearly 1,000 square ft, had a payback period of around three years. “The plant has been installed at a cost of around Rs 14 lakh. From it, we are getting nearly 50 kg of biogas. We are sure of recovering the cost on the plant over the next three years,” said Joshi.

The canteen staff, too, welcomed the move.

“The amount of waste generated in the form of left-over food and remains of vegetables and fruits was huge. It was a tedious task for us to pack the huge amount of waste in polythene bags and hand them over to the civic body almost daily. It is now easy to dump this waste into the biogas plant after some segregation. The fuel we are getting is also clean and efficient,” said
a staffer.

M M Unnikrishnan, managing director and chief executive officer of Thermax, who was present during the commissioning of the biogas plant recently, has appealed to large educational institutes having a sizeable presence of on-campus students to opt for renewable energy methods for a safe and secure environment.

A Raja, Kanimozhi and Dayalu Ammal charged with money laundering