Maharashtra has reported 836 measles cases and 18 deaths this year. The task force has suggested an active search for hotspots and special vaccination campaigns in the state. 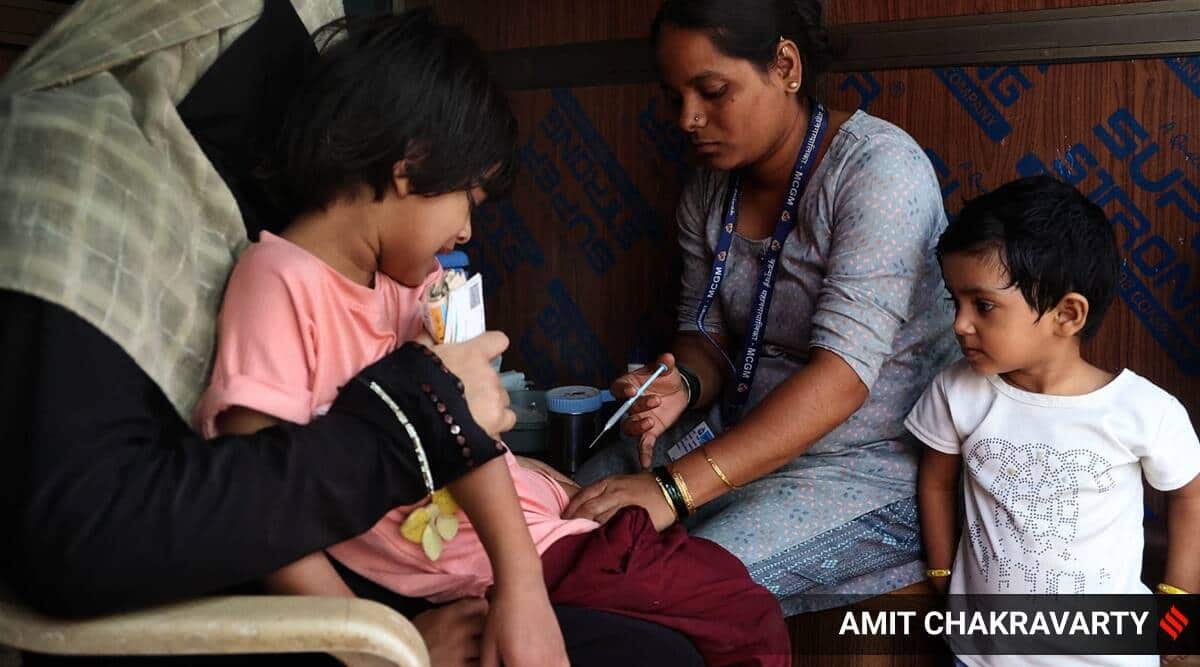 The state taskforce includes 11 members from Pune and Mumbai; instructions have been issued to each district to set up its own expert taskforce. (Representational/File)
Listen to this article
Large-scale vaccination, identifying hotspots: State task force drafts action plan to tackle measles
x
00:00
1x 1.5x 1.8x

A meeting of experts with the Maharashtra state task force on measles prevention and control has resulted in an action plan for a mass-scale vaccination campaign in hotspot areas to tackle the menace. The outbreak of the disease should not be taken lightly, chairperson of the state task force Dr Subhash Salunkhe said.

Maharashtra has reported 836 measles cases and 18 deaths this year. The task force has suggested an active search for hotspots and special vaccination campaigns in the state.

“At the taskforce meeting, we discussed the plan of action that includes community mobilisation and ensuring people staying in slum areas are convinced about measles vaccination. In areas where there is low vaccine acceptance, we are now trying to reach out through leaders and private practitioners. We are also looking to refine standard treatment protocols and share those with paediatricians and practitioners. The focus is on early referral,” Dr Salunkhe told The Indian Express.

“Though a majority of cases were being reported from Mumbai initially, we are now reporting cases from various districts, including Dhule, Jalgaon and Buldhana, and cases are likely to be reported from rural areas too. Ahmedabad (in Gujarat) has reported suspected cases apart from other regions on the borders of Bihar, Jharkhand and Uttar Pradesh,” said Dr Salunkhe, who reiterated the need for Maharashtra to make measles a notifiable disease – a disease that is required by law to be reported to government authorities.

“Measles outbreaks are not unique to Maharashtra alone and other states are reporting suspected measles cases. We will issue a revised standard treatment protocol and undertake measures to mobilise community participation on mass-scale vaccination. This platform should also be used to strengthen routine immunisation,” he added.

The state taskforce includes 11 members from Pune and Mumbai; instructions have been issued to each district to set up its own expert taskforce.

“Unfortunately, the health system capability is not up to the mark. Maharashtra is well known for straightforward reporting and not hiding cases – so, we report ground realities,” Dr Salunkhe said.

In the last three years, the focus on the management and control of Covid negatively impacted the routine immunisation programmes in India, Dr Salunkhe and other experts observed. “The focus on Covid control diverted health systems resources and other national programmes like tuberculosis (TB) elimination and vector-borne disease control,” the taskforce chairperson said.

Elucidating on measles outbreak, Dr Salunkhe said, “Measles outbreaks occur when the percentage of unimmunised children goes up and when it is concentrated in a specified area. Usually, it is seen in migrant populations and in areas where sanitation and standard of living are low. Measles is known for higher mortality in an area where there has been no immunisation for a longer period.”