In name game, charity does not begin at home

Politicians want universities named after social greats, adopt another view in naming their own 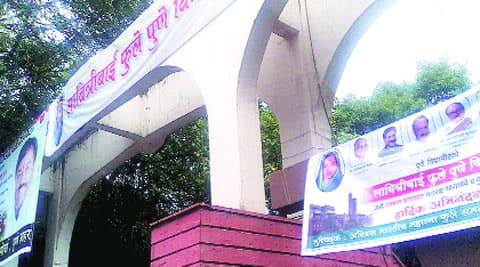 Banners of political parties claim credit for renaming of the university.

Following the move to rename University of Pune after social reformer Savitribai Phule, there is a proposal to name two other public universities, North Maharashtra University, Jalgaon and the Solapur University after Maratha greats Bahinabai Chaudhari and Ahilyabai Holkar respectively. Several politicians, who have thrown their weight behind such proposals or are maintaining silence, have educational institutions named after them or family members.

State Public Works Department (PWD) Minister Chhagan Bhujbal, who has been vocal about renaming the state universities, is chairman of Mumbai Educational Trust (MET) that runs a vast network of educational institutes under the ‘Bhujbal Knowledge Centre’ in Mumbai and Nashik.

Another example is of Dr D Y Patil Deemed University and other D Y Patil institutes, whose patron is veteran leader D Y Patil, who is Governor of Bihar. His son Satej Patil is Minister of State in the Maharashtra government.

These institutes have campuses in Pimpri-Chinchwad and Mumbai, offering a range of professional and other courses.

Among other notable examples, NCP supremo Sharad Pawar has been considered the backbone of Vidya Pratishthan, a group that runs several educational institutes in his hometown Baramati. Pawar Public Charitable Trust, whose managing trustee is MP and Pawar’s daughter Supriya Sule, runs schools named after Pawar, with branches in Pune and Mumbai.

Forest and Rehabilitation Minister Patangrao Kadam, considered a pioneer for starting educational ventures, has been running institutions under the banner of ‘Bharati Vidyapeeth’.

Speaking to Newsline, civic activist Vishwambhar Choudhari questioned “double standards” of politicians pushing for renaming of state universities. “The politicians-cum-educational barons should rename their institutes after social reformers and national icons. Charity should begin at home,” he said.

Choudhari said state universities are being used as soft targets for playing the ‘caste card’. “The renaming of University of Pune and announcement of name-change of two others state universities can be seen as a political move ahead of Assembly elections. Such moves are not going to improve standard of higher education,” he added.

Hari Narke, professor and head of Mahatma Phule Chair at UoP said politicians cannot be compelled to name institutes after social reformers. NCP spokesperson Ankush Kakde said a line has to be drawn between discretion of private educational institutes and state-owned universities.