Grown extensively in the Konkan region of the state, Hapus is a prized export commodity from Maharashtra with the Middle East, European Union countries and the USA being its major destinations. 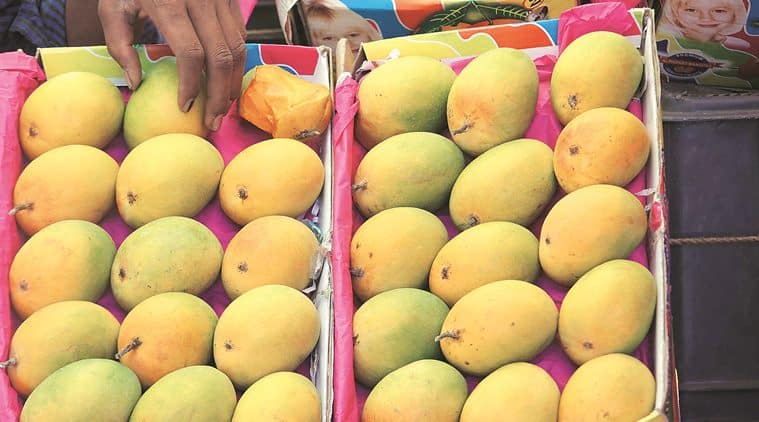 Reports from both Konkan and Karnataka have talked of a bumper crop this year. (Express)

This year, Ratnagirir Hapus (Alphonso mango) can conquer new shores with the state marketing officers eyeing the South Korean and Malaysian markets. Senior officers of the Maharashtra Agricultural Marketing Board (MSAMB) said talks are on to carry out the modalities necessary to facilitate exports of the fruit to these two countries once the season starts.

Grown extensively in the Konkan region of the state, Hapus is a prized export commodity from the state. Middle East, European Union countries and the USA are a major destination for Indian mangoes, with each country having its own export modality. The MSAMB runs irradiation as well as hot water treatment plants to facilitate exports of mangoes from the state.

Officials of the MSAMB said talks are on to work out the formalities necessary for the export of mangoes to Malaysia and South Korea. While Malaysia requires irradiation treatment, South Korean mandates vapour heat treatment of mangoes for exports. Phytosanitary inspectors of both countries are expected to come to India once the mango season starts post-March.

Last year, the Indian mangoes had reached Australia and Japan other than its traditional markets. Last fiscal, 49,180.46 tonnes of mangoes were exported from India, which was a dip of 13.82 per cent from the export figures of 2016-17. Unseasonal rain had wreaked havoc during the crucial flowering stage, which had reduced the crop by almost 25-30 per cent. Domestic prices were also high in view of the paucity of the fruit. This year exporters are hoping for a good season with a 10-15 per cent increase in exports.

Meanwhile, reports from both Konkan and Karnataka have talked of a bumper crop in the offing. Flowering in both states have been ample and the absence of untimely squalls or winds have brightened the prospects for the year.

Rohan Ursal, a trader operating out of Pune’s wholesale market, said they expected a bumper crop this year. “The mango season for Pune and other markets normally starts by March and ends by end of June.” This year too the season, Ursal said, will start by then. Farmers in Konkan has reported satisfactory flowering but have kept their fingers crossed about the harvest.

Explained: The new AK-203, and its legendary ancestor the AK-47