Farmers in the districts of Ratnagiri, Sindhudurg and Raigad that are the major mango producing zones are trying to come to terms with the ban. 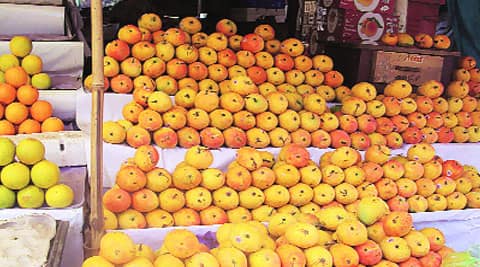 APMCs have seen an increase in the arrival of mangoes.

The ban by the European Union (EU) on import of mangoes from India may well mean a windfall for Puneites. Traders dealing in the commodity say not only will the prices of the prized Alphonso (Hapus) mangoes go down by 40 per cent, but the quality of mangoes hitting the Pune market is also likely to get better in the weeks to come.

A crisis in the mango trade erupted when the EU banned import of Indian mangoes after random tests found fruitflies in 6 per cent of the consignment last year. Though the government authorities claimed to have implemented a new system to treat mangoes, the EU decided to ban the produce for a year.

According to the Agricultural and Processed Food Export Development Authority (APEDA), the quantum of mango export last year was 55,584 metric tonnes worth Rs 26,471 lakh. With the EU doors closed for a year, the product will now have to find other markets, including the domestic ones. The ban is going to hit Maharashtra the most as the state contributes around 90 per cent of the total mangoes exported every year.

The first ripples of the crisis were felt in the wholesale market of Pune and Mumbai where the price of the produce dropped by 20-25 per cent on Tuesday. Ashok Hande, commodity trader from the Vashi Agricultural Produce Market Committee (APMC), said APMCs had seen an increase in the arrival of mangoes for the last one week. “On Monday, more than 3 lakh boxes of mango arrived in the market. With the mercury rising, the fruit has to be sold off soon. Thus, the prices have started plunging,” he added.

Shivlal Bhosale, commission agent from the APMC in Pune, said the arrival of mangoes in Pune had seen a rise and given the ban on exports it would increase further. “The season for Pune had started with a 20-22 per cent hike in the prices as the arrival was slow. However, since Tuesday, the price will start going down. We expect the prices to go down by 40 per cent in the days to come,” he said.

Last year, around 10,000 packs containing five dozen mangoes each had come to the Pune market from Konkan and nearly 25,000 boxes had come from the southern states. The quantum of the trade for Pune was Rs 70 crore. The city has around 7,000 retailers.

However, while Puneites are rejoicing at the prospect of tasting export quality mangoes this year, both commission agents and the growers are grappling with this sudden disruption in their trade. Only 15 per cent of the produce has been exported till now.

Farmers in the districts of Ratnagiri, Sindhudurg and Raigad that are the major mango producing zones are trying to come to terms with the ban.

Advocate Ajit Gogate, president of the Devgad Mango Producers Cooperative, which is the largest such cooperative, pointed out that the fruit was being sold at the rate of Rs 1,200 per five dozen till the export ban. But all of a sudden the price has come down to around Rs 800 per five dozen, with more dip expected in the days to come.

All infrastructure in place but BRTS stretch remains a non-starter