A stationary passenger train engine was set on fire in Ara as protests against the Agnipath scheme in Chhapra, Munger, Bhagalpur, and Nawada were also reported. 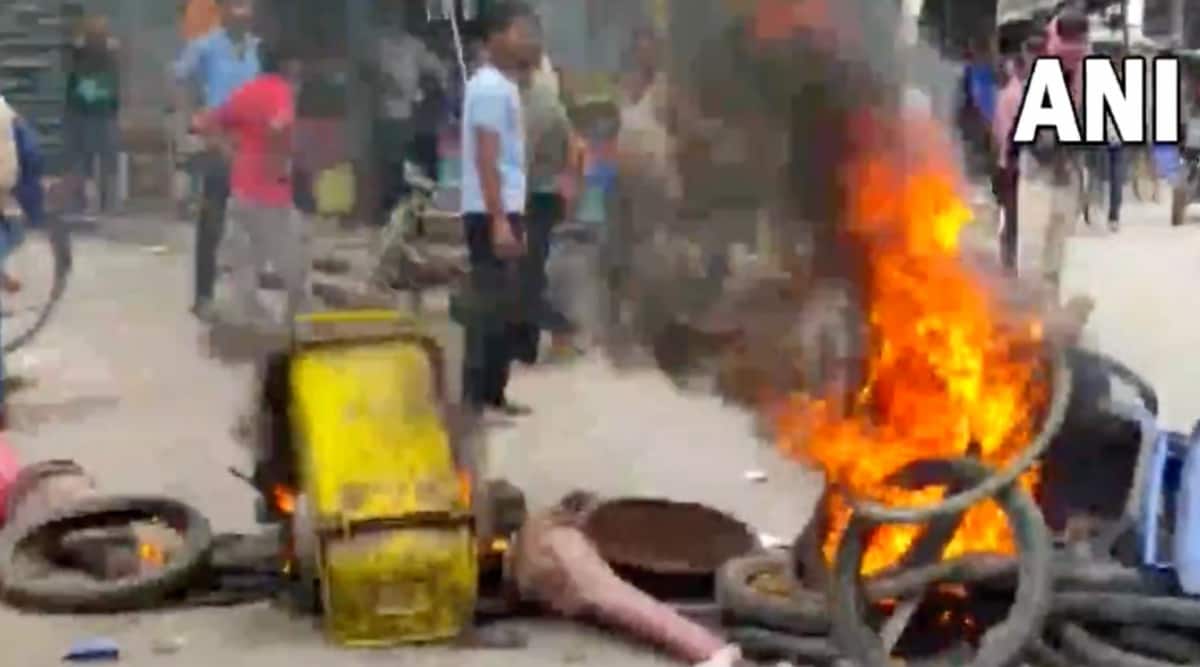 No casualty has been reported from anywhere, according to the police. (Twitter/@ANI)

Aspirants across half a dozen districts in Bihar Thursday blocked rail and road traffic and also vandalised some shops and private establishments to protest against Agnipath, the central government’s new recruitment policy for the defence forces. Protesters have been demanding the reinstatement of the previous recruitment system.

No casualty has been reported from anywhere, according to the police.

“What is this four-year service? People talk of catching us young, they are planning to retire us young,” said Manoj Kumar, a protesting student in Bhagalpur.

The Bhojpur police had to use teargas to disperse students after they torched the engine of a stationary passenger train at the Ara railway station. About half a dozen trains have been delayed because of the protests. Students also uprooted some chairs at the railway platform. They were also seen doing pushups at several protest sites.

#WATCH | Bihar: Youth demonstrate in Chhapra, burn tyres and vandalise a bus in protest against the recently announced #AgnipathRecruitmentScheme pic.twitter.com/Ik0pYK26KY

In Chhapra, protesting students also broke the window panes of a cloth showroom in the main market before the police could chase them. away. Shopkeepers said there had been no police on roads when students had taken to the main market roads.

A senior police officer at Bihar Police headquarters said that about 25,000 personnel have been deployed at railway stations and other places to ensure protesters do not cause rail and road traffic disruptions.

Explained |The Agnipath scheme for recruiting soldiers — what is it, how will it work?

On Tuesday, the government unveiled Agnipath, a “major defence policy reform” for recruitment into the Indian Army, Indian Navy, and Indian Air Force on a short-term contractual basis. The Agnipath scheme is expected to make the permanent force levels leaner in the over 13-lakh strong armed forces.

Most soldiers will leave the service in just four years under the Agnipath scheme. Of the 45,000 to 50,000 recruited annually, only 25 per cent will be allowed to continue for another 15 years under permanent commission.

UPSC Essentials: One word a day- IPC Section 295A