As dengue cases continue to rise in Panchkula, breaking several years' record, city residents speak to The Indian Express, sharing their concerns and highlighting the shortcomings in local governance, administration. 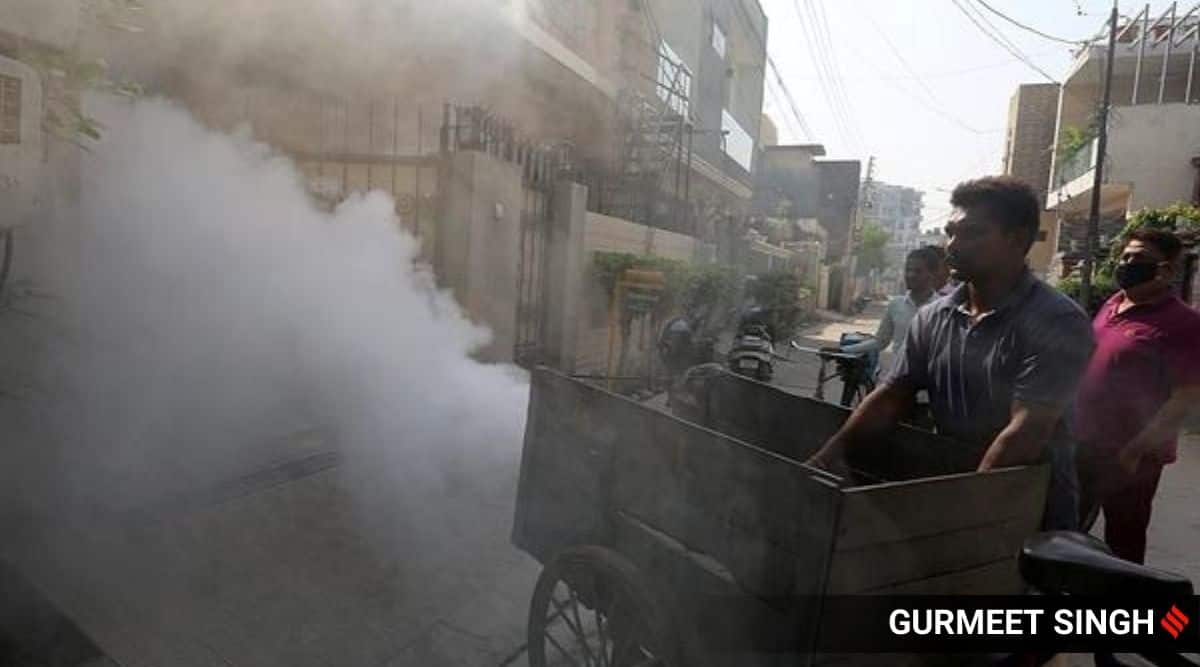 Regular fogging in the humid season should be done but this must not be on demand and for selective areas. (Express Photo by Gurmeet Singh)

Increasing dengue cases in Panchkula is a matter of concern. Earlier, people of the city were afraid of coronavirus, now, malaria, chikungunya and dengue have filled us with worry. The apathy of the municipal corporation as well as the administration is apparent. There is stagnated water everywhere in the city, there is negligible amount of fogging. Dengue is increasing due to all these reasons. We want to tell the mayor and the commissioner of the corporation that fogging should be done every other day in the societies and areas with dirty water. The big bushes in front of gh 105 and 38 should be cut. Water has also accumulated in the 27-acres deposited with the Chiminiya Temple behind the society, besides the area from gh 30 to 38, and it should be cleared quickly.

Despite highlighting situation before the authorities in several meetings, written complaints, social media tweets, they have remained unbothered. Nothing has yielded concrete results. Sector-20 Mango Orchard is one such example, where the residents have raised several complaints about the stagnant water before the Chief Medical Officer, DC, Municipal Corporation and HSVP. This Mango Orchard belongs to HSVP and even after following up several times, no action has been taken. Recently, it was also brought to the notice of the CMO and the same was forwarded to the DC. There is always a conflict because of the multiple authorities, as when the issue was raised with the HSVP, the officials said that the issue came under the authority of the MC. Who is responsible for this outbreak, which is moving towards an epidemic- causing loss of life to many. Reading the daily news about the dengue outbreak in the city feels really sad, as the public is crying out to get palettes match, beds in hospital, dying due to inaccessibility to medical first aid, it is all due to lack of preparedness and no action by the administration. While public is responsibly alarming the authorities, they continue to remain inactive.

At least there are 25 dengue cases in block A ( House Number 1 to 208) Sector 10 of Panchkula. I requested many a times to Panchkula Deputy Commissioner and Health Department to begin house-to-house fogging in block A, but no action has been taken. Fogging is done only in affected houses, however, at least 25 houses on both the sides of the affected houses should be proper fumigation. The authorities don’t have proper coordination with private hospitals too, although most patients are getting treated at private hospitals.

The on-going construction activities in the city, garbage dumps here and there, wild growth on roadsides and in vacant plots have become the breeding ground of mosquitoes. With dengue cases on the rise, the indifferent attitude and callousness of MC authorities has added to the woes of citizens. Unplanned approach of authorities to the issues have make the things from bad to worse.

There is need to of having proactive approach to tackle perpetual problems like solid waste management, pruning of trees and thorough check on construction activities. Regular fogging in the humid season should be done but this must not be on demand and for selective areas, rather it should be done at every nook and corner of the sector.

We have been regularly requesting the MC to make a schedule for fogging in various sectors. But they never bothered to make a schedule. Moreover, fogging is being done selectively at the houses of the supporters of the ruling party. This is an open secret. So many people have also lost their life. Health authority has reportedly directed private hospitals to not disclose deaths due to dengue. This is very unfortunate and shocking. It is clear that the MC is not bothered about the need and safety of the people of Panchkula.

Even the Singh nallah- a major mosquitoes breeding ground that flows through sectors 2,4,12,12A has not been taken care of. Horticulture cuttings from sectors are not lifted for days together, even after sending complaints and reminders. MC officers and even elected members never bother to reply to the letters of people.

World news: 5 overnight developments from around the globe