The premium train from Chhatrapati Shivaji Maharaj Terminus (CSMT), which has fare four times higher than the alternative Konkan-bound trains, has recorded less than 50 per cent occupancy during the off-peak season. 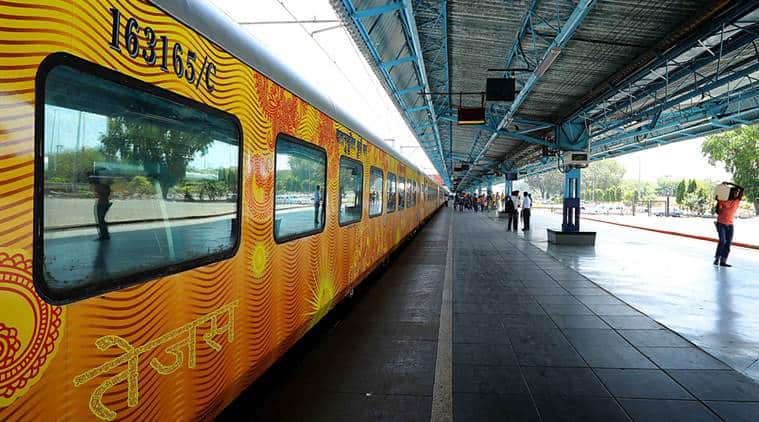 Ways to improve ridership through a change in its timings and more marketing of its features are being worked out. (File)

KONKAN Railway Corporation Limited (KRCL) Chairman and Managing Director Sanjay Gupta said on Monday that the passenger occupancy in the premium Tejas Express train that runs between Mumbai and Karmali in Goa has been low.

Ways to improve ridership through a change in its timings and more marketing of its features are being worked out. Gupta was addressing the media, on Monday, on the commemoration of its 28th year of launch.

The premium train from Chhatrapati Shivaji Maharaj Terminus (CSMT), which has fare four times higher than the alternative Konkan-bound trains, has recorded less than 50 per cent occupancy during the off-peak season. Frequent riders on the train have also complained that the train is frequently delayed and takes longer than the promised nine hours to complete the journey.

“Passenger occupancy on the premium train is an issue. It is a holiday train, a weekend train. We are thus taking efforts to increase its popularity. This includes advertising about changing its timings from CSMT,” Gupta said.

The train, launched with much pomp in 2017, lost steam as passengers complained about higher fares and low speed.

Last week, the Central Railway carried out speed trials of the premium train at 120 kmph, from the existing 110 kmph. Officials said this would cut down the total journey time to 8 or 8.5 hours.

“We are waiting for a report of the trials. Once we have the figures and report, we can comment on the status,” he said. The report is expected to be submitted within a week.

“We are taking all efforts to run trains on time. Each train’s movement is watched closely. There are so many factors which are involved in the running of train and we are closely monitoring its movement 24×7,” he said.

Meanwhile, the doubling of tracks on the Roha-Veer line will be commissioned by December 2019. This will increase the capacity of Mangalore-bound trains from Roha, which currently run on a single track.

The Ministry of Tourism has sanctioned Rs 25 crore to develop Madgaon, Karmali and Thivim stations in Goa.

The railways would use the funds to improve accessibility, parking and amenities at the stations, Gupta added. He also said that the track line would be completely electrified by 2020.

Currently, KR runs about 16,000 passenger trains and 6,000-odd goods trains on its line every year, with passenger ticket earnings making up 55 per cent of its total revenues.