The BMC maintained the sea often throws up the waste thrown into it on the shores during monsoon. 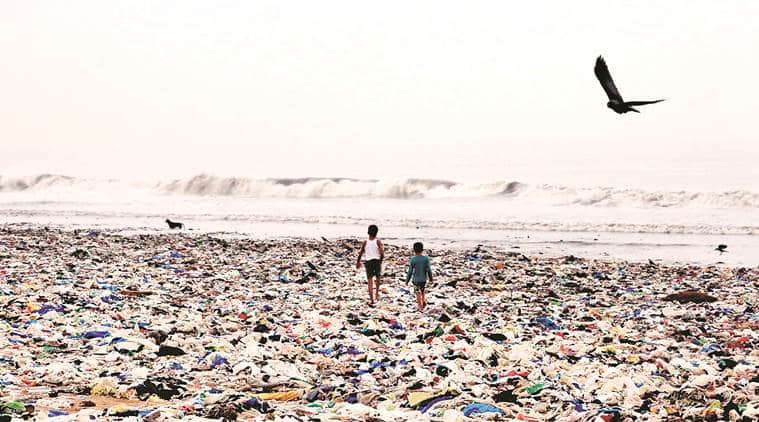 RESIDENTS OF Versova woke up on Wednesday to the sight of the beach being covered in plastic waste. The volunteers, who cleaned the beach, claimed they have collected at least 30 tonnes of garbage in eight hours. The BMC maintained the sea often throws up the waste thrown into it on the shores during monsoon. Assistant Municipal Commissioner Prashant Gaikwad denied that excess garbage was found on the beach on Wednesday.

“We did not notice any abnormal amount of garbage on the beach today. It is the same that we have been collecting every day,” he said. Maintaining that huge amount of waste had washed onto the shore two weeks ago as well, Gaikwad said: “Between June 3 to June 10, a lot of garbage had washed onto the shore. We had collected it into a pile and cleared it today. At least 100 tonnes of waste have been collected in a week.”

Anish Khan, a Versova resident, who volunteered to clean up the beach, said: “In the 21 years that I have lived here, I had never seen so much garbage being washed onto the shore. We gathered around seven to eight persons and collected 30 tonnes of waste in eight hours. There is still some waste left to clear.”

Gaikwad said it is a natural occurrence during monsoon for the sea to wash out more garbage onto the shore. “The intensity and direction of the wind tends to bring with it more waste from the sea. During such days, we deploy more staff to clean the beach. We need at least double the regular number of workers on these days.”

Subscriber Only Stories
View All
Anti-science movement is political but medicine also hasn’t conveyed its ...
In Jharkhand’s tribal villages, an online marketplace for local produce
Delhi Confidential: Mansukh Mandaviya gives a shout out to youngest Mitra
Moscow’s proposal to RBI: Set up Russian financial firm in India, w...
Monthly plan to access Budget
First published on: 21-06-2018 at 02:07 IST
Next Story