Two days after it walked into Sangli market, Bison released into the wild

The male Bison, weighing around 900 kilograms, had strayed into the market yard, surrounded by human settlements running into several kilometres, on Monday. 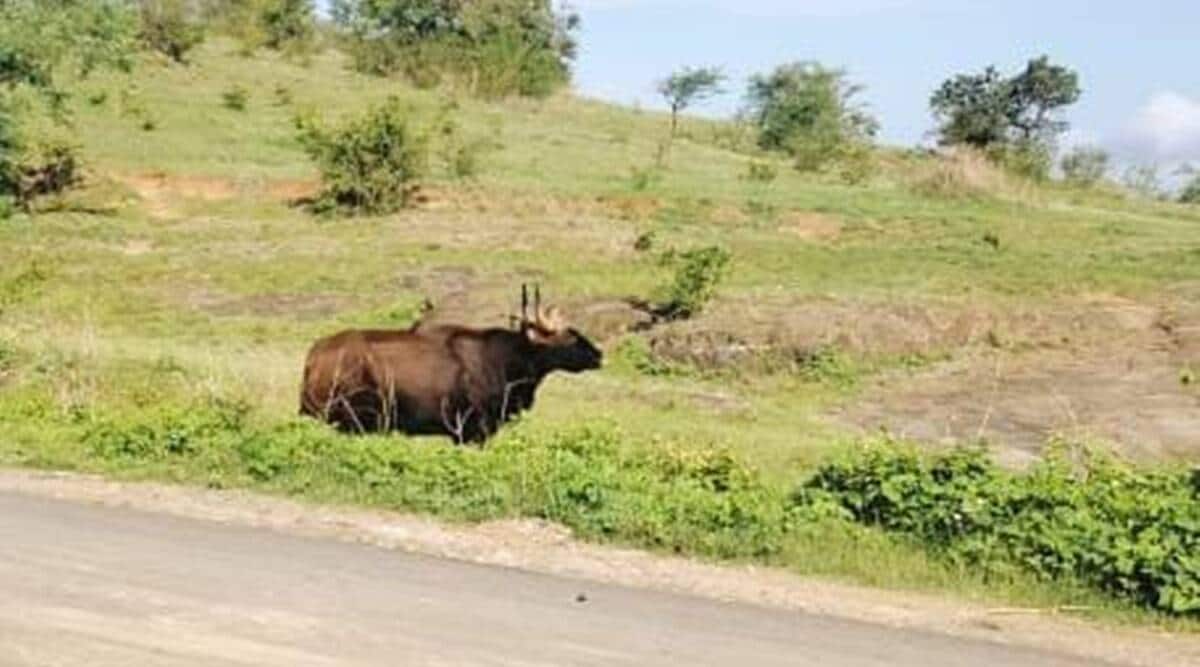 The Sangli Fire Department had managed to block the Gaur into a space that had three exits before the RESQ team from Pune reached the location. (Representative image)

Two days, joint effort by teams from an NGO, forest officials and local administration, and imposition of section 144 to avoid crowding – All this and more is what it took to release an Indian Gaur or Bison, which had wandered into an industrial and market area in Sangli, into the wild on Wednesday morning.

The male Bison, weighing around 900 kilograms, had strayed into the market yard, surrounded by human settlements running into several kilometres, on Monday.

The operation to capture, transport and release the animal back into the wild was a result of joint effort by a team of Pune-based NGO RESQ Wildlife Team, comprising Neha Panchamia and Tuhin Satarkar, Sangli wildlife wardens, district collector, assistant chief conservators of forest (ACF) Ajit Sajane and Abhijeet Dhumal along with the wildlife rescuer community and officials from the local forest and fire department. Officials said the Gaur was visibility agitated as it was resisted by locals in nearby areas where it was roaming in a bid to find an exit.

An official said, “As it is a densely populated area, walking him (the Bison) out of that location was not an option, and neither was chemical immobilisation.”

The Sangli Fire Department had managed to block the Gaur into a space that had three exits before the RESQ team from Pune reached the location.

With chemical immobilisation/tranquillisation, a standard practice employed in capturing animals, ruled out, the Gaur was lured into the transportation truck, which was decked up with fodder, grass and floor padded with sawdust and lined up with dung and urine.

To prevent the gathering of a crowd to view the rescue operation, Sangli district collector imposed Section 144 of the Indian Penal Code in the area. The team at Sangli called in a large truck from Sahyadri Tiger Reserve and JCB machines were put to work to build a ramp for the Bison to walk into the vehicle. In less than a day, the team also prepared the interior of the truck to provide a safe space for the Gaur to walk into.

“The teams carefully distracted the Gaur and finally, at 1:40 am, on Wednesday, the Gaur walked into the container in the truck and the teams shut the doors. To our relief, he started eating the grass inside immediately and seemed quite relaxed. Seeing that the Gaur was in a relaxed state, I ordered his release into Chandoli National Park in the night itself and the teams moved with the animal immediately. At 8:55am on 29th December, the Gaur walked out of the truck,” said Sunil Limaye, Principal Conservator of Forest (Wildlife).

Gaurs are shy animals by nature, known to avoid confrontation and run away from human odour unless provoked. Last year, on December 9, a young Indian Bison had wandered into a quiet bungalow society in Pune city. After running in panic for over 3 km and facing an unruly crowd, the animal was tranquilised with a dart and captured. However, due to poor management and an ill-planned rescue operation, about 10 hours later, it was found dead during transit.

Mainly found in South and Southeast Asia, the Indian Bison has been listed as ‘vulnerable’ since 1986 on the Red List of the International Union for Conservation of Nature. In India, the Gaur is mainly found in the Western Ghats, the forests of central India and forest patches in the Northeast. In Maharashtra, Gaurs are found mainly in the Sahyadri ranges and also in forest areas adjoining Madhya Pradesh. In June this year, a Gaur was sighted near a residential area in Mulshi Taluka in Pune district.

There have been three human deaths in human-Gaur conflicts since 2018 in Maharashtra, two of which took place in 2020. All deaths were reported in forest areas in Kolhapur region, where there is a significant population of the animal.

Bumrah answers Kohli’s SOS with Ball of the Match