Even as flyers had the option to avail RT-PCR facility at the Mumbai airport at their own cost, passengers were not prepared to wait at the airport till the results were out. 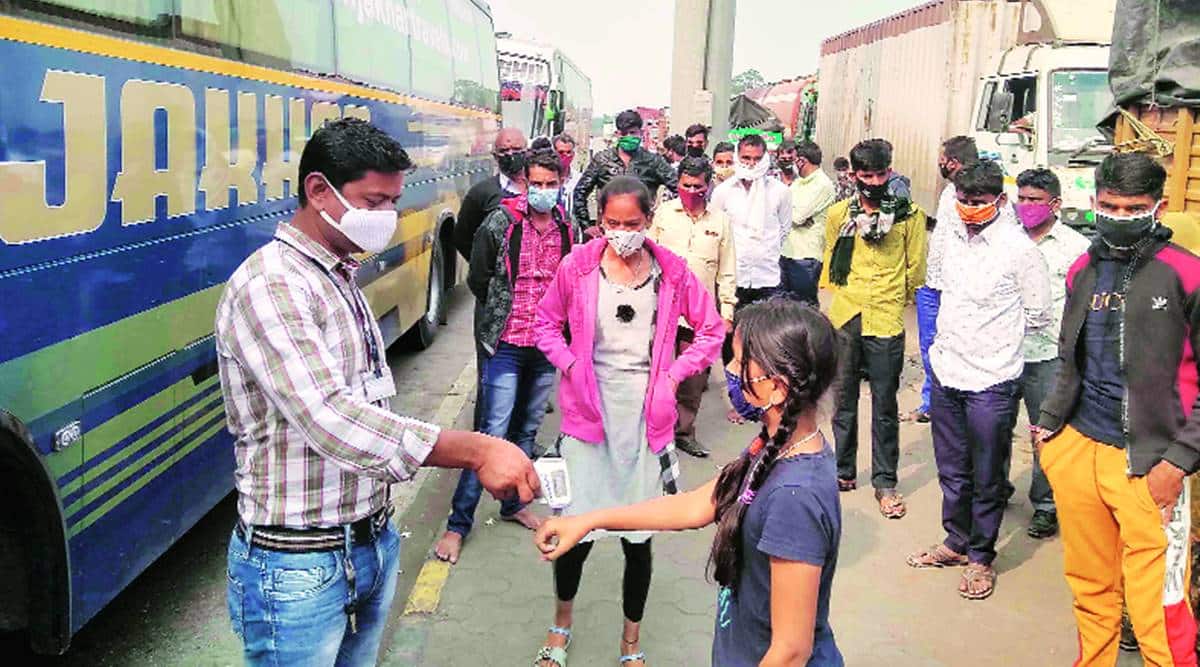 A bus terminus being screened for Covid symptoms on Wednesday. (Photo: Deepak Joshi)

Several flyers and railway passengers arriving in Maharashtra were left hassled on the first day of the implementation of mandatory RT-PCR testing for those entering the state from Goa, Gujarat, Rajasthan and Delhi. Lack of awareness about the recent guidelines issued by the state government and not enough time to test travellers caused massive inconvenience.

Even as flyers had the option to avail RT-PCR facility at the Mumbai airport at their own cost, passengers were not prepared to wait at the airport till the results were out. Meanwhile, 10 railway passengers tested positive for the novel coronavirus.

Sion resident Rajendra Gujral’s sister, who arrived in the city from Delhi on an Air India flight that landed at 12.40 pm, was able to leave the airport at 5.30 pm. “I waited for my sister for five hours. Inside, a fight broke out between passengers and airport officials over mandatory testing, after which passengers were allowed to leave without reports. Air India did not alert passengers about the state government’s new rules. They should have got passengers tested from Delhi before the flight took off,” he said.

Speaking of facilities at the airport, a spokesperson said, “CSMIA already had a well-established structure in place for RT-PCR testing. The airport can test up to 3,000 to 5,000 passengers at any given day, which can be extended further.”

Test results at the airport are provided in approximately eight hours by a state-approved partner, with prices starting at Rs 1,400. Airport authorities did not comment on the implementation of the new directives on Wednesday.

A passenger, who arrived in Mumbai with 12 friends from Goa on Wednesday, said they got provisional letters from Goa Government Medical College stating that they had no symptoms and their oxygen levels were adequate. He told The Indian Express, on condition of anonymity, “We’re from Surat, and were in Goa when these directives came out. Goa Government Medical College had only one staff member to conduct tests, and the results would take at least 72 hours. Since we had a flight to catch for Mumbai, they gave us these letters.”

Some passengers who arrived in the city pointed out that there was confusion over the date of implementation of the new guidelines. “It was not clear if the directives would come into force from midnight of November 24 or 25. Moreover, those who already had their tickets booked couldn’t have possibly been tested in their state of origin,” a passenger said.

For those coming through the railways, an additional support staff of five to six security guards were deployed at all railway stations to monitor passengers coming from the four states, maintaining queues and guiding them for testing as required, apart from the railway police force, said BMC deputy security officer Ajit Tawade.

The BMC screened 9,779 passengers across six railway stations in the city. Symptomatic passengers were tested using rapid antigen kits. Of those, 10 were found to be positive for the virus.

According to the state government circular, travellers coming from Delhi-NCR, Rajasthan, Gujarat and Goa, without RT-PCR Covid negative test reports, will be screened and those showing symptoms will be tested using rapid antigen kits.

Out of the total number of screened passengers, 3,400 arrived at Mumbai Central and 2,047 at Bandra Terminus. Out of the 10 positive cases, five were screened at Bandra Terminus. All the positive patients are Mumbai residents and are in home isolation, said civic officials. Records of all such symptomatic cases will be maintained by respective ward offices.

Doctor who ‘saw death and returned’, to serve at Covid-19 ICU