Pawar: Karnataka CM responsible for consequences if attacks do not stop

"If the attacks on vehicles do not stop in the next 24 hours, the Karnataka chief minister will be responsible for the situation,’’ Pawar said while addressing a press conference hours after trucks from Maharashtra were attacked in Belagavi. 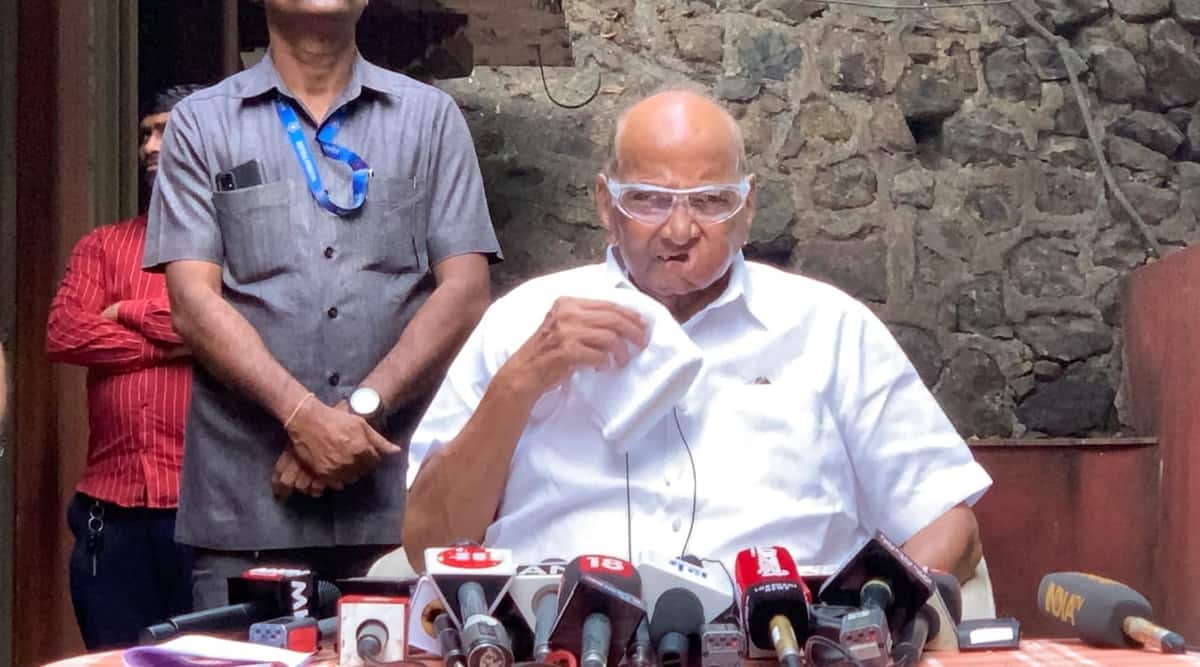 NCP chief Sharad Pawar on Tuesday warned that Karnataka Chief Minister Basavaraj Bommai will be responsible for the consequences if attacks on vehicles from Maharashtra in the neighbouring state don’t stop within 24 hours.

“If the attacks on vehicles do not stop in the next 24 hours, the Karnataka chief minister will be responsible for the situation,’’ Pawar said while addressing a press conference hours after trucks from Maharashtra were attacked in Belagavi.

Read in Explained |Maharashtra-Karnataka border dispute in court, Belagavi on edge: All you need to know

Pawar urged Bommai to ensure that attacks on vehicles and harassment of Marathi-speaking population in the border areas stop immediately. “If the injustice against Marathi-speaking people does not stop in the next 48 hours, I will also have to go to Belgaum (Belagavi) to support them, enhance their morale and boost their confidence,’’ he said.

The NCP chief also said that MPs from Maharashtra should meet Union Home Minister Amit Shah on the sidelines of the Winter Session of Parliament, which starts on Wednesday, to apprise him of the situation. “Maharashtra has always shown restraint. But restraint also has its limits. If the situation is not brought under control, I will go to Belgaum,” he said.

Asking chief ministers of both Maharashtra and Karnataka to come together and find a way through talks, Pawar said the Centre also needs to take a stand on the issue.

The Opposition’s angry reactions come after activists of ‘Kannada Rakshana Vedika Sangathan’ pelted trucks from Maharashtra with stones at the Belagavi-Hirebagewadi toll booth. In the wake of the incident, Deputy Chief Minister Devendra Fadnavis held a telephonic conversation with Bommai.

The NCP chief on Tuesday blamed Bommai for the escalation of the situation. “Some people say that the controversy is being raised due to upcoming elections in Karnataka,” he said.

Meanwhile, Shiv Sena (Uddhav Balasaheb Thackeray) MP and party spokesperson Sanjay Raut hit out at Maharashtra Chief Minister Eknath Shinde for being silent on the issue. “This is the weakest and most helpless government we have ever had in the state. What is the government doing? Where is the CM? Our public property is being vandalised in Karnataka and where is the CM hiding? Belagavi and Karwar are part of Maharashtra and we will always fight for them,” he said.

The Shiv Sena (UBT) also took an aggressive stand and its members visited Belagavi to protest.

In Pune, protesters vandalised buses of Karnataka government by throwing ink and blackening the nameplates. They wrote ‘Jai Maharashtra’ on the buses and demanded strict action.

Kolhapur district president of Shiv Sena (UBT), Sanjay Pawar, who participated in the agitation, blamed two Maharashtra ministers, Chandrakant Patil of BJP and Shambhuraj Desai of Balasahebanchi Shiv Sena, for the incident. “The government should ensure that vehicles from Maharashtra are protected, otherwise I warn Karnataka that there will be repercussions… thousands and lakhs of Karnataka vehicles will be vandalised in Maharashtra,” warned Pawar.

Leader of Opposition Ajit Pawar, in a statement, said that Maharashtra will not tolerate the “high-handedness” of Karnataka.

“The two ministers who were supposed to go there should declare their new dates of going to Karnataka instead of giving excuses. The state must take a firm stand and give befitting reply to Karnataka,” he said.