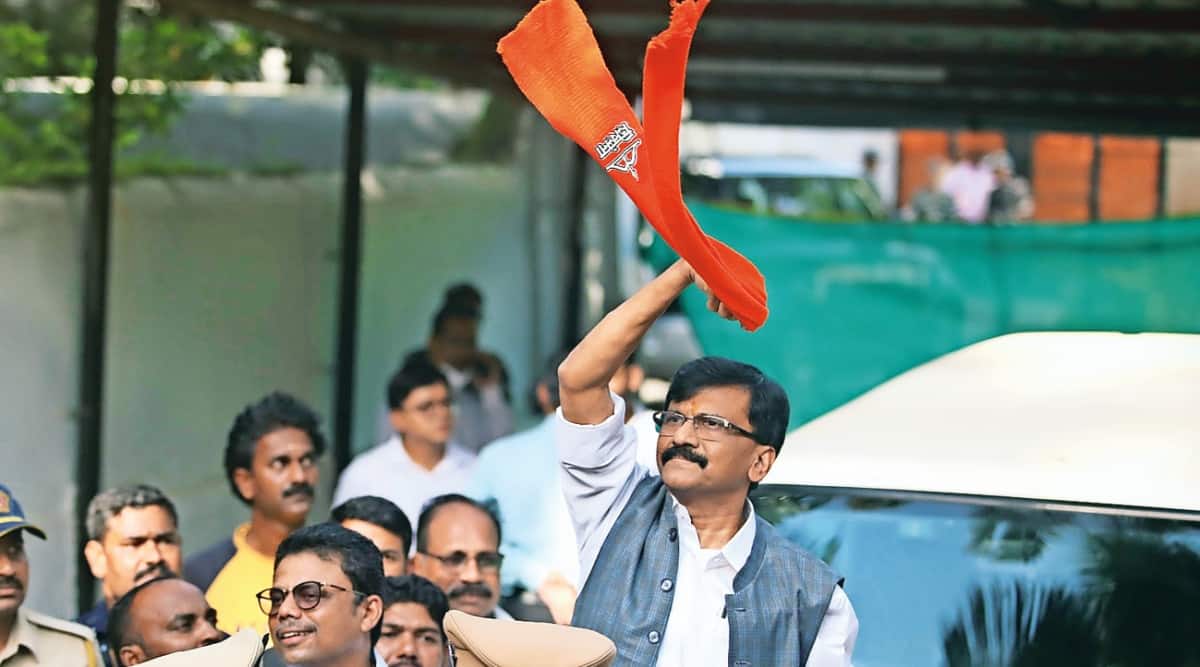 Shiv Sena leader Sanjay Raut after being detained by the Enforcement Directorate in Mumbai. (Express photo by Narendra Vaskar)

The Enforcement Directorate (ED) arrested Shiv Sena leader Sanjay Raut late on Sunday night. He will be produced before a court at 11.30 am on Monday, where the agency will seek his custody.

The ED conducted a search for over nine hours at Raut’s Bhandup residence on Sunday, and then detained him for questioning in connection with a case of alleged money laundering linked to the redevelopment of a chawl project in a northern suburb of Mumbai.

Explained |What is Mumbai’s Patra Chawl case, in which the ED has detained Shiv Sena leader Sanjay Raut?

The ED had questioned the parliamentarian for over 10 hours on July 1, and had summoned him again on July 20. Raut, who is a member of Rajya Sabha, had not answered the summons citing the ongoing session of Parliament. Raut has said that he is not linked to any of the companies being investigated by the ED, and that he would cooperate with the investigation. (Express photo by Narendra Vaskar)

ED investigators landed up at Raut’s home early on Sunday, and after questioning the members of his household for over nine hours, took the MP to the agency’s office at Ballard Pier at 4.45 pm. A sizeable number of Shiv Sena workers had gathered outside Raut’s residence in support of the leader.

The ED is investigating alleged violations of the Prevention of Money Laundering Act (PMLA), 2002 in a case pertaining to irregularities in the redevelopment of Patra Chawl by Guru Ashish Construction Pvt Ltd, a subsidiary of Housing Development and Infrastructure Ltd (HDIL). The agency had earlier arrested Pravin Raut, a close associate of Sanjay Raut, and attached properties belonging to the Shiv Sena leader’s wife, Varsha Raut.

Guru Ashish Construction had signed a tripartite agreement with the Maharashtra Housing and Area Development Authority (MHADA), undertaking to provide flats to 672 tenants of Patra Chawl, develop flats for MHADA, and sell the remaining area to private developers. 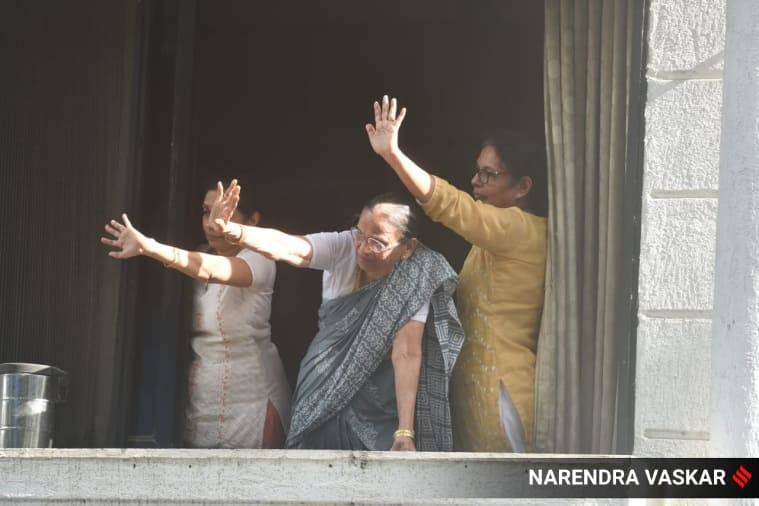 Sanjay Raut’s relatives watch from a window as he leaves for ED office. (Express photo by Narendra Vaskar)

However, the ED claims, Pravin Raut and the other directors of Guru Ashish Constructions misled MHADA and sold the floor space index (FSI) to nine private developers, collecting Rs 901.79 crore, without constructing either the rehab portion for the 672 displaced tenants or the MHADA’s portion.

The agency has claimed that Pravin Raut received Rs 100 crore from HDIL and “diverted” it to various accounts of “his close associates, family member, his business entities” including the family of Sanjay Raut.

Raut has said that he is not linked to any of the companies being investigated by the ED, and that he would cooperate with the investigation. He has also denied all allegations, and alleged that the ED’s action against him is part of a political witch hunt.

“This is a fake investigation. Fake evidence has been gathered against me by threatening and assaulting people. This is part of a conspiracy to weaken Maharashtra and the Shiv Sena. This state and the Sena will never be weakened. Sanjay Raut will never bend and nor will he quit the Shiv Sena,” Raut told reporters while he was being taken away by the ED officials.

Closing in on Sanjay Raut

The case is not new, and has seen movement on and off over the past several years. However, it has been building up towards Sanjay Raut ever since his close aide Pravin Raut was arrested in February, and properties belonging to the Shiv Sena leader’s wife, Varsha Raut, were attached.

“A fake case that has been foisted on me. This is part of an attempt to stifle my voice. They are going to arrest me, and I will be arrested,” he said.

Shiv Sena MLA Sunil Raut, who is the brother of Sanjay Raut and stays in the same house, said the ED officers had a search warrant, and had collected documents that the family had already submitted to the agency. 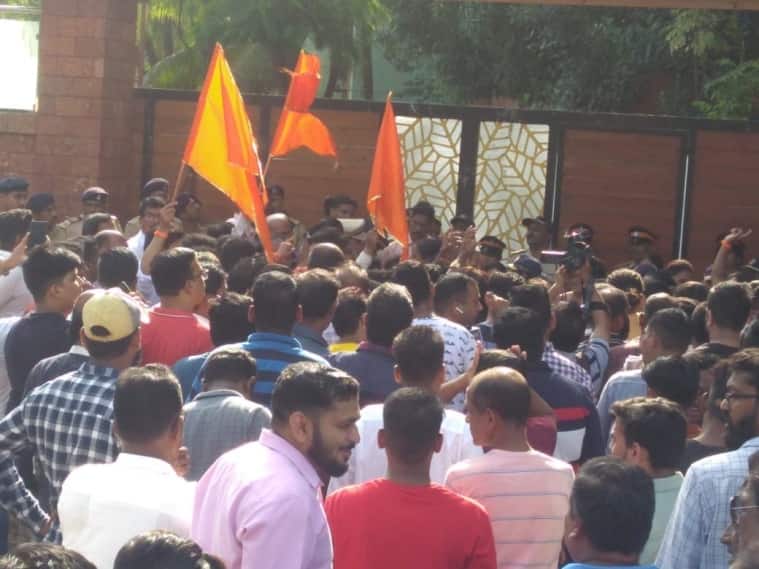 Earlier on Sunday, Shiv Sena president Uddhav Thackeray said that the ED’s action was part of a “conspiracy” to destroy the party. (Express photo)

“They had a search warrant for Maitri bungalow, and checked all three floors. They took documents that we had earlier submitted to the ED, and also collected documents that were earlier submitted to the Income Tax Department, as well as those filed with Sanjay Raut’s election affidavit. They could not get a single document related to Patra Chawl. This is a fake investigation aimed at isolating Shiv Sena chief Uddhav Thackeray,” Sunil Raut said.

Late in the evening, sources in the ED claimed that unaccounted-for cash to the tune of Rs 11.5 lakh had been recovered from Raut’s residence. Separately, Mumbai Police on Sunday registered an FIR against the MP for allegedly intimidating one Swapna Patkar, an ED witness in the Patra Chawl case. The FIR is based on an audio recording of a purported conversation between Raut and Patkar.

A Mumbai Police officer said the FIR was registered under sections 504, 504 and 509 of the Indian Penal Code at the Vakola police station. Patkar has accused Raut of trying to intimidate her.

Earlier on Sunday, Sena president Thackeray said that the ED’s action was part of a “conspiracy” to destroy the party. Thackeray was addressing party leaders and workers from Thane district at his residence Matoshree.

“ED guests are at Sanjay Raut’s house. He may get arrested. What conspiracy is this? Shiv Sena gives strength to Hindus and Marathi people, and hence there is a conspiracy to finish off the party,” he said. Thackeray said people whom the Sena had helped to grow politically, had switched loyalty.

Leader of Opposition in the Maharashtra Legislative Assembly Ajit Pawar wondered why the ED repeatedly wanted to investigate Sanjay Raut. “Many people got notices from the Income Tax, ED, and the CBI. Only Raut will be able to say why the agency (ED) wants to investigate him repeatedly,” Pawar, who is touring flood-affected areas in the state, told reporters.

Congress spokesman Sachin Sawant said the ED search at Raut’s residence presented a “sorry picture” of democracy, and accused the BJP of wanting to “silence” all opposition parties. Nationalist Congress Party (NCP) MP Supriya Sule said the issue would be raised in Parliament.

Chief Minister Eknath Shinde said the ED was doing the work it was mandated to do, and was not acting under political pressure.

“The investigation is underway. If he (Sanjay Raut) hasn’t done anything wrong, why is he scared,” Shinde said, adding, “ED has conducted investigations earlier too. If it is working under the instructions of the central government, then the Supreme Court should take action… The ED is doing its job.”

Shiv Sena rebel MLAs who had earlier criticised Raut and blamed him for pushing Uddhav Thackeray into the hands of the Congress-NCP, said the MP should face the consequences of his actions.

MLA Sanjay Shirsat said, “He (Raut) is not a mass leader. He is just a spokesperson. There is no possibility that Shiv Sainiks will rise up in large numbers in his support because of this (ED’s) action. This country is run by the rule of law. If he has not committed any mistake he will be let off.”