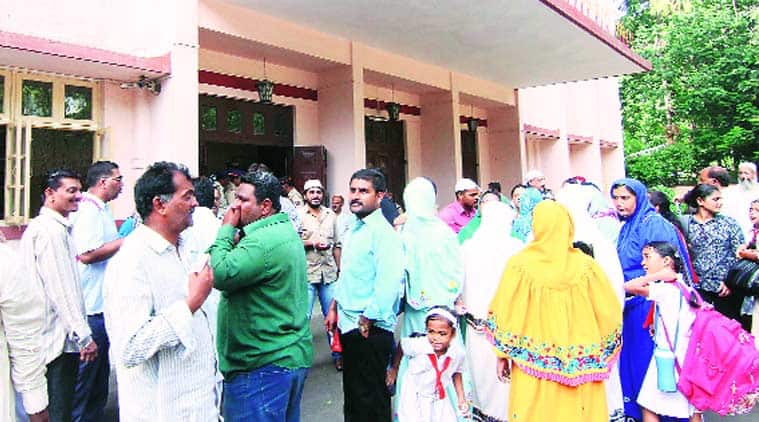 Parents during the protest at St Agnes’ High School in Byculla on Monday. (Source: Express Photo by Amit Chakravarty)

Parents of students studying in St Agnes’ High School at Byculla staged a protest Monday after their wards were made to stand outside the school building for more than seven hours last week. The parents were angry as three of the 40 girl students, most of whom were Bohra Muslims and were fasting for Ramzan, had reportedly fallen sick. According to them, the girls felt exhausted and had to break their fast by drinking water, which angered members of the community.

The school principal admitted that she did not pay attention to the girls standing outside the school building because she was busy, but refused to take responsibility for the breaking of Ramzan fast by the students.

All 40 students studying in Class VII to X made to stand outside the school building from 8.30 am to 3.30 pm were absent the previous day and were supposed to take the principal’s signature on the school calendar to be allowed inside classrooms. However, the parents said, the principal did not meet them and the girls could not enter the classrooms.

“On Wednesday, we had prayers of ‘Lailatul Qadr (holy night)’ and had to stay awake all night. Hence, our children did not go to school on Thursday. On Friday, when they went to school with a leave note, they were not allowed to enter the classroom, and were asked to meet the principal. The principal did not meet them and the girls kept waiting. Three girls felt uneasy and weak and had to break the fast. One of the teachers even told a parent that if we are facing such problems then we must join a Muslim school,” said a parent of one of the three students (she studies in Class X). The girls were initially standing in the corridor outside the principal’s office, but were allegedly asked not to crowd the area and stand outside the school building.

“We even tried to remind the principal that we were waiting outside the school to meet her but were told that the principal was very busy and waiting for her is the only option as we will not be allowed in the classroom till we get her signature on the calendar. We were made to sit on the staircase on Monday,” said a student.

In her statement, principal Sister Louisa D’Mello termed the allegations as “rumours”. She said, “As per the rules of discipline prevalent in the school, all absentees must get their school calendar signed by the principal before entering the class. On Friday, quite a few students were absent and hence they could not be accommodated along the corridor of the principal’s office where absentees usually stand for the signature. Hence they stood outside the school building out of choice.”

The principal said she was busy with the Class XI admissions and was hence unable to pay attention to these girls, adding that her staff too did not inform her about them waiting outside the building. D’Mello added, “Frankly speaking, there is no malice involved in keeping them standing outside. The girls concerned were of different religions and there were even Catholic girls among them. We respect all religions… I do not accept responsibility for breaking of their fast. I do admit that I have not paid attention to the girls’ presence outside the building.”

Even though the school claimed it was not a punishment and that not all the girls were Bohra Muslims, parents and activists belonging to the community barged into the school campus Monday afternoon to lodge their protest. All India Majlis-E-Ittehadul Muslimeen MLA Waris Pathan and former MLA Yusuf Abrahani too visited the school and met the parents. Police had to be called to control the crowd.

Pathan even threatened legal action against the school. “What the school has done is disrespectful to the community. An academic institution like this should not have done something like this. We have demanded a written apology from the school or we will take legal action,” he said.

B B Chavan, Education Inspector of Mumbai South Zone, said his officers would visit the school Tuesday to investigate the matter. “Teachers and principals are not allowed to punish the students in this manner. We have not received any official complaint on this issue, but as soon as I got to know about it I deputed two officers to visit the school on Monday. Principal Louisa D’Mello was not present then and hence our officers had to come back. They will be visiting the school again tomorrow and submit a report following which we will decide our next course of action,” said Chavan.