Panel points out holes in report on trees cut, writes to civic chief

The report, the members said, lacked details such as survival rates of the transplanted trees in every ward, and action taken against developers. 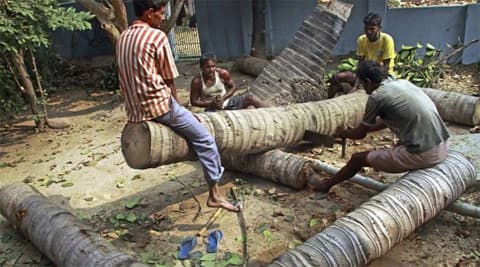 The report, the members said, lacked details such as survival rates of the transplanted trees in every ward, and action taken against developers for not re-planting trees.

Miffed at the lack of details in the report submitted by the civic gardens department on the number of trees cut, transplanted and newly planted from June to December 2013, a member of the Tree Authority has written to municipal commissioner Sitaram Kunte on the loopholes.

According to the report submitted last week, 237 trees in the city were cut after getting approval from the Tree Authority between June and December 2013. Of these, the report said, only 88 were re-planted, while the norm is to plant twice the number of trees cut.

The report, the members said, lacked details such as survival rates of the transplanted trees in every ward, and action taken against developers for not re-planting trees.

Nominated Tree Authority member Kamlesh Shah in his letter said, “The report is not comprehensive and the data submitted by respective zones is simply attached. Members would have appreciated if the superintendent of gardens had provided some data analysis and update on the action taken in non-compliance cases.”

In the report, there is only one instance of a notice being issued to a developer in Andheri (East) for not planting a single tree despite cutting 21 for his project.

The letter states that upon completion of re-plantation and planting of trees, the site should be visited by the junior tree officer, deputy superintendent of gardens along with two members of the Tree Authority, and a deposit of Rs 25,000 per tree should be collected from the developer.

“A report on half-yearly basis on the health of the replanted and transplanted trees should be provided by the developer for a period of five years, and a heavy penalty should be levied for default,” said Shah.

Members of the Tree Authority allege that the report was not even discussed by the municipal commissioner. “The commissioner was instead talking about the High Court’s guidelines defining the working of the Tree Authority. We are going to raise this issue in the next meeting. We need to know who is monitoring the transplanting, and what action has been taken. At present, a junior tree officer checks just once whether the tree has been transplanted,” said Niranjan Shetty, another nominated member.

Man who made hoax calls to Jet Airways acquitted