Café Mommyjoon is a Bandra eatery co-owned by Priya Dutt Roncon. Before its opening last year, Dutt Roncon went through piles of her parents' collection before choosing about 1,500 titles to be kept at the café, which specialises in Middle-Eastern cuisine. 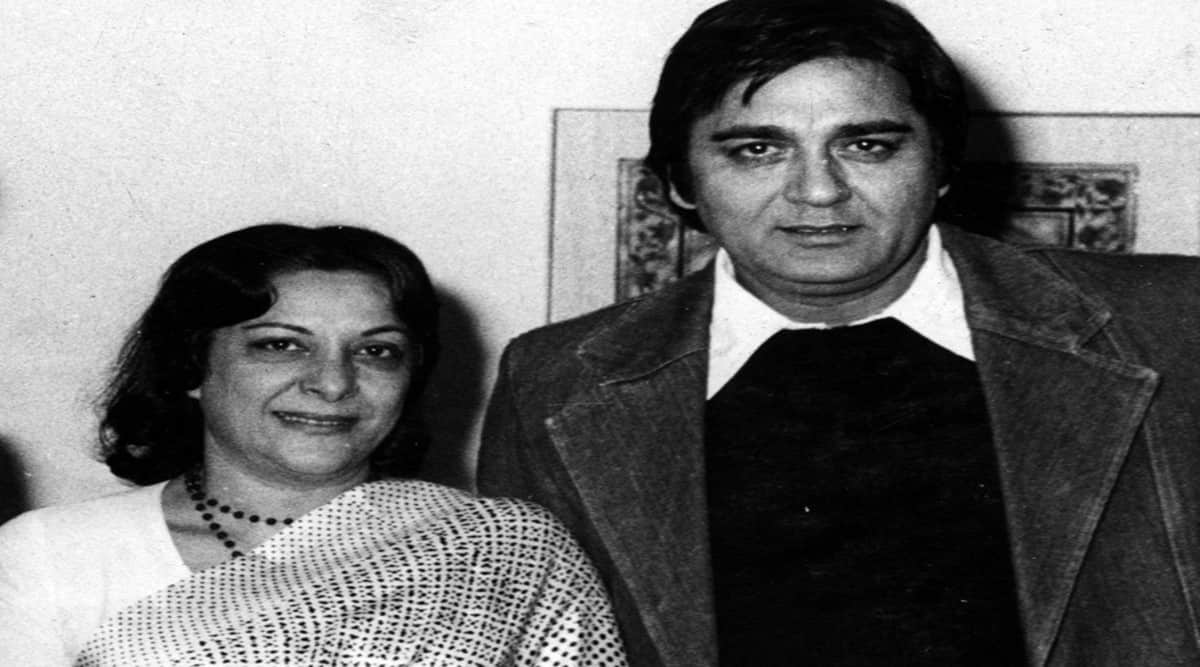 The collection makes a delightful revelation about how passionately Nargis and Sunil Dutt collected a wide range of books over the years. (Express Archive)

IN space-starved Mumbai, it’s rare to find a wall of books in the middle of a restaurant. Rarer still to be able to walk in and browse through exclusive photobooks, coffee-table collections and special editions that once belonged to a Bollywood power couple — Nargis and Sunil Dutt.

Neatly arranged on either side of a wall at Café Mommyjoon, a Bandra eatery co-owned by the late couple’s younger daughter Priya Dutt Roncon, are Sam Shaw’s iconic photobook The Joy of Marilyn: In the Camera Eye, Yousuf Karsh’s Portraits of Greatness, a tome on Edvard Munch’s artwork, among many others — each bearing a small oval-shaped stamp that says ‘Dutts, Nargis-Sunil Library, Bombay’.

The collection makes a delightful revelation about how passionately Nargis and Sunil Dutt collected a wide range of books over the years. “My mother was an avid reader. My father was an avid collector of books. Mom would finish a book in a couple days while dad took longer as he would read very diligently and underline what he liked,” recollects Dutt Roncon, who inherited their rich collection.

Before Café Mommyjoon opened last year, she went through piles of her parents’ collection before choosing about 1,500 titles to be kept at this Bandra café, which specialises in Middle-Eastern cuisine.

These books are kept on both sides of a wall that’s built right in the centre of the café’s indoor space. “In fact, the café is designed keeping in mind the placement of books,” says Dutt Roncon, adding that since she has about 1,000 more titles at home, she plans to rotate the books. “This is an all-day restaurant. We want to encourage visitors to hang out in the afternoons with books and coffee or Irani chai,” she says.

Dutt Roncon says her parents’ deep interest in popular culture and personalities is reflected in their choice of books.

On the cafe’s shelves, apart from the books on Elvis Presley and Marilyn Monroe — the couple are known to be fans of the singer-performers — are a number of titles about personalities from different fields, including The Greatest: My Own Story by Muhammad Ali, The Films of Akira Kurosawa by Donald Richie, Steinbeck: A Life in Letters, Michael Jackson: Dancing the Dream, Luis Bunuel by Ado Kyrou and The Western Films of John Ford.

It is evident from their collection that the Dutts were interested in a wide range of subjects — history, sports, music, food, theatre, arts and photography, among others. There are several fiction titles and thrillers, including Ian Fleming’s James Bond series and James Hadley Chase’s page-turners. “Both my parents were interested in history. Mom was a voracious reader of fiction too. Reading was Mom’s way of educating herself,” says Dutt Roncon about Nargis, who joined the industry as a child actor.

It is, however, apparent from their stock of rare and excellent books related to movies that the Dutt couple keenly followed international cinema and different aspects of filmmaking. There are scripts of several classics such as the Marlon Brando-starrer On the Waterfront, Michelangelo Antonioni’s Blow Up kept alongside The Screenwriter’s Problem Solver by Syd Field, How to Act, Handbook of Film Production, Making Movies: From Script to Screen, Colour in Your Camera and A Cinema of Loneliness. There are several books that trace the history of cinema such as The American Cinema, The Japanese Movie, Italian Cinema, Today, and A Pictorial History of the Silent Screen.

The café has at least two different biographies of Swedish actor Ingrid Bergman along with her autobiography, titled My Story. Were the Dutts a fan of the Casablanca actor? “Yes. Dad thought mom was a lot like Bergman,” recalls Priya with a chuckle. Some other titles about film personalities include The Films of Paul Newman, The Films of Frank Capra, and Bogart by Allen Eyles.

Advertisement
Before Café Mommyjoon opened last year, Priya Dutt Roncon went through piles of her parents’ collection before choosing about 1,500 titles to be kept at this Bandra café.

The café has come up at the same space that used to be the office of Ajanta Arts, Sunil Dutt’s production house that made movies such as Mujhe Jeene Do (1963) and Reshma Aur Shera (1971). Later on, as he turned to politics and joined the Congress, the space served as an office space for him and Dutt Roncon, both of whom were elected to the Lok Sabha.

The Dutt couple picked up books from their favourite haunts. “Earlier, my parents used to buy books from Nalanda bookstore that was in the Taj Mahal Palace (Colaba) Hotel,” says Priya as she recalls accompanying her father to a small bookstore in Bandra.

While reading was encouraged, the Dutts didn’t force their children, says Dutt Roncon. “While we were growing up, the family used to hang out in the library room. My mother bought the collection of Nancy Drew’s books for my sister (Namrata),” she reminisces.

In fresh push to remove abandoned vehicles from streets, MCDs to auction, recycle them