Narayan Rane’s arrest justified, but no need to keep him in custody: Court

Narayan Rane's lawyers opposed his custodial interrogation stating that since the punishment on charges invoked against him is not more than three years, the guidelines laid down by the Supreme Court on arrest in such cases should be followed. 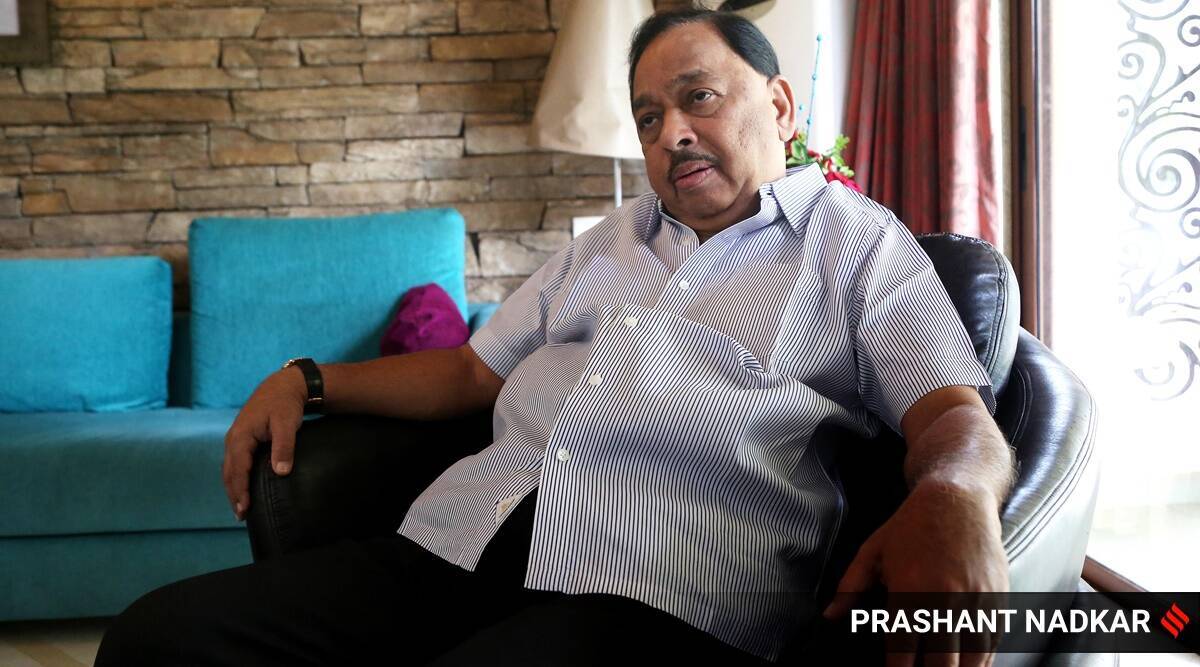 Narayan Rane was produced before the Judicial Magistrate First Class at 9.55 pm on Tuesday. (Express Photo by Prashant Nadkar)

The court which granted bail to Union Minister and BJP Rajya Sabha member Narayan Rane late Tuesday night, said that while his arrest was ‘justified’, there was no need to keep him in custody. Rane was arrested Tuesday by Maharashtra Police for threatening to “slap” Chief Minister Uddhav Thackeray.

Rane was produced before the Judicial Magistrate First Class at 9.55 pm on Tuesday after the Police arrested him when his transit anticipatory bail application was rejected by the Ratnagiri sessions court earlier in the day. Rane had no complaint of ill-treatment by the police when asked by the court. His lawyers opposed his custodial interrogation stating that since the punishment on charges invoked against him is not more than three years, the guidelines laid down by the Supreme Court on arrest in such cases should be followed.

“Admittedly, the accused being a Central Cabinet Minister, police necessarily should have remained along with him. Apart from this, there is the first information report (FIR) against the present accused lodged by one of the members of a political party. Considering reasons of arrest and reasons discussed above, I found that arrest is justified,” the JMFC court said. It, however, added that it was not necessary to send him to police custody. It also pulled up the police for not maintaining the case diary as per procedure. It said that the case diary was ‘two leaves of paper’ and not in volume or with pagination.

“In the present case, whatever statement allegedly made by the accused was made before police and available to the media. The informant himself alleged in the FIR that the accused made a statement before the media and it was viral in social media. Considering the nature of the offence I do not find it necessary to hand him over in police custody,” the court said. It directed Rane to be sent to judicial custody till September 4, following which his lawyers moved a bail plea.

His lawyers argued that he is a 69-year-old man and is ready and willing to cooperate with the probe. The prosecution said that there was an apprehension that the Cabinet Minister may make similar types of statements again “which will create disharmony in the community”. His lawyers said that while they had advised Rane not to make such statements in public at large, he had not conceded to give an undertaking quoting his liberty. The court considered the charges against him and noting that most of them were bailable and two other sections-153 (A) (1) (b) (promoting enmity between different groups) and 505 (2) (statements conducing to public mischief) of the Indian Penal Code had punishment not more than three years, granted him bail.

“Considering the above factors, no prejudice will be caused to prosecution if the accused is released on bail on certain terms and conditions,” the court said. The conditions include that he will not tamper with the probe, cooperate with the investigating officer and appear before the police in Alibaug on August 30 and September 13. It said that if the officer wants to take his voice sample or join the probe, Rane be given seven days prior notice to appear before him. The Nashik police has written to Rane to appear before it on September 2 for questioning to ‘ascertain facts and circumstances’ in the investigation.

Earlier in the day, Rane had approached a court in Ratnagiri for transit anticipatory bail, seeking protection from arrest while he approached a court in Nashik for regular pre-arrest bail. The court had rejected the plea stating that there is no specific provision for grant of anticipatory transit bail and it is only a discretionary relief. It said that Rane could approach the court in Nashik without requiring protection from arrest for the short period of 7-8 hours to travel to the town over 400kms away.

“…unnecessary invocation of such prayer by this sessions court is not proper without considering the nature of actual offence and papers of investigation,” the additional sessions judge in Ratnagiri said.