The city’s AQI in the System of Air Quality and Weather Forecast and Research (SAFAR) dashboard on Monday morning was 301, which is ‘very poor’. Later in the evening, however, the AQI improved to 297, which was three short of ‘very poor’. 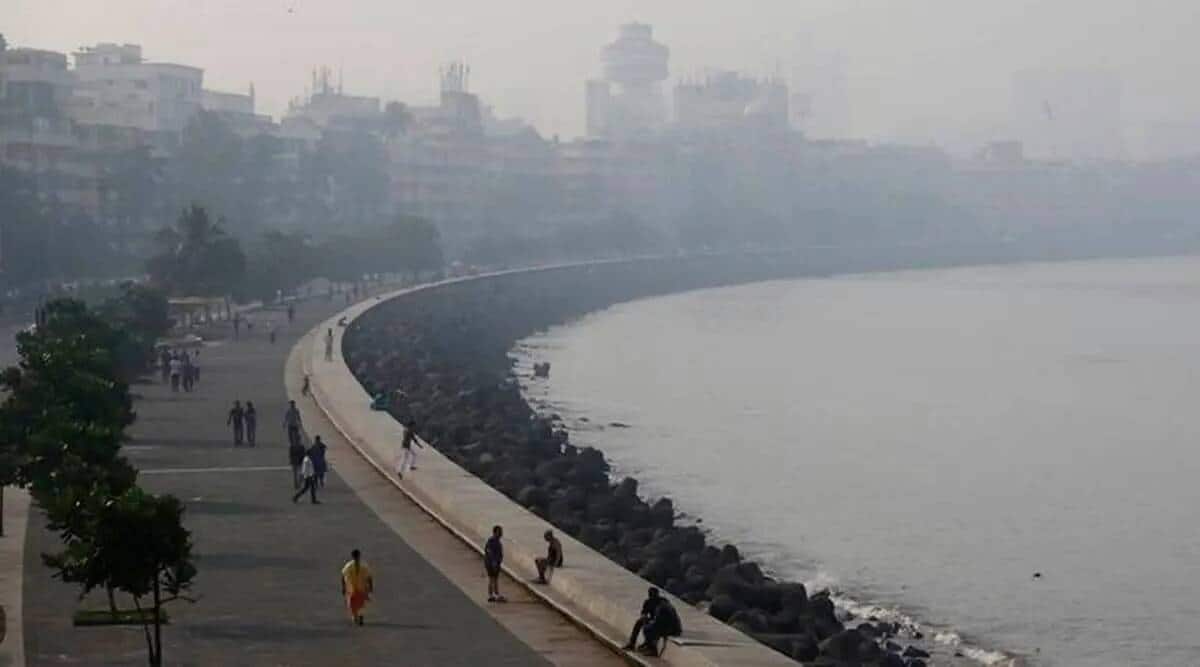 Weather and climate experts said the present air quality in Mumbai is the result of pollutants that have accumulated in its lower atmosphere for the past few days. (File)

Mumbai’s skyline was covered in a blanket of smog on Monday morning as the overall Air Quality Index (AQI) of the city fell to ‘very poor’ category on account of change in weather conditions and slow wind speed.

The city’s AQI in the System of Air Quality and Weather Forecast and Research (SAFAR) dashboard on Monday morning was 301, which is ‘very poor’. Later in the evening, however, the AQI improved to 297, which was three short of ‘very poor’.

Weather and climate experts said the present air quality in Mumbai is the result of pollutants that have accumulated in its lower atmosphere for the past few days.

“Mumbai is experiencing south-easterly winds for the past few days, which is not strong enough to blow away the pollutants in the air. Pollutants are getting accumulated in the air and remaining suspended in the lower atmosphere for longer periods leading to poor AQI,” said Mahesh Palawat, meteorologist and climate expert from Skymet Weather.

“In the morning, these particulate matters and water vapour suspended in the air are combining to form smog, which is affecting visibility. The low wind speed is the primary factor behind poor AQI. Being an island city, Mumbai’s AQI is determined by wind blowing from the sea,” Palawat added.

He said that by the end of this week, the AQI is likely to improve. Meanwhile, the night temperature also showed a significant rise on Monday. The Santacruz observatory of India Meteorological Department (IMD) recorded 23 degrees Celsius, which is 3 degrees above normal.

“By the end of this week, north-easterly winds are likely to blow over Mumbai and this will lead to a fall in temperature and will also improve the air quality. With increase in wind speed, the pollutants will disperse,” Palawat said.

Doctors and health experts advised people from vulnerable groups to use mask while stepping out. They also advised installing air purifiers as a safety measure in pockets with poor AQI.

“High AQI mainly impact children and senior citizens who are co-morbid and may affect their lungs directly. Therefore, it is advisable to use mask while stepping out and avoid going out at peak traffic hours. Post Diwali, the AQI in Mumbai has shown a significant drop, which has also led to an increase in patients coming for treatment for lung diseases,” said pulmonologist Dr Ashutosh Shah.

Meanwhile, former state Environment Minister and Shiv Sena leader Aaditya Thackeray took a jibe at the government in a series of tweets stating that there is lack of seriousness as no directive has been issued from the state government or the civic body for AQI management.

“Air Quality in Mumbai currently is really bad. Visibility is low. Smog is evident. However, the absence of a full time environment minister, lack of seriousness in climate action has made this issue irrelevant to unconstitutional govt. Hope they issue some directives on it. While we see other states proactive measures on air quality, that directly affect health and life, the unconstitutional govt is still keen on hacking trees, disrupting forests and dirty politics. I hope there will be a statement and some measures taken on this issue,” he tweeted.

While Mumbai still has to announce measures for the poor air quality, earlier on December 4 the Delhi government announced a temporary stay on ongoing construction activities owing to poor AQI in the capital.

“The BMC is working closely with IMD and SAFAR in terms of managing the AQI. So far, we have not been notified any warning about severity relating to poor AQI. Our guidelines will be issued only when we receive a notification from the weather department or else if we say anything now, it will only create panic amongst citizens,” said a civic official from the environment department.

Congress, NCP not inclined to accept us in MVA: Prakash Ambedkar