Students said that it was all these activities that made them enjoy school, which they were missing since offline operations began last year. “I did not realise I was missing this until I had fun singing the prayer song along with all my friends in chorus,” shared Priti Kamble, a Class VI student. 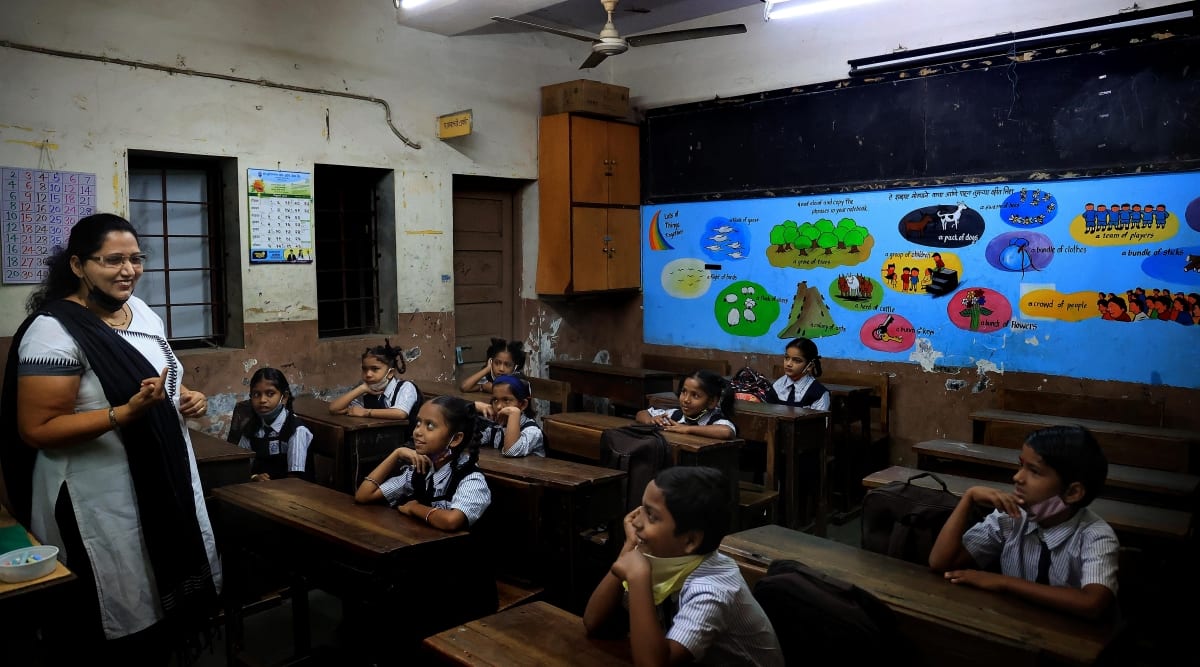 Periodical medical expert tips will also be given to students who may require such intervention. (Representational/File)

RAJLAXMI PRAJAPATI, a Class III student from Ashokwan civic school in Dahisar bit her tongue after realising that she had missed a line in the national pledge during the morning assembly at her school. Whereas Rohan Jain, a Class V student of CNM School in Vileparle, was most excited about being able to play at the school playground with his friends. As schools in the city resumed normalcy from Wednesday, the old hustle-bustle was back with a full day timetable, including recess-break, sports and other activities.

Students said that it was all these activities that made them enjoy school, which they were missing since offline operations began last year. “I did not realise I was missing this until I had fun singing the prayer song along with all my friends in chorus,” shared Priti Kamble, a Class VI student.

Many of them had to take the teacher’s help after forgetting their lines. “It has been almost two years after the schools stopped all these activities, due to the pandemic outbreak in March 2020. We are glad that most children are back to school now. Others, who had migrated, are also going to join from next week as normalcy is resumed,” said Agatha Dias, a teacher at Ashokvan civic school in Dahisar.

At private schools too, the atmosphere was no different. At Orchids The International School, it was ‘no-book-day’ on the first day of normalcy, instead, the focus was on other activities.

Kavita Nagpal, principal of the school, said, “We arranged an array of activity-based learning exercises for our students.”

At CNM School in Vile Parle students enjoyed offline PE classes the most. Kavita Sanghvi, principal of the school said, “Now, students could go to designated places for all those activities such as a playground for PE and sports class, music or instrument room, a library for reading among all. They were more than happy that they could move around.” Jaden, a student of Class VI from this school, said, “The thing I missed the most was the canteen and I now get to go there every day.”

Even after BMC’s go-ahead for schools in the city to resume normal operations from Wednesday, not many opened entirely as they require more time for planning. Most non-state board schools are preparing for the exams. Many state-board schools are focused on beginning with primary sections as secondary staff and premises will be required for the board exams beginning in a few days.

Rajendra Pradhan, Trustee President of the D S High School in Sion, said, “The school will double up as board exam centre and those arrangements must be done keeping Covid-19 protocols in mind. With the requirement of physical distancing, more classrooms will be required. In this case, the decision to begin school in full capacity has to be taken cautiously as anyway after a few weeks it is exam season for all classes.”

For a price, brands set to get space in railway station names