Mumbai Rains: Mumbai has received 1993.9 mm of rainfall, which is 90 per cent of the average rainfall (2,205 mm) on Wednesday. The city usually receives rainfall of this amount during the monsoon every year.

Monsoon is likely to remain “vigorous” over the state, said IMD. (Express Photo by Amit Chakravarty)

Mumbai Rains Live Updates: Maharashtra Chief Minister held an emergency meeting to take stock of the flood situation in the Ratnagiri and Raigad districts. He has directed the Disaster Management units and concerned departments to stay alert and start rescue operations. Prime Minister Narendra Modi also assured all possible help from Centre to mitigate the situation.

IMD has placed Raigad and Ratnagiri on red alert with chances of extremely heavy rain at isolated places on Thursday. Marathwada is very likely to receive widespread rainfall during the next one to two days.

Meanwhile, in Mumbai at least 34 long-distance trains have been cancelled, 26 diverted and 34 short-terminated after the tracks got damaged due to landslides in certain sections.

Assured all possible support from the Centre to mitigate situation in Maharashtra: PM Modi

"Spoke to Maharashtra CM Shri Uddhav Thackeray and discussed the situation in parts of Maharashtra in the wake of heavy rainfall and flooding. Assured all possible support from the Centre to mitigate the situation. Praying for everyone’s safety and well-being," said PM Modi

Spoke to Maharashtra CM Shri Uddhav Thackeray and discussed the situation in parts of Maharashtra in the wake of heavy rainfall and flooding. Assured all possible support from the Centre to mitigate the situation. Praying for everyone’s safety and well-being. @OfficeofUT

With incessant rain filling the Khadakwasla dam to the brink, the release of water in the Mutha river has begun and the Pune Municipal Corporation (PMC) has alerted residents living in low-lying areas close to the river.

“The storage in Khadakwasla dam was 88.52 per cent till 3 pm due to incessant rain for the last two days in the catchment area. The extremely heavy rain continues so 2,466 cusec water is being released in Mutha river and it is likely to be increased as per the situation,” read a press communication of the Irrigation Department. Read more.

In Thane city, the body of Jeevan Owhal (36), who had fallen into a swollen stream on July 17, was found in Vitawa creek, an official said. Several houses, bridged and roads were also damaged in the flooding, leaving people stranded.

Train services in many areas of Maharashtra, including Mumbai and Nashik, have been affected due to water-logging and accumulation of mud. Several passengers were left stranded as restoration works began. 33 trains have been diverted, 51 short terminated and 48 cancelled because of heavy rainfall in Mumbai, the Central Railways said.

Maharashtra | Train services affected in Igatpuri area of Nashik district due to accumulation of mud on the tracks following heavy rainfall. Restoration work is underway. Many passengers are stranded at Igatpuri railway station. pic.twitter.com/1VU1zLtnh0

The rail and road traffic has been severaly hit in several parts of the state, including Mumbai.

Two teams of the National Disaster Response Force (NDRF) have reached Kohlapur for rescue operations amid the heavy flooding and rainfall. One team has been deployed to the Karveer tehsil and another to Shirol.

Maharashtra | Two teams of the National Disaster Response Force (NDRF) have reached Kolhapur for rescue and relief operations, in view of heavy rainfall in the area.

Incessant heavy rains in various parts of Pune district since the early hours of Wednesday have resulted in landslides leading to the closure of roads, localised flooding and damages to paddy crop at some places, Pune district administration and rural police have said. There has been no death reported due to rain-related incidents.

The Indian Meteorological Department (IMD) has issued a red alert for Pune district for tomorrow (July 22). The rain may relent in a couple of days as medium to heavy and sporadic rainfall has been predicted across the district for July 23 and 24 respectively. Read more. 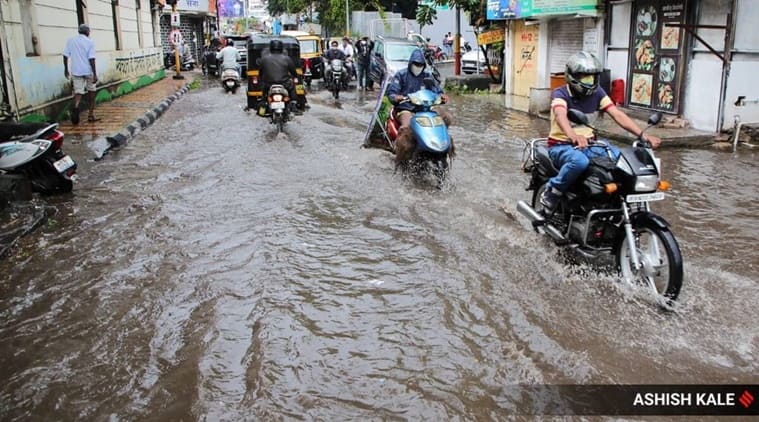 In a review meet of the flood situation in Maharashtra, the chief minister noted that major rivers in Ratnagiri district, including Jagbudi, Vashishti, Kodavali, Shastri, Bav are flowing above the danger level. In the neighbouring Raigad district, rivers including Kundalika, Amba, Savitri, Patalganga, Gadhi, Ulhas rivers are also flowing above danger level, the CMO said.

Meanwhile, PTI reported that a five-year-old girl and two others drowned after the Savitri and Ulhas rivers overflowed in the Mahad town and Karjat taluka, respectively.

Indian Navy teams will leave for the Konkan region, shortly, to join rescue operations in Ratnagiri, Chiplun and other areas of Konkan which are seeing heavy flooding, ANI reported.

The Brihanmumbai Municipal Corporation has said that the Modak-Sagar and Tansa lakes, which supply water to Mumbai, started overflowing early morning Thursday. "Two gates of Modak-Sagar lake and one gate of Tansa lake have been opened," the BMC ws quoted as saying by BMC. Out of the seven lakes supplying water to Mumbai, four lakes have started flowing completely this rainy season, the civic body said.

The IMD has forecast that thunderstorms with lightning and light to moderate rainfall are very likely at many places in East Vidarbha on Thursday, an official was quoted as saying by PTI.

In its latest update, the weather department has warned that thunderstorms with lightning and light to moderate rainfall are very likely at many places in Nagpur (Katol, Ramtek), Wardha (Hinganghat), Chandrapur and Amravati divisions during the day. Isolated places in Akola, Bhandara, Yavatmal (Pusad) and Gadchiroli districts of Vidarbha are also likely to witness rainfall.

The massive flooding caused by incessant rain since last night has left hundreds of residents stranded at Chiplun city in Maharashtra’s Ratnagiri district. The Vashishti river, the lifeline of the city, is flowing above the danger mark, district officials said.

The water levels rose to eight to ten feet submerging the first floors of many houses. The state government has rushed two teams of the National Disaster Response Force (NDRF) along with rescue boats as Chiplun has been cut off from its adjoining cities. Read more.

Maharashtra Chief Minister held an emergency meeting to take stock of the flood situation in the Ratnagiri and Raigad districts. He has directed the Disaster Management units and concerned departments to stay alert and start recue operations, ANI reported.

Nearly 6,000 passengers were stranded as train services on the Konkan Railway route in Maharashtra's Ratnagiri district were suspended on Thursday after a river overflowed following heavy rains in the area, officials said.

So far, nine trains have been regulated due to disruption of services on the route, they said.

Regulating trains means they have been either rerouted, short-terminated or cancelled.

Konkan Railway officals said these trains were at safe locations on different stations and the passengers in them were also safe and they were being provided food and water.

"In view of the safety of passengers, train services in this section are suspended temporarily," he said.

According to rail officials, 5,500-6,000 passengers were stranded in trains which were regulated at various stations on the Konkan Railway route. (PTI)

Waterlogging in Thane due to heavy rains, people rescued

Thane is facing severe waterlogging and with the help of  NDRF team rescue is being carried out. No casuality has been reported yet from Bhiwandi in Thane. 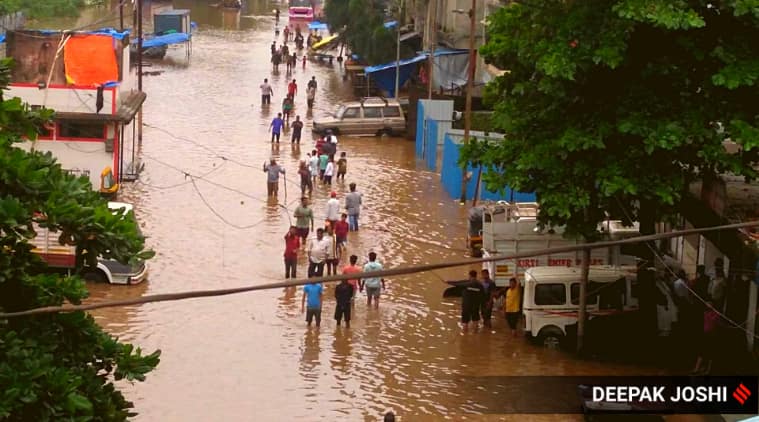 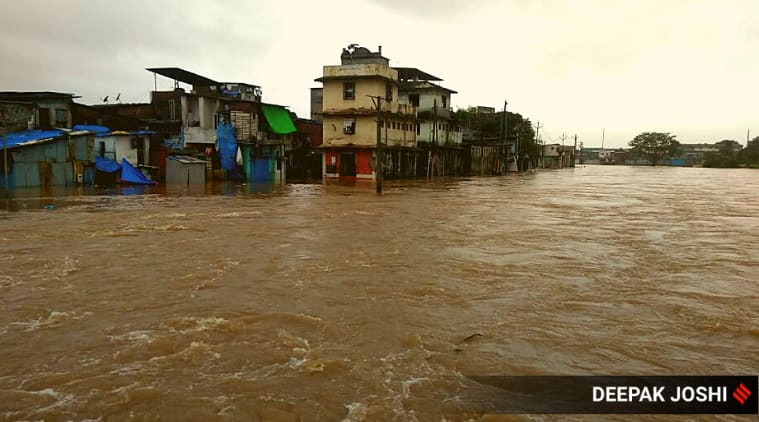 Landslides, waterlogging bring trains to a halt in Mumbai

The heavy rains from Wednesday night disrupted train services of Central Railway in Mumbai, suspending several local and long-distance trains due to waterlogging and accumulation of mud and stones on the tracks. Authorities arranged buses for stranded passengers at two stations.

At least 34 long-distance trains have been cancelled, 26 diverted and 34 short-terminated after the tracks got damaged due to landslides in certain sections.

The National Disaster Response Force (NDRF) has deployed nine rescue teams in Maharashtra, including four in Mumbai, after heavy rains caused flooding in some coastal areas of the state on Thursday.

Mumbai, its neighbouring Thane and Palghar and other districts in the Konkan region have been witnessing heavy downpour since the last few days, leading to inundation at several places and disruption of rail and road transport services.

Water level of many rivers has risen and crossed the danger mark at some places.

An official statement issued by the NDRF said four of its teams have been deployed in Mumbai, and one each in Thane and Palghar districts.

One team will reach Chiplun town in Ratnagiri district by late afternoon.

Besides, two teams have been sent to Kolhapur district. One of it will undertake rescue or preventive evacuation in the flood-prone Shirol tehsil, while the other one will conduct rescue work in Kolhapur city, the NDRF said. (PTI)

On July 19, train services on the route were suspended for a day due to seepage of water in the Old Goa tunnel near Panaji.

The Konkan Railway has a 756-km-long track from Roha near Mumbai to Thokur, located close to Mangaluru.

The route, spread across three states- Maharashtra, Goa and Karnataka - is one of the challenging terrains, as it consists of many rivers, gorges and mountains.

On Thursday, train services of the Central Railway in the Kasara Ghat section of Maharashtra's Thane district and near Lonavala hill town in Pune district adjoining Mumbai were also severely affected after heavy rains caused flooding, washing out of tracks, boulder crashes and mudslides in that region, officials said. (PTI)

The Konkan Railways suspended train services temporarily due to heavy rains resulting into rise in water level of Vashishiti river between Chiplun and Kamthe station in Ratnagiri. Trains were regulated at following stations:

# Train No. 04695 Kochuveli - Amritsar Weekly Special dated July 21 is regulated at Ratnagiri station from 7:17 am.

# Train No. 06346 Thiruvananthapuram Central - Lokmanya Tilak (T) dated July 21 is regulated at Vilavade station from 8:06 am.

The ghat areas of these districts have been warned against possible landslides and mudslides following incessant rains.

Rains have continued to batter Konkan and Madhya Maharashtra where some areas have recorded over 1,000 mm of rainfall in the last one week resulting in severe flooding and overflowing of rivers. Read more

Monsoon in Mumbai has caused several building collapses and waterlogged roads. There were six incidents of wall collapses and 21 tree falls in the city. Areas such as, Chembur, Sion and parts of Andheri have been flooded. Navi Mumbai, Palghar and Thane experiences heavy downpours on Wednesday causing serious waterlogging in low-lying areas.

If the rain continues for the rest of the month, the city could record its wettest July ever — in 2014 the maximum rain for the month was recorded at 1,468.5 mm. In 2005, when the Mumbai floods had followed and the city recorded 944 mm rain in just 24 hours, the month had received a total of 1,454.5 mm showers.

This year, irrecspective of heavy rainfall in early June, rainfall in catchment areas of the lakes was very low. Of the seven, Tulsi and Vihar overflowed on July 16 and 18.