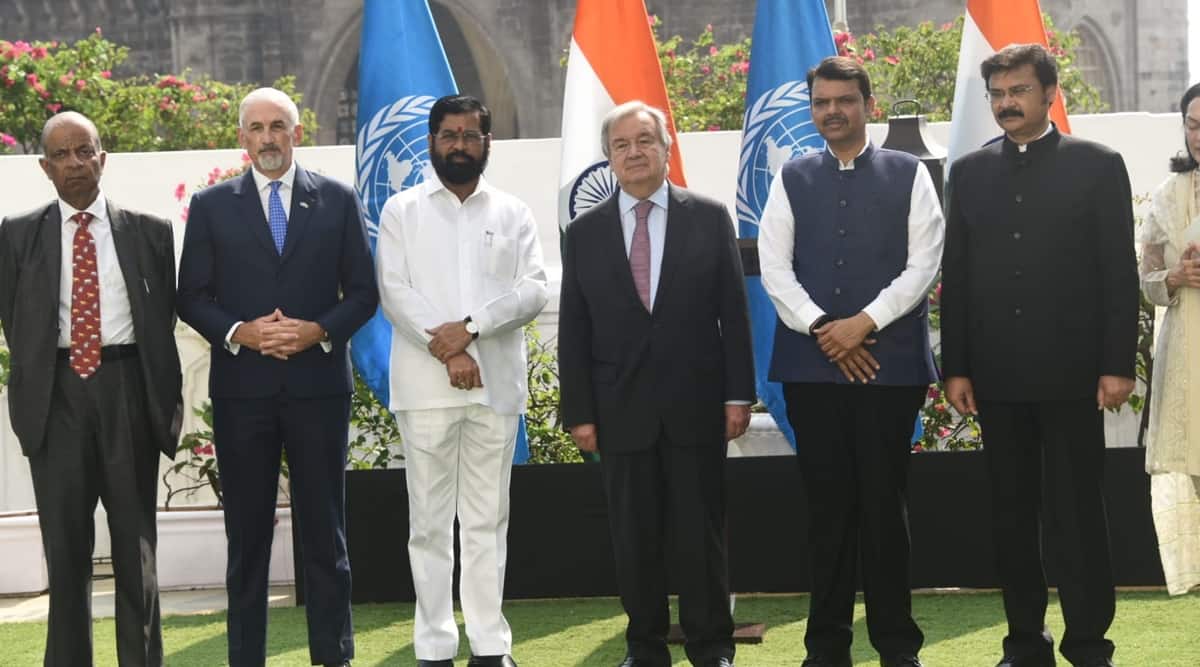 Builder Paras Porwal allegedly died by suicide in Byculla on Thursday, the police said, adding that an investigation is underway.

In other news, UN Secretary General Antonio Guterres paid tributes to the victims of the 26/11 terror attacks at the Taj Mahal Palace hotel in Mumbai on Wednesday on the first day of his three-day visit to India. Speaking on the occasion, Guterres said: “Fighting terrorism must be a global priority for every country on earth and fighting terrorism is a central priority for the United Nations.” Guterres landed in Mumbai on Wednesday shortly after midnight via a commercial flight from London. He was greeted by senior Maharashtra government officials on arrival.

With Diwali around the corner, the Brihanmumbai Municipal Corporation (BMC) has issued an advisory instructing the citizens to follow Covid-19 appropriate behaviour. This is in the background of the discovery of the new sub variant of Omicron with immune evasive properties in Maharashtra. As The Indian Express reported Tuesday, Maharashtra reported its first case of BQ.1 sub-variant of Omicron and the sample was from Pune. Maharashtra has seen a rise in new Covid-19 cases this week – an increase of 17.7 per cent compared to last week. The state has also reported new sub-variants of Omicron — BQ.1 and BA.2.3.20 — apart from XBB, which is a recombinant of BA.2.75 and BJ.1.

The AAP office in Mumbai’s Bandra (East) was allegedly attacked Tuesday night with the party’s city unit president Preeti Sharma Menon Wednesday saying the Congress and BJP were behind it as they have been feeling threatened by its growth. Parts of the AAP office have been damaged but no party worker was hurt in the attack. A formal complaint has been filed at the local police station.

CM Eknath Shinde, Deputy CM Devendra Fadnavis, NCP chief Sharad Pawar and BJP Mumbai chief Ashish Shelar attended a dinner ahead of the MCA polls. “MCA is a highly prestigious association, and Fadnavis and Pawar’s dinner plans are related to MCA. It is purely in the context of sports. Don’t read politics in such events,” a close aide of Fadnavis told The Indian Express.

Will be ready to fight from Worli: BJP's Ashish Shelar

President of Mumbai BJP Ashish Shelar said, "When the time comes for me to fight from Worli, I will be ready."

Mangal Prabhat Lodha, guardian minister, Mumbai Suburbs directed the P/North ward (of BMC) to form a committee, investigate and submit a report regarding Bangladeshi-Rohingya immigrants living illegally in the Malad-Malvani area. The committee is to submit its report within 90 days.

"This will prove to be an important step toward preserving the rights of Bhoomiputraas in Mumbai," Lodha said.

Mumbai Police, in an order, prohibited the sale of firecrackers without permission in Mumbai. The order will remain in effect till November 14. 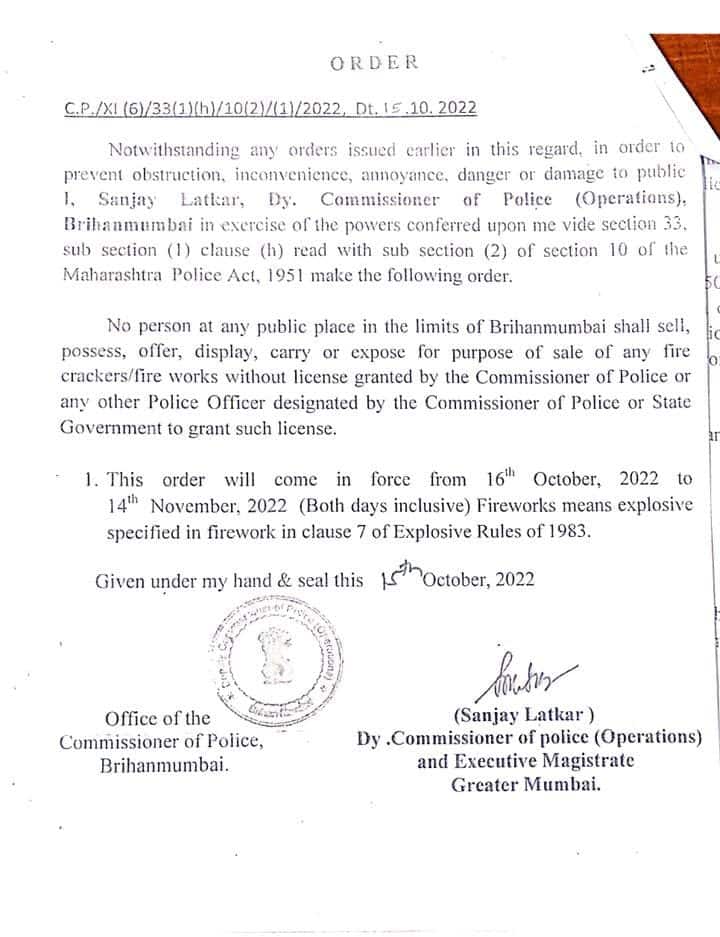 Paras Road in south Mumbai, known for making lanterns and large kandils, made a kandil of the size 3.5 square feet to 12 feet big for political parties in Maharashtra.

A Mumbai resident and her father moved a PIL in the Bombay High Court seeking direction to the CBI and ED to conduct an impartial investigation against the alleged disproportionate assets of former Maharashtra chief minister Uddhav Thackeray and his family.

Will stop toll collection on Nashik-Mumbai NH if road not repaired by end of October: NCP leader Chhagan Bhujbal to NHAI

NCP leader Chhagan Bhujbal Wednesday told National Highways Authority of India (NHAI) officials that his supporters would stop toll collection on the Nashik-Mumbai National Highway if the road was not repaired before November 1. Read more

Commemorating the birth anniversary of social activist and rationalist Narendra Dabholkar on November 1, a five-day art exhibition titled ‘We are on Trial’ will be inaugurated at the Yashwantrao Chavan Centre in Mumbai on October 28 by renowned actor Naseeruddin Shah. The idea is to showcase the work and life of the social reformist through art. Read more

The Bombay High Court cleared the way for two members of the Maharashtra CM Eknath Shinde-led Shiv Sena group to hold the ‘Diwali Pahat’ event on October 24 at Talao Pali area in Thane, by dismissing the plea filed by members of Shiv Sena (Uddhav Balasaheb Thackeray) claiming that the Thane Municipal Corporation had refused to grant them permission for the event with ‘malafide’ intention. Read more

Ram along with his wife Rekha Yadav joined Shinde’s party in presence of MLA Prakash Surve. Ram has cited local politics for forcing him to leave the BJP and join Shinde’s party. Read more

A Mumbai resident and her father recently moved a PIL in the Bombay High Court seeking direction to the CBI and ED to conduct a thorough and impartial investigation against the alleged disproportionate assets of former Maharashtra chief minister Uddhav Thackeray and his family.

“This song has warmth, emotion, and spirit, and we have decided to adopt it as the state’s official song,” Mungantiwar said. Read more

WITH DIWALI around the corner, Chetan Chauhan (42), is busy attending to customers to sell earthen diyas in the congested lanes of Kumbharwada, also known as potter colony, in the century-old pottery hub of Asia’s largest slum Dharavi. After two years of suffering huge losses during the Covid-19 pandemic, his business has finally taken off again ahead of the festival of light.

THE SON of a madrasa teacher, who was killed during the communal riots in 1993 allegedly by policemen, deposed as a witness on Tuesday before the court in the Suleman bakery case.

The witness told the court that he had seen his father, a Maulana, and two students being assaulted by policemen at the madrasa on the day of the incident on January 9, 1993. He also said that his father was taken away by the police and he had later learnt that he had died, with multiple injuries seen on his body. Read more

MMRDA will carry out a feasibility study for a proposal on extending the Metro 9 corridor (Dahisar-Bhayander) from the current depot location to Uttan by 4 km.

The extension of the corridor has been proposed after protests by local farmers whose land was to acquired for the depot. Read more

UPSET OVER the delay in their rehabilitation, the Kalbadevi Girgoan (KG) Metro 3 project affected people (PAP) held a protest march from Thakurdwar to Girgaon.

Pandurang Sakpal, a Shiv Sena Uddhav Balsaheb Thackeray party worker who organised the protest march, said, “Suddenly, the Metro 3 authority has stopped paying rent to residents over validity of their eligibility. They cannot be asked to approach Maharashtra Housing and Area Development Authority over the PAP eligiblity now.” Read more

Hoax call received about terror attacks in a mall, hotel and theatre

Police rushed to a mall, a theatre and a five-star hotel in Mumbai’s western suburbs after false information about terror attacks was received on Tuesday night. The hoax caller has not been booked in a case, according to a police officer.

NCP questioned the Centre on steps it is taking to arrest the slide of the Rupee. The rupee plunged 61 paise to decline below the 83-mark for the first time against the US dollar.

from 2 private banks, a large dollar demand from 2 public sector companies has led to record fall of the rupee.
Who are these 2 companies and why are they making this large demand which is hurting the rupee ?
Ms.Sitharaman must clarify and give truthful answers to the nation(2/2)

NCP chief Sharad Pawar congratulated Mallikarjun Kharge on being elected as the new Congress president and said he was looking forward to working with him for forging unity among Opposition parties.

Congratulations to Shri Mallikarjun @kharge on being elected the President of Indian National Congress. I extend my best wishes to him for a successful and inspiring tenure. Looking forward to working together with him to strengthen the united opposition. pic.twitter.com/sX5pZcxgTe

At a meeting with Union Civil Aviation minister Jyotiraditya Scindia in Delhi, Maharashtra Deputy CM Devendra Fadnavis requested that the Air India building in Mumbai be handed over to the Maharashtra government. He said he had mooted this proposal with the Centre in 2014-15, but it was put on hold during the MVA government's tenure. Fadnavis said Maharashtra needs the Air India building to accommodate its administrative offices.

Meanwhile, a 3,000-page NCB vigilance inquiry report on the Cordelia drug bust case was submitted to the chief of the agency three months back, confirmed sources in the know of matters. They added that departmental and vigilance issues were found against seven-eight NCB personnel, including some who are no longer with the NCB.

Following requests by leaders from across the political spectrum, the Bharatiya Janata Party (BJP) on Monday withdrew its candidate Murji Patel from the Andheri East by-poll, giving a major advantage to Rutuja Latke, the candidate fielded by the Shiv Sena Uddhav Balasaheb Thackeray. Monday was the last day for nominees to withdraw their candidature. NCP chief Sharad Pawar and MNS chief Raj Thackeray had, on Sunday, publicly appealed to the BJP to pull of the contest, considering the sudden demise of Rutuja’s husband, Ramesh Latke, who was the Andheri East MLA.

In other updates from the state, the driving licence of people fined more than five to six times for violating traffic norms will now be suspended for a few months, warned Maharashtra Deputy Chief Minister Devendra Fadnavis on Monday. During a meeting on road safety measures on Monday, state Chief Minister Eknath Shinde and Fadnavis also decided to set up a special squad to monitor vehicles involved in lane jumping along the Mumbai-Pune Expressway. The said squad will “chase down the vehicle drivers” and fine them for jumping lanes, which often leads to road accidents.

THE POWAI-GHATKOPAR water supply tunnel, which was stalled for two years after a Tunnel Boring Machine (TBM) that was used for the digging work got stuck midway in 2020, has received a major fillip with the Brihanmumbai Municipal Corporation (BMC) deciding to resume work on the project.

In order to augment water supply in the eastern and western suburbs, the BMC had decided to set up a water supply tunnel from Veravalli reservoir to Ghatkopar in the eastern suburbs. This project was originally conceived back in 2012. The 2.2-km long Veravalli-Powai tunnel has been completed, while the 4.4-km long tunnel between Powai and Ghatkopar is yet to be completed.

Students who are residents of hostels run by the Social Welfare department of Maharashtra government have complained that they have not received their stipend for nearly three years. However, officials of the department said the stipend has been delayed only for the past five months whereas the stipend for the past two years of the pandemic is disputed as the hostels were closed and this stipend is issued to students in hostels, away from home.