Shiv Sena leader and former minister Aaditya Thackeray on Saturday led a protest against the exit of the Vedanta-Foxconn project at Pune's Talegaon. (Express Photo by Rajesh Stephen)

Mumbai Maharashtra News Updates: Shiv Sena leader Aaditya Thackeray on Saturday lashed out at the Eknath Shinde-led state government for Vedanta-Foxconn’s decision to set up its semiconductor plant in Gujarat instead of Maharashtra. The project went out of Maharashtra after the Shinde-led rebel Shiv Sena MLAs toppled the Maha Vikas Aghadi government headed by Uddhav Thackeray, he said. The Shiv Sena and its youth wing Yuva Sena on Saturday organized a protest over the loss of the semiconductor project at Talegaon in Pune district, the site where it was supposed to come up.

Parts of Mumbai witnessed rainfall on Saturday morning, but the public transport services in the city remained unaffected and no major waterlogging was reported, civic officials said. The city and its eastern and western suburbs received heavy showers between 7 am and 8 am. But the rainfall stopped after that in most of these places.

Maharashtra Chief Minister Eknath Shinde on Saturday appointed guardian ministers of districts in the state, with his deputy and senior Bharatiya Janata Party leader Devendra Fadnavis getting charge of several areas of Vidarbha.

As per the CM's announcement, revenue minister Radhakrishna Vikhe Patil will be the guardian minister of Ahmednagar and Solapur, forest minister Sudhir Mungatiwa of Chandrapur and Gondia, higher and technical education minister Chandrakant Patil of Pune and tribal welfare minister Vijaykumar Gavit of Nandurbar. (PTI)

A 15-year-old girl allegedly died by suicide at Lower Parel in Mumbai Saturday.

The NM Joshi Marg police have registered the matter as a case of accidental death.

The police have not recovered any suicide note but believe that the teenager, a Class X student, may have ended her life after getting a scolding from her parents over studies Friday night. A senior police official said the girl may have died Saturday around 7 am. Read more

The Shiv Sena and its youth wing Yuva Sena on Saturday organized a protest over the loss of the Vedanta-Foxconn's semiconductor project at Talegaon in Pune district, the site where it was supposed to come up. 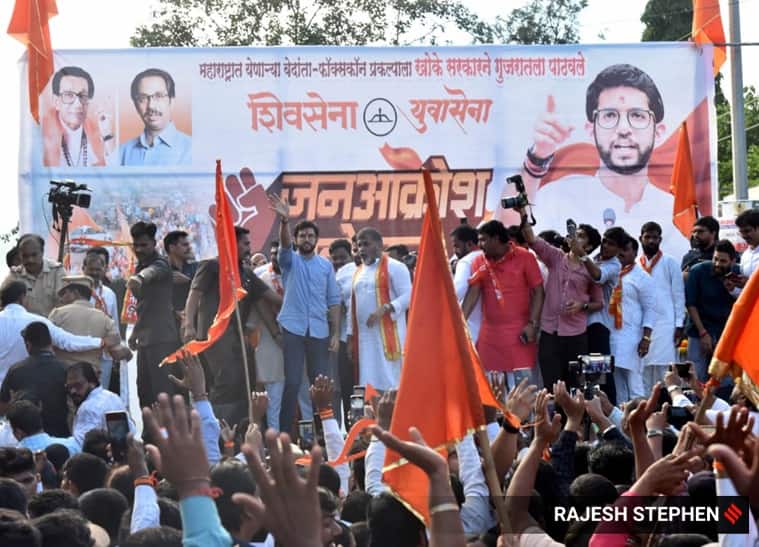 The Western Railway will suspend services from 10 am to 3 pm on Sunday on the up and down slow lines between Mumbai's Santacruz and Goregaon stations to repair tracks as well as signalling and overhead equipment.

Shiv Sena leader Aaditya Thackeray’s Saturday protest at Pune’s Talegaon, the site for the proposed Rs 1.5 lakh crore ($20 billion) semiconductor project of the Vedanta-Foxconn joint venture (JV), has signalled a spiralling political row in Maharashtra days after the JV despite being in discussion with the Maharashtra government on the project for years switched to Gujarat.

A political slugfest has erupted in Maharashtra since September 13, when the Vedanta-Foxconn signed an MoU with the Gujarat government for their semiconductor project, with the Opposition MVA blaming the Eknath Shinde-BJP government for letting the flight of the big-ticket project to the neighbouring BJP-ruled state.

Attacking the Shinde-Devendra Fadnavis dispensation, Sena president Uddhav Thackeray, while addressing a party rally earlier this week, alleged that the government was “lying” on the issue and should be “ashamed” of the project going to Gujarat, even as he offered his support to it to bring the project back to Maharashtra. “Let’s come together and bring it back. I will also come with you,” he told the Sainiks. Read more

The CBI has taken four-day custody of former Mumbai Police Commissioner Sanjay Pandey in connection with the alleged illegal phone tapping of NSE employees by his information technology firm, officials said on Saturday.

Pandey was already in the judicial custody of Enforcement Directorate in connection with probes against him. The CBI approached a special CBI court here seeking his custody in connection with the tapping case which was granted for four days during which he will be interrogated by the agency, the officials said.

In addition to Pandey and former MD and CEO of NSE Chitra Ramkrishna, the CBI has also named another former NSE CEO and MD Ravi Narain in the case. It is alleged iSec Securities Pvt. Ltd, one of the firms that conducted a security audit of NSE, had illegally tapped phones of NSE employees during 2009-17, the CBI said. The company was incorporated by Pandey in March 2001 and he quit as its director in May 2006. His son and mother took over charge of the company. (PTI)

Maharashtra Congress president Nana Patole on Saturday condemned the alleged raising of pro-Pakistan slogans in Pune and demanded a ban on the Popular Front of India (PFI), currently under scanner for allegedly supporting terror activities.

Patole alleged that Congress had demanded to proscribe organisations like PFI in the past and wondered if the BJP-led Centre was not accepting the demand for any political motive. "I condemn the raising of pro-Pakistan slogans in Pune. Divisive and communal organisations should be banned. The Congress wants peace and such tendencies to create a divide should be stopped," he told reporters.

Patole demanded an inquiry to ascertain if organisations like PFI get political support to create a Hindu-Muslim divide. A video has surfaced on social media, which shows that a "Pakistan Zindabad" slogan was allegedly raised during a protest organised by the PFI in Pune. (PTI)

It is the second day in a row when the addition to the tally was more than 100, he pointed out. The city had reported 106 cases on Friday.

Of the new cases, only nine are symptomatic, the Brihanmumbai Municipal Corporation official added. The recovery count rose by 145 in the last 24 hours and reached 11,29,216, leaving the metropolis with an active caseload of 728, he said. (PTI)

Members of the Aam Aadmi Party staged a protest at Bandra East on Saturday afternoon against the civic authorities for the poor road conditions in Mumbai. The party members even mimicked a Hindu final rite 'Shraddha' to protest about the condition of roads. The Popular Front of India (PFI) has large-scale plans to trigger unrest in country, Maharashtra Deputy Chief Minister Devendra Fadnavis said Saturday. He was speaking to reporters at Nagpur airport in the wake of nationwide raids against the outfit and the arrest of its leaders by central agencies under terrorism charges.

Based on the investigations it has emerged that “PFI has now adopted a new modus operandi. It has massive plans to trigger unrest within India. And it was working towards creating communal tension,” Fadnavis said. Read more

Officials from the Central Goods and Services Tax (CGST) Bhiwandi Commissionerate Friday arrested the IT head and partner at a company on charges of evading GST and ITC collectively worth Rs 78 crore.

The accused has been identified as Harshal Oze, the IT department head and partner at M/S AS Agri and Aqua LLP. Read More

NCP office-bearer, Aditi Nalawde, filed an online complaint with the suburban Worli police station and demanded appropriate action against the concerned Twitter handle used for posting Sule's picture and the person who posted it. Nalawade stated that the photo was posted to malign the image of the elected representative.

Incidentally, the NCP on Friday accused Lok Sabha MP Shrikant Shinde, son of Chief Minister Eknath Shinde, of sitting in a chair meant for his father, although the parliamentarian from Kalyan had claimed the picture had been taken at the office at their private residence.

Students and climate activists in Mumbai took to the streets on Saturday morning to raise their voices against climate change.

The march was carried out in Dadar by members of the environment protection NGO 'Fridays for Futures'. The participants held placards aimed at spreading awareness about global climate change and environmental cleanliness. The streamer gave a sneak peak into its 12 titles during the India segment of the global fan event “TUDUM”. It was hosted by influencer-actor Prajakta Koli and comedian Zakir Khan in Mumbai. Netflix showcased a bloody, retro and humour-filled teaser of 'Guns & Gulaabs', exploring a person's dark streak. It features Rajkummar Rao, Dulquer Salmaan and Adarsh Gourav in the lead.

'Rana Naidu', an official adaptation of the popular American drama series 'Ray Donovan', follows the life of Rana Naidu (Rana Daggubati), the go-to guy for everyone in Bollywood when they have a problem. Set in Bombay, where glitz meets grime, Rana Naidu does the dirty work for the city's top power players; making the problems of the city's celebrities, superstar athletes, and business moguls disappear.

Yuva Sena president Aaditya Thackeray has left from Matoshree to reach Maval in Pune where he will be holding a protest rally against the government on the Vedanta Foxconn issue.

A 200-metre-stretch below the Sion Trombay flyover once used to be a den for the local miscreants but now it reflects the literary works of writer, poet and social reformer Lok Shahir Sahitya Ratna Annabhau Sathe through paintings and murals that are solely based on the theme of life and character of the social-reformer.

As a part of beautification for this erstwhile abused space, the Brihanmumbai Municipal Corporation (BMC) painted the walls and pillars adjoining the surrounding of this small land parcel with vibrant colours. Thus, showcasing portraits of Sathey and of course the characters from his literary works as well. Read More

The Nationalist Congress Party on Saturday accused the spokesperson of the Eknath Shinde-led Shiv Sena faction of sharing a "morphed" photo of Baramati MP Supriya Sule sitting on the chief minister's chair, and urged the Mumbai police to take action.

Incidentally, the NCP had on Friday accused Lok Sabha member Shrikant Shinde, son of Chief Minister Eknath Shinde, of sitting in a chair meant for his father, although the parliamentarian from Kalyan had claimed that the picture had been taken at the office at their private residence.

Sheetal Mhatre, who is the spokesperson of the Shinde-led Sena faction, tweeted a photo of NCP MP Sule sitting on the chief minister's chair. In the post, Mhatre also asked "Look who is sitting on the chief minister's chair". The photo shows Sule sitting on a chair and behind her there is a board with "Maharashtra Government - Chief Minister" written on it. It also shows her being flanked by former ministers and NCP leaders Dilip Walse Patil and Rajesh Tope. (PTI)

Maharashtra Deputy CM Devendran Fadnavis on Saturday said the action against  PFI indicated there is large-scale evidence with NIA and ATS.

"In the past, the Kerela government had also voiced concern and sought its ban. A lot of information is emerging. The investigation is underway. The PFI had resorted to new modus operandi to create unrest within the country," he said.

Parts of Mumbai witnessed heavy rains on Saturday morning, but the public transport services in the city remained unaffected and no major waterlogging was reported, civic officials said.

The city and its eastern and western suburbs received heavy showers between 7 am and 8 am. But the rainfall stopped after that in most of these places.

The taxi and auto unions in the city have decided to call off their proposed strike on September 26 after receiving assurances from the state government of a fare hike starting October 1. In Mumbai there are 48,000 taxis and two lakh autorickshaws. Currently, the minimum fare for taxis is Rs 25 for 1.5-km while it is Rs 21 for autos. After the increase is implemented, the minimum fare for taxis will go up to Rs 28 and for autos it will be Rs 23. However, the state government is yet to come out with an official notification approving the fare hike.

The Brihanmumbai Municipal Corporation (BMC) has planned to redesign tourist amenities and visitor facilities at the landmark tourist heritage precinct of Gateway of India in South Mumbai to provide an unhindered view of the monument. Presently, the view is hindered by a toilet block, ticketing booths, a security chowky and other temporary sheds that have also come up around the boundary of the precinct that is used by the security.