Mumbai Dongri Building Collapse Live Updates: Kesarbhai Mansion was constructed in 1934, and the portion that collapsed is said to have been added in the 1980s. The building was unauthorised, officials of the Maharashtra Housing and Area Development Authority (MHADA) said, adding it was not under its supervision.

Mumbai Dongri Building Collapse Live Updates: Three bodies, including that of two minors, were pulled out from the debris on Wednesday morning taking the death toll in Mumbai’s building collapse to 13. Many are still feared trapped and nine others are injured in the crash.

The ground-plus-four-storey ‘Kesarbai’ building, located in a densely populated narrow lane in Dongri’s Tandel Street, came crashing down just before noon. Maharashtra Chief Minister Devendra Fadnavis has ordered a probe into the incident with residents claiming that the collapse was triggered by repair work in the basement godown. Prime Minister Narendra Modi expressed anguish over the loss of lives.

Kesarbhai Mansion was constructed in 1934, and the portion that collapsed is said to have been added in the 1980s. The building was unauthorised, officials of the Maharashtra Housing and Area Development Authority (MHADA) said, adding it was not under its supervision.

The difficult access to the site prevented ambulances and earthmovers from being deployed, and rescue workers, including residents, used bare hands to remove concrete chunks, door frames and household items. Ambulances had to be parked some 50 metres away.

CM @Dev_Fadnavis announces ₹5 lakh for the next of kins of deceased in #MumbaiBuildingCollapse incident in Dongri yesterday.
And ₹50,000 for the injured and all medical expenses of the injured will be borne by Government of Maharashtra.

An old law and a killer knot: Why Mumbai’s old buildings keep collapsing

The collapse of the Kesarbai building in Dongri has underscored, once again, the plight of families who live in the 14,375 old cessed buildings in South and Central Mumbai.

Under Development Control Rules 33/7 (for single cessed structures) and 33/9 (for clusters of cessed buildings), the state government offers private developers a floor space index (FSI) of three and above, depending on the number of tenants. While the plan was to revamp these properties and offer a safer and better quality of living to the owners and the occupiers of such property, complaints that the developers have extracted loopholes to maximise profits have been rampant. The result: redevelopment or reconstruction of most of these properties is stuck.

Search operation to continue till last piece of rubble is removed: NDRF

"So far, 13 people, including six males, four females and three children have been declared dead, while nine have got injuries and getting medical treatment," Sachidanand Gawde, the PRO of the National Disaster Response Force (NDRF) battalion, told PTI. Gawde said the search and rescue operations continued the whole night and was still on. "It (search and rescue operations) will go on till the last piece of rubble is not removed from the spot," he said.

Rescue operations underway in Mumbai. The NDRF carries out a search operation with the help of sniffer dogs at the site

Just three years old, wrapped in the arms of his grandmother, Abdul Rehman was among the first to be rescued when a portion of a building, Kesarbai Mansion, in Mumbai’s Dongri area collapsed Tuesday morning. For doctors who first saw him at the Habib hospital, it was nothing short of a miracle. They found that he had survived with a few scratches.

Abdul’s sister Aisha, who is three months old, also survived after their father Nisar held her tight and made his way out of the debris.

Among those dead was Sadiya, the mother of Abdul and Aisha.

Two minors succumbed to the injuries Wednesday morning, bringing the death toll to 12.

In case you have just joined us, 10 people were killed after a building collapsed in Mumbai's Dongri yesterday. Scores of locals joined in the rescue efforts, forming a human chain to help in removing the debris brick by brick and picking up slabs of concrete to locate those buried below the debris.

Dongri building collapse: ‘Redevelopment of building was neither viable nor feasible’

A Dongri-based builder whom residents of the Kesarbhai Mansion had approached for its redevelopment earlier this year had maintained that the project was “neither viable nor feasible”. In the absence of a contract or sustained interest from the Trust that owns the building, talks of redeveloping the building, a part of which collapsed on Tuesday, had been finally shelved in March.

A group of tenants of Kesarbhai building had approached Rizwan Malik, the proprietor of ASB Realtors, to construct a 23-floor tower after demolishing the three-storey structure earlier this year. But Malik claimed that he was never seriously interested in the project. Read more

As agencies traded charges over the ownership of the collapsed portion of the four-storey Kesarbai Mansion — a cessed Maharashtra Housing and Area Development Authority (MHADA) property — Mumbai has seen 3,528 accidents involving MHADA buildings between 1971 and 2018, leading to the deaths of 894 people.

On Tuesday, an illegal extension of Kesarbai Mansion collapsed in Dongri, killing at least 10 people. While the MHADA maintained that it was not responsible for the illegal construction, the collapse again highlighted the plight of the residents of such 14,375 cessed MHADA buildings in south and central Mumbai. It has also put under scanner the structural repairs and reconstruction of these buildings — the statutory responsibility of the Mumbai Buildings Repairs and Reconstruction Board (MBRRB).

Activists claimed that residents of these buildings face the ignominy of not being recognised as owners of these properties and are vulnerable to exploitation from builders who gain massive floor space index sops from the state for redeveloping these structures. Read more

With the three-storey Kesarbai Mansion in Dongri partially collapsing on Tuesday, a long queue of local residents and civic officials snaked out of the narrow alley from the building till the main road, as boulders and crates full of debris exchanged hands the entire day to clear the site and locate the injured.

At least 10 people, including an 18-month-old boy, were killed and eight others were injured in the collapse. Rescue workers were unable to say how many more were feared trapped under the rubble. On Tuesday night, at least six persons were missing. Dr Sanjay Surase, superintendent at JJ hospital, said that seven remain admitted with blunt trauma, head injuries and suffocation problems. “Those who died mostly suffered suffocation and head injuries,” he added. Read more

Details of those injured and deceased 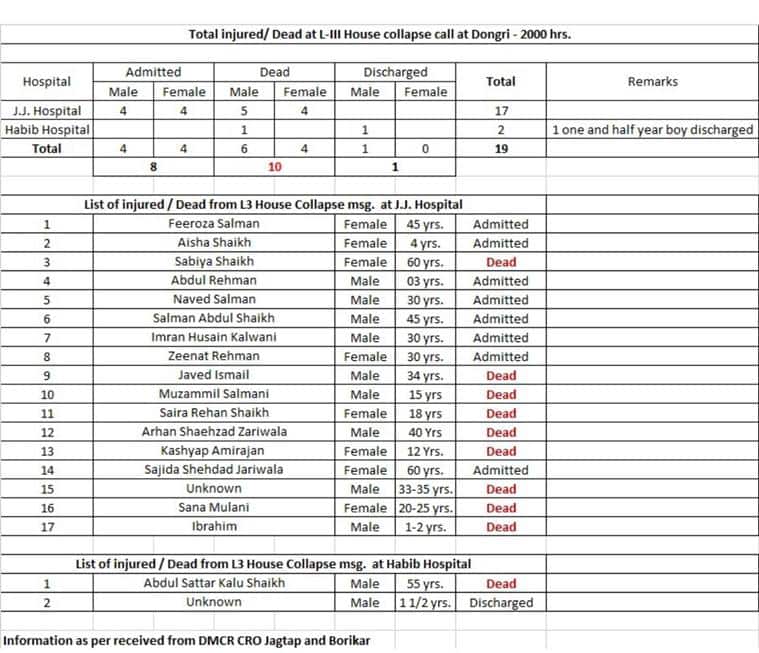 Congress general secretary Priyanka Gandhi Vadra on Tuesday urged party workers to extend all possible support in the relief and rescue operations at the Mumbai building collapse site. A four-storey residential building collapsed in a congested locality in Mumbai, claiming four lives and leaving over 40 people trapped under the debris, reports PTI.

"I pray for the well-being of those trapped in the four-storey residential building that collapsed in Mumbai. My condolences to the bereaved families," Priyanka Gandhi said. "Congress workers must extend all support possible in the relief and rescue operations. This is the third such incident recently. Why wasn't action taken on time?" she said in a tweet in Hindi.

The building in south Mumbai's Dongri area, which is dotted with narrow lanes, collapsed shortly before noon, trapping over 40 people under the debris.

The site of the building crash in south Mumbai's congested Dongri area was crowded and chaotic as hundreds of onlookers created hurdles in the rescue operation even as NDRF and civic personnel attacked the rubble with bare hands to reach survivors. The narrow road leading to the ill-fated four-storeyed building meant National Disaster Relief Force jawans could not get earth-moving equipment near the rubble, leaving them with no option but to carry out the search-and-rescue operation manually.

The rescue work is expected to get prolonged because of this, a NDRF official at the site said. Onlookers crowding the site and lanes leading to it threw up problems of quick evacuation of the injured to ambulances and onward to hospitals, an official said.

Several people in the area were also seen lending a helping hand or trying to stay out of the way of those officially tasked with bringing out those trapped. A youngster was seen shouting out instructions through a megaphone to onlookers to clear the area so that the rescue operation could be carried out with any more challenges than the topography of the place already posing.

A heavy deployment of police personnel and barricading of ground zero helped matters, said officials. Congress leader Milind Deora and Minister of State for Housing Ravindra Waikar were at the spot and expressed grief on the incident. (PTI)

The collapse of the Kesarbai building in Dongri has underscored, once again, the plight of families who live in the 14,375 old cessed buildings in South and Central Mumbai. Five individuals were dead, and many were trapped in the wrecked building as rescuers thronged the site on Tuesday afternoon. Why does Mumbai have so many structurally unstable buildings that are put to added risk every monsoon? READ HERE

Mumbai Congress chief Milind Deora on Tuesday condemned the building collapse incident in Dongri and said it was "unfortunate". He said that such incidents take place in Mumbai every year. "Mumbaikars must ask what the govt is doing," he was quoted as saying by ANI.

Milind Deora, Congress on #MumbaiBuildingCollapse: This is unfortunately something that happens in Mumbai every year during monsoon. You'll see walls collapse, there are pot holes on roads where people die, young boys fall into manholes. Mumbaikars must ask what the govt is doing pic.twitter.com/a8rYKVlyRD

The death toll in the four-storey building collapse at Dongri, which took place at 11.40 am Tuesday, rose to five as several others were feared trapped under the debris. Nine people have been reported to be injured in the incident so far. An NDRF team and government officials were present at the spot to carry out relief and rescue operations.

Four dead so far; probe underway to ascertain exact cause of collapse

As the death toll rises to four in the Mumbai Building collapse at Dongri, a probe has been ordered by Maharashtra Chief Minister Devendra Fadnavis to ascertain the exact cause of this disaster. According to a MHADA official, the building which collapsed was illegal since 1987. He claimed that the collapsed structure is not Kesarbai apartment. The portion which collapsed was illegal construction and Kesarbai apartment was vacated in 2018 by MHADA after the notice issued by BMC, he said.

However, a thorough probe will only reveal whether 40 tenants were living in an illegal building since 1987.

As the death toll in the Mumbai building collapse rose to three, Prime Minister Narendra Modi condoled the loss of lives. "Collapse of a building in Mumbai’s Dongri is anguishing. My condolences to the families of those who lost their lives. I hope the injured recover soon. Maharashtra Government, NDRF and local authorities are working on rescue operations & assisting those in need," he said.

Collapse of a building in Mumbai’s Dongri is anguishing. My condolences to the families of those who lost their lives. I hope the injured recover soon. Maharashtra Government, NDRF and local authorities are working on rescue operations & assisting those in need: PM @narendramodi

At least two people died after suffering serious injuries from the building collapse. The Brihanmumbai Municipal Corporation's disaster management cell said the number of people feared trapped could be anywhere between 40 to 50.

Last week, a three-storey building in Himachal Pradesh's Solan district collapsed amidst heavy rains in the region. At least 11 of the 14 people  killed in the collapse were Junior Commissioned Officers (JCOs) of 4th Regiment of Assam Rifles.

The building, Sahaj Tandoori Dhaba, situated at village Runan Gohro along the Kumarhatti-Nahan road had collapsed around 3.15 pm on Sunday.