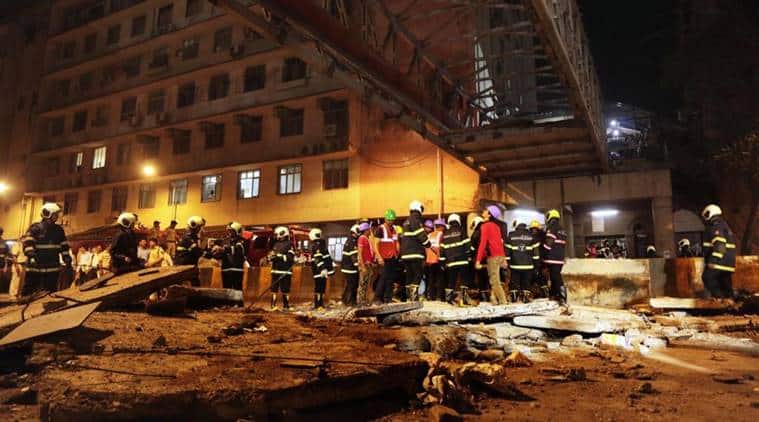 Four days after the foot overbridge outside the Chhatrapati Shivaji Maharaj Terminus (CSMT) collapsed in Mumbai killing six and injuring 31, a director of Prof DD Desai’s Associated Engineering Consultant and Analyst Private Limited was arrested on Monday for submitting “faulty” audit reports to the civic body.

The director, Neeraj Kumar Desai (46), was arrested from Saki Naka on Monday after the Azad Maidan police did not find him at his residence in Vile Parle.

The police said that Desai, who had a masters degree in engineering, had been working as a professional structural engineer and had personally audited the bridge. “He is a professional and he knew that such negligence could lead to the death of several people. So, we have invoked more stringent sections… now he won’t get bail easily,” said Deputy Commissioner of Police Abhishek Trimukhe (Zone I).

According to the records available with BMC, Prof D D Desai’s Structural Engineering and Analyst Private Limited was set up in 2003 and has three directors — Neeraj Kumar Desai, Hemlata Desai and Dilip Kumar Desai. The company was awarded a contract of Rs 63 lakh for conducting structural audit of 39 bridges in the island city.

The police said that besides recording the statements of the 31 injured and several witnesses, they have also recorded the statement of BMC employees, including chief engineer (Bridges) Sanjay Darade. “We recorded Darade’s statement to understand the working of BMC,” said Trimukhe.

As per the inquiry conducted by the BMC into the bridge collapse incident, the firm had audited bridge in December 2016. “After December 2016, the firm conducted another audit of the bridge in 2017, following which, it submitted a report in (August) 2018,” said Trimukhe. The report had stated that the bridge at CSMT was in a “good” condition.

Following the collapse of the bridge, BMC has issued a showcause notice to the firm to blacklist it on charges for negligence.

The police said that they are investigating whether any BMC employee or Railways official is involved in the case. “So far, we have not found anything. It a technical investigation and we are taking help of the experts,” said Trimukhe.