The work on Versova beach is being carried out by the Public Works Department (PWD) for building an ‘anti-sea erosion bund wall’ from Sagar Kutir to Hindu Smashanbhumi. 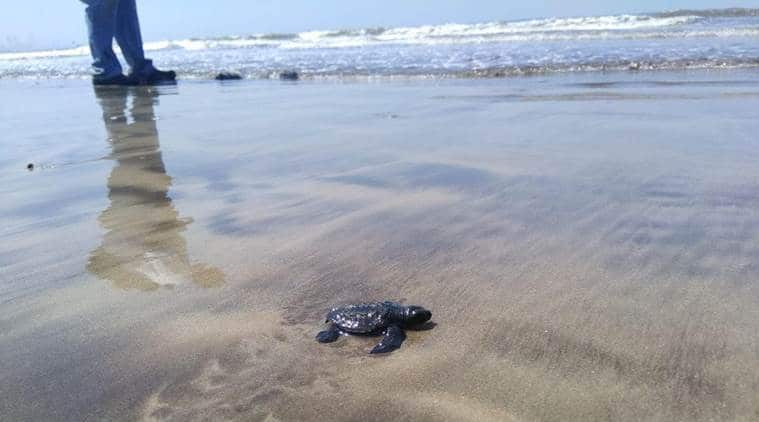 Activists have opposed the construction of an ‘anti-sea erosion bund wall’ at Versova beach on grounds that the construction could end up destroying the breeding grounds for Olive Ridley turtles.

The work on Versova beach is being carried out by the Public Works Department (PWD) for building an ‘anti-sea erosion bund wall’ from Sagar Kutir to Hindu Smashanbhumi. The 1.2-km-long bund wall will protect the structures at the beach from tidal action. The work was started about two months ago but was noticed by activists only last week. Activists have claimed that the work will alter the coastline, and that it was “illegal”.

Citizen activist Zoru Bhathena on Monday filed a complaint with several government agencies, including the Environment department, seeking stoppage of work. Bhathena pointed that RCC (Reinforced Cement Concrete) tetrapods were being dumped on the beach and the wall was being constructed in violation of the law.

“A sandy beach is public… for the benefit and welfare of all and it is the duty of the state to protect the same under the public trust doctrine. A sandy beach cannot be split into half with an RCC wall and covered with tetrapods. The work is more of walkway than a wall bund to prevent sea water. This will lead to complete obstruction for public access. The PWD drawing shows that work is being carried out to prevent erosion. But the fact that Versova is a sandy beach is itself sufficient proof to show that there is no sea erosion on this stretch,” said Bhathena.

Versova beach came into the limelight in 2018, when Olive Ridley turtles hatched eggs on the beach after a gap of 20 years. This was achieved after continuous cleaning efforts for years by lawyer Afroz Shah and other citizens. The cleaning of Versova beach was hailed at an international level.

Speaking about the achievement, Bhathena said, “No construction work can be carried out on the protected Versova beach without prior approval of the Forest (Wildlife) authorities, and without taking adequate care that turtle breeding areas are not destroyed.” He also pointed out if some anti-erosion work was genuinely required, a hazard line will have to be demarcated and an Environment Impact Assessment study conducted for at least a year to determine the change in tide and ecology. Bhathena also expressed concerns about the work and said that it could change the existing coastline and lead to destruction of the beach.

The PWD, however, said work was going on as per clearances from the Coastal Regulation Zone (CRZ) and the State Environmental Impact Assessment Authority (SEIAA) Committee, and no violation of law was taking place.

Speaking to The Indian Express, Chief Engineer of PWD Sunil Wandhekar said, “We have all the required permissions from authorities. The wall is being built to prevent beach erosion and to protect the structures located at the shore from high tide. There was some complaint from locals about the height of the wall, because of which their view will be affected… I have instructed my staff to reduce the height and take note of citizens’ suggestions.”

When asked about tetrapods, Wandhekar said that after construction is completed, Versova beach will look like Marine Drive and Dadar, where tetrapods are kept. “I got complaints about tetrapods obstructing the movement of people. After the wall is ready, these tetrapods will be shifted close to walls, like we have done in Marine Drive and Dadar beach. If there are any more suggestions, we will surely look into them,” Wandhekar said.

Dead assets in govt to be shown the door, says Nitin Gadkari