Doctors say the Egyptian is on a strict 1,200-calorie per day diet regime. She has already lost 30 kg, has a new eight-hour sleep cycle and can now even blows kisses to her doctors thanks to improved limb mobility. In just five days after landing in Mumbai, this is the shift so far in Eman Ahmed’s condition. Believed to be the world’s heaviest woman, Eman has been admitted at upscale south Mumbai’s Saifee Hospital, and is being treated for sleep apnea, hypothyroid, diabetes, hypertension, kidney problems, fluid retention and most importantly obesity. With her first surgery less than three weeks away, doctors said that the main target is to shrink the size of 37-year-old Egypt national to able to take her to the operation theatre.

“We need to get her in shape (for the surgery). The operation table can take the weight of 450 kg but the width of the elevator is only 141 cm. Eman is currently 151 cm (in width),” said bariatric surgeon Dr Muffazal Lakdawala under whom Eman is being treated.

Eman has been put on a high protein and fibre diet to systematically reduce her weight. Doctors have aimed to bring down Eman weight by 200 kg in 2017. She weighed around 500 kg at the time of her admission.

Doctors said that Eman is on a strict 1,200-calorie per day diet routine, where she wakes up at 7.30 am and is fed every two hours. However, doctors claimed to be “walking a tight rope” as it is important control her calorie content and to balance it out with her kidney condition and the fluid that is being drained out of her body. Eman is on dialysis, added doctors.

Fluid collection, which is at least 70-100 kg of her total weight, had made Eman’s skin as hard as a stone, according doctors. “Her skin is now soft. She sleeps between 10-11 pm that help her maintain a sleep cycle balance,” Lakdawala added.

Earlier, Eman would only get two-three hours of sleep due to a severe restrictive lung disease that would not allow her to sleep for long. “On the first night that she came here, she did not sleep the entire night even though she was exhausted and tired. She’s been put on a sleep-nap machine,” an official claimed.

Doctors are contemplating feeding Eman using a tube as she is still coughing and they fear she could aspirate (inhale) the food she is being served. “She finds it hard to swallow. Two special pumps (will be used) to feed her through a very tiny tube used to feed infants,” the official added.

Eman, who is undergoing two sessions of physiotherapy every day, is now able to lift her limbs higher, doctors revealed.

“She gets very tired with her two hours of physiotherapy sessions….There was earlier a chance of her getting a blood clot but now, since we have made her blood thin, there are hardly any chances that. After a week, she will be used to movement…Earlier, her hands couldn’t go up, but now they have started to come up…Now, she has started to blow kisses every day,” said Lakdawala, adding that her limb mobility is much better.

Doctors added that Enam’s lymphedema condition is slowly subsiding and her back sores are also improving. She is currently placed on a water bed that has reduced the stress to her body and will soon undergo speech therapy. 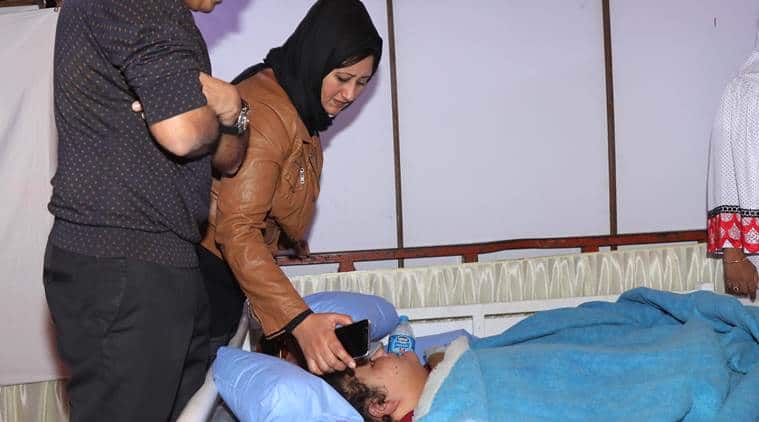 Eman Ahmed from Egypt who weighs 500 kg brought to Saifee Hospital in Mumbai on Saturday morning.
Eman was brought from Airport in a specially made truck and lifted and carried into the hospital with the help of a crane. Express photo by Nirmal Harindran, 11th February 2017, Mumbai.

Meanwhile, after Union External Affairs Minister Sushma Swaraj facilitated the visa process of Eman in December 2016, the Egypt national’s medical visa is due to expire on March 7. Hospital authorities would soon approach the Foreigner Regional Registration Office to renew her medical visa.