Minister vows to clean up Mithi river, make it tourist hotspot in 2 years 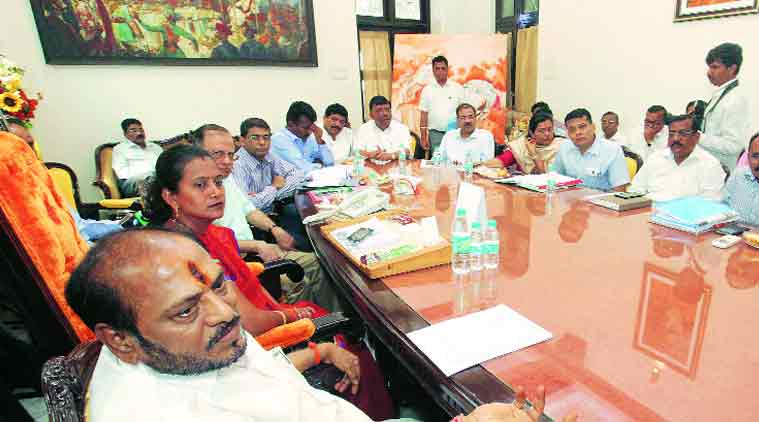 Within two years, Mithi river will be clean and can be used as a tourist spot, promised state environment minister Ramdas Kadam during his whirlwind visit of different ‘problem areas’ along the filthy Mithi river on Monday.

Kadam along with Mayor Snehal Ambekar visited Mahim causeway at the confluence of Mithi river and the Arabian Sea, and various stretches along the river from Mahim to Kurla, stopping at each of the stops and shooting off orders to officials of different agencies involved in the Mithi River Development project. Of the 17.84 km of the river length, 11.84 km is under BMC’s jurisdiction and 6 km is under MMRDA’s.

Noting the sewage water that composed most of the water in the river, Kadam told officials to immediately block the outlets of sewage into the river. Around 40 spots have been identified where sewage is released into the river, officials informed the minister.

“Block the outlets and use pipelines to release treated sewage water into the sea. Use whatever technology is needed to clean the water,” he told BMC and MMRDA officials. “Within two years, we should be able to have tourist activities in the river.”

The Sena when in opposition had blamed the Mumbai Metropolitan Region Development Authority for the delay in the rivers clean up. Now with the party in control of the BMC as well as the state Kadam is keen that the party goes all out to spurge up the city before the BMC elections.

“Find out who the builder is and file a case against him for building these illegal structures. Within eight days, all illegal structures along service roads of Mithi should be demolished,” he told MMRDA officials.

He also asked senior BMC and MMRDA officials to ensure demolition of the 1,800 odd illegal structures along the river’s retaining walls.

According to additional municipal commissioner SVR Srinivas, while encroachments along Mithi are being controlled, cleaning the river using technology and laying sewerage lines along the river are the two main works remaining.

“We need to built sewerage lines along the river so the sewage from areas along Mithi can be discharged into the sea. Problem with encroachments is that people living here are Project-Affected People (PAPs) from Santacruz Chembur Link Road and Mithi River, whose buildings where they will be rehabilitated are under construction nearby. We recently demolish 40-50 residential encroachments along the Kula Kalina bridge two month ago,” he said.

An entourage of around 25 cars transporting senior officials from the environment department, Mumbai Metropolitan Region Development Authority (MMRDA), Brihanmumbai Municipal Corporation (BMC), Maharashtra Pollution Control Board (MPCB) as well as the suburban collector followed the minister and took note of his instructions on Monday. The civic body had only in November commissioned IIT-Bombay to conduct a survey on the possibilities of treating water in Mithi river and Vakola nullah. The civic proposed to spend Rs 80 lakh on the survey. This was necessitated after MPCB issued notices to the civic body for inaction in controlling polluting the river.