Ahead of monsoons, a fresh door-to-door screening in the tribal district of Nandurbar, which carries one of the highest burden of malnutrition in Maharashtra, has found cases of severely acute malnourished children four times more than the existing figures. 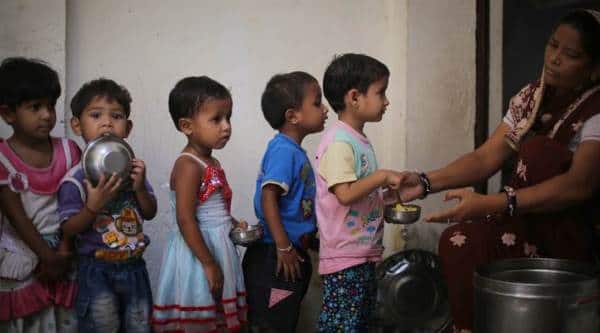 In Nandurbar, 16.8 per cent of the over one lakh children, aged less than six years, screened were malnourished. (Express Photo/File)

Ahead of monsoons, a fresh door-to-door screening in the tribal district of Nandurbar, which carries one of the highest burden of malnutrition in Maharashtra, has found cases of severely acute malnourished children four times more than the existing figures.

In Nandurbar, of the 1.13 lakh children aged less than six years registered with the state women and child development (WCD) department, over a lakh were screened. The survey found 16,900 (16.8 per cent) of the children malnourished. Among them, 3,455 were severely acute malnourished (SAM). This was four times higher than the 821 SAM children recorded in anganwadis across the district in April.

Officials from WCD said the intensive screening has led to a higher case record. Realising that a higher number of children face the risk of slipping into malnourishment, Integrated Child Development Services (ICDS) officials have been directed to intensify screening in other districts. “One factor of under-reporting is the practical difficulty of reaching out to a larger population. The state has taken up the task of rolling out village child development centres (VCDC) in all tribal and non-tribal districts to tackle malnourished children,” said Indra Mallo, the ICDS commissioner.

A VCDC is a centre in an anganwadi that provides six meals per day instead of the traditional two meals daily in an anganwadi. Under VCDC, they are provided six meals for 40 days at a stretch.

The detailed screening in the northern Maharashtra district was directed following a state-level core committee meeting in April, where similar findings of an NGO and the state public health department were discussed.

In April, The Indian Express had reported the findings of the health department in three districts — Pune, Nandurbar and Raigad — where the percentage of wasting and of undernutrition was found higher than the National Family Health Survey 4 and the ICDS records. In certain blocks of Pune for instance, the survey had found 28.18 per cent children underweight as opposed to the ICDS data that stood at 10.38 per cent.

A similar survey by NGO Sathi in 2017 had found that of the 1,659 children it surveyed, anganwadis records in 50.9 per cent of the cases were either missing or incomplete. The study also pointed that there were 29.1 per cent malnourished children, and the proportion of under-reporting was higher in Palghar and Nandurbar.

“Both the civil society and the health department have agreed that there is massive under-reporting of malnutrition. This is not exceptional,” said Abhay Shukla, who was part of the Sathi survey. Maintaining that this problem exists in all districts, he added: “We miss a large number of children at risk of dying. A moderately malnourished child faces 2.2 times and severely malnourished children 6.8 times higher risk of death than a normal child.”

Civil society activists said that anganwadi workers were either facing issues such as lack of proper calibrated weighing machines or purposely not reporting accurate figures to avoid displaying high malnourishment in their area.

Last week, WCD Minister Pankaja Munde had informed the state Assembly that 995 children, aged less than six, had died in the last five months across the state. In 2017, across 16 districts, 2,161 children had died.

Malnutrition has been a contributing factor in making a child prone to infections, specially during monsoons. The under-reporting is also suggestive of a large section of children falling frequently ill but getting missed by the WCD department.

Latest data from ICDS in January showed that across Maharashtra, 29,007 children were severely underweight and 1.29 lakh were moderately underweight. In January alone, 302 children had died. According to WCD officials in Nandurbar, in January, the district had recorded 38.7 per cent of underweight children — 35,270 of the 90,904 children screened.