The simmering tensions of the last few days came to a head on a day two Maharashtra ministers called off their scheduled visit to Belagavi, the border district in Karnataka that is at the centre of the dispute. 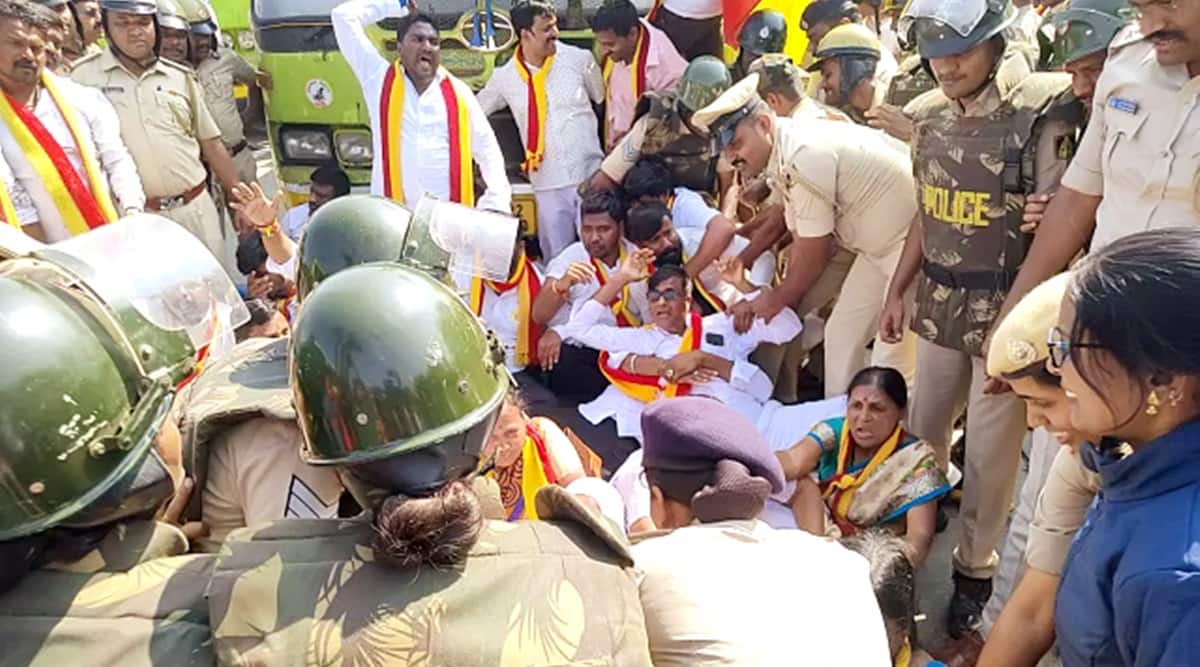 VEHICLES WITH Maharashtra number plates were attacked in Karnataka’s Hirebagewadi area near Belagavi on Tuesday afternoon and several people were detained as the border dispute between the two states spilled over to the streets on Tuesday.

The simmering tensions of the last few days came to a head on a day two Maharashtra ministers called off their scheduled visit to Belagavi, the border district in Karnataka that is at the centre of the dispute. Hours after the vehicles came under attack, Maharashtra Deputy Chief Minister Devendra Fadnavis said, “I want to tell Karnataka that while the matter is pending in the Supreme Court, it is not appropriate to make instigating remarks or try to spoil the atmosphere. It is inappropriate and unlawful.”

Urging Maharashtra residents to not react violently to the incident, Fadnavis said he would inform Union Home Minister Amit Shah about the development.

Taking to Twitter, Karnataka Chief Minister Basavaraj Bommai posted that he had spoken over phone with his Maharashtra counterpart Eknath Shinde, and agreed that “peace and law and order” should be “maintained in both the states”. “…however there is no change in our stand as far as Karnataka border is concerned. And the legal battle will be pursued in Supreme court,” Bommai posted.

Meanwhile, NCP chief Sharad Pawar blamed Bommai for the situation and warned that the state’s “patience” would run out if the attacks “do not stop in the next 24 hours”.

By evening, the Maharashtra government announced the suspension of state transport bus services between the two states. A senior state police officer said they have stepped up security in the border areas to ensure there is no retaliation on buses from Karnataka.

Shinde Shiv Sena leader and Maharashtra minister Shambhuraj Desai, who along with his party colleague Chandrakant Patil were scheduled to visit the border, said, “Both of us have decided to postpone our Belagavi visit to avoid any untoward incident… The stone-pelting on the Maharashtra vehicles is condemnable.”

On Tuesday afternoon, hundreds of activists of the Karnataka Rakshana Vedike, a pro-Karnataka outfit, started arriving in Belagavi in anticipation of the scheduled arrival of the delegation from Maharashtra. As the Karnataka Police stopped them near the Hirebagewadi toll plaza on NH-4, the Vedike members allegedly resorted to throwing stones and black paint on Maharashtra-registered vehicles.

The vehicles were stopped at the border and not allowed to proceed into Karnataka. Police detained several of the Vedike members.

Last week, Bommai’s office had written to Shinde, urging that the two Maharashtra ministers be directed to not visit Belagavi as it could trigger tension in the area.

Karnataka officials said more than 1,000 police personnel have been deployed on the border roads leading to Maharashtra. Belagavi SP Sanjeev M Patil said vehicles entering the state from Maharashtra are being checked at the border.

As news of the violence spread, workers of the Uddhav Thackeray-led Shiv Sena faction attacked buses with Karnataka number-plates parked at a private bus parking in Pune.

The decades-old border dispute between the two states, where the BJP currently holds power, stirs up every year around the time Karnataka holds a special session of its Assembly in the district. This year, tension began building up ahead of the session — scheduled to be held on December 19 — with the Supreme Court taking up Maharashtra’s appeal on the dispute.