Maharashtra Cabinet expansion today News Highlights, August 09, 2022: Ahead of the expansion, CM Eknath Shinde met Shiv Sena legislators at the Sahyadri guest house in south Mumbai to pacify those who will not be sworn in today.

Maharashtra Cabinet expansion Highlights: The Eknath Shinde government added 18 ministers to the state Cabinet on Tuesday. The oath-taking ceremony took place at the Raj Bhavan in Mumbai in the presence of Deputy CM Devendra Fadnavis and Governor Bhagat Singh Koshyari.

BJP state president Chandrakant Patil, Radhakrishna Vikhe Patil, and Uday Samant are among those inducted into the state Cabinet. Meanwhile, the induction of Sanjay Rathod was opposed by state BJP vice president, Chitra Wagh. “It is very unfortunate that former minister Sanjay Rathod, who caused the death of Pooja Chavan, has been given the post of minister again. I will continue my fight against Sanjay Rathod even though he has become a minister again,” Wagh said after the swearing-in ceremony. Chavan was a resident of Parli Vaijanath in the Beed district who died last year after falling from the balcony of a flat in Pune’s Hadapsar area. Several photos and audio clips have surfaced allegedly linking Rathod to her suicide.

Ahead of the expansion, CM Eknath Shinde met Shiv Sena legislators at the Sahyadri guest house in south Mumbai to pacify those who will not be sworn in today. Highly placed sources said, “Chief Minister Eknath Shinde held meetings with MLAs well past midnight. A lot of effort was undertaken to pacify the angry members who insisted on a Cabinet berth in the first expansion.” A second round of expansion will take place in September, Shinde indicated after the oath-taking ceremony.

"Inclusion of our former colleagues (from the MVA government), who were accused by the BJP of wrongdoings, into the Cabinet has raised questions on the allegations leveled at them by the then Opposition BJP, " says Leader of Opposition and NCP member Ajit Pawar.

Second round of Cabinet expansion in September, indicates Eknath Shinde

Speaking to reporters after the swearing-in ceremony, Maharashtra CM Eknath Shinde stated that the second round of Cabinet expansion would likely be held in September.

The newly sworn-in Cabinet has come under criticism for the lack of female representation. It also doesn't account for the Independents who had joined the Shinde camp following the rebellion.

Who is Tanaji Sawant, the newly-sworn in Maharashtra Cabinet minister?

Tanaji Sawant, 58, was the MLC for the first time in 2016 from Shiv Sena. He served as the Cabinet minister for Water conservation from 2014 to 2019. In the 2019 Assembly election, he won from the Paranda constituency in Osmanabad district.

He was denied a ministerial berth in 2019 by the MVA government and since then he was unhappy and was openly boycotting Shiv Sena meetings in the district. He was among the first ones to join Eknath Shinde after he revolted. He is one of the wealthiest MLAs with a number of educational institutes across the state. According to the election affidavit filed in 2019, he has assets of Rs 206 crore.

Who is Shambhuraj Shivajirao Desai, the newly-sworn in Maharashtra Cabinet minister?

Rebel Sena MLA who took oath in the Eknath Shinde-led Cabinet is a native of Satara district in western Maharashtra. He is a three-term Member of the Legislative Assembly (MLA) from the Patan constituency. He was a minister of state for Home (Rural), Finance and Planning, State Excise, Marketing, Skill Development and Entrepreneurship and was also appointed as the guardian minister of Washim district in 2020 during the MVA government.

He was elected as MLA for the first time in 2004, followed by 2014 and 2019. Desai was also a member of Zilla Parishad in Satara and the Chairman of Maharashtra Cooperation Council (Minister of State status).

After the Shinde camp's rebellion, Desai had hit out at Sena president Uddhav Thackeray and NCP alleging that even after making him junior minister he had no powers and had to be dependent upon NCP for doing every work and would not get funds as he would get in the earlier BJP-Shiv Sena government in 2014-19. According to the election affidavit filed in 2019, he had assets of Rs 14.4 crore.

Maharashtra BJP vice president Chitra Wagh has opposed the induction of Sanjay Rathod into the state cabinet. "It is very unfortunate that former minister Sanjay Rathod, who caused the death of Pooja Chavan, has been given the post of minister again. I will continue my fight against Sanjay Rathod even though he has become a minister again," Chitra Wagh said after the swearing-in ceremony.

On February 8, 2021, Pooja Chavan, a resident of Parli Vaijanath in the Beed district, died after falling from the balcony of a flat in Pune’s Hadapsar area. Several photos and audio clips have surfaced allegedly linking Rathod to her suicide. Weeks after he came under the scanner for her death, Rathod, a four-term Sena legislator, tendered his resignation as Forest Minister to Uddhav Thackeray in 2021, after mounting pressure from the BJP on February 28. Chitra Wagh was leading the protest and had then sought Rathod's resignation.

For over a month since its formation on June 30, Chief Minister Eknath Shinde and Deputy CM Devendra Fadnavis were the only ministers in charge of state’s administration, taking key decisions, including the revival of stalled projects in the state.

The two-member government’s new cabinet was finally sworn in on Tuesday.

We take a look at governments that have run with small cabinets in the recent past. Read here

Who is Uday Samant sworn in as Minister?

47-years-old Uday Samant from the Ekanath Shinde camp was a Minister of Higher Education and Technical Education of Maharashtra in the MVA government and has been MLA for four consecutive terms. It's his fourth term in Ratnagiri District in Maharashtra.

He was associated with the Nationalist Congress Party (NCP) before joining Shiv Sena in 2014. Samant was first elected as an MLA in 2004. Earlier, he has also been the guardian minister for Ratnagiri district between 2013-2014 and the guardian minister for Sindhudurg district from 2020 to June 2022. He was considered to be close to the Thackeray family and was appointed as deputy leader of Shiv Sena in 2018.

Facing criticism that no woman was sworn in during Tuesday's Maharashtra cabinet expansion, Chief Minister Eknath Shinde said that the next expansion of the cabinet is set to take place soon. "Our government is of every member of the society and justice will be made to all. This is not the final cabinet expansion. It will be expanded further very soon," said Shinde, while talking to reporters after the swearing-in ceremony.

The Shinde-Fadnavis government has come under criticism from the Opposition, with Nationalist Congress Party (NCP) Lok Sabha MP Supriya Sule terming it as an insult to women power. Sule said that Prime Minister Narendra Modi himself talks about women empowerment and asks women to not only be homemakers but also nation builders. "Not including a single woman is an insult to women power," she said.

Abdul Sattar (56), a three-time MLA from Sillod in Aurangabad, took oath as minister in the Maharashtra Cabinet on Tuesday. He won the seat on a Sena ticket in 2019. The lone Muslim face in the cabinet, Sattar who started his political career in the Congress was a minister of state in the previous MVA as well as Congress-NCP government. A day before the swearing-in, Sattar found himself embroiled in a controversy after the names of his two daughters appeared among the list of candidates who have been debarred by the Maharashtra State Council of Exams (MSCE) for their involvement in the teacher eligibility test (TET) scam.

For Maharashtra Chief Minister Eknath Shinde and Deputy CM Devendra Fadnavis, the Cabinet expansion exercise on Tuesday proved to be an exercise in managing expectations as the number of aspirants far outnumbered the 18 ministers sworn in. Nine of the ministers are from the Shinde camp while the rest are from the BJP.

Highly placed sources said, “Chief Minister Eknath Shinde held meetings with MLAs well past midnight. A lot of effort was undertaken to pacify the angry members who insisted on a Cabinet berth in the first expansion.” Read more

The newly sworn in Cabinet rises for national anthem

The oath-taking ceremony for the new ministers in the Maharashtra Cabinet came to an end, with the newly sworn-in ministers rising for the national anthem led by CM Eknath Shinde, Deputy CM Devendra Fadnavis and Maharashtra Governor Bhagat Singh Koshyari.

Mangal Prabhat Lodha 66 is a five-time BJP MLA from the Malabar Hill in Mumbai. The son of Guman Mal Lodha, the former Chief Justice of the Guwahati High Court, he has been an old BJP hand and a vital link of the party with Mumbai's mercantile community.

Founder of one of the leading real estate companies in Mumbai, Lodha is also the BJP Mumbai President -- a vital position in view of the upcoming BMC elections. Lodha had shot into the national limelight after he demanded the conversion of Jinnah House, the erstwhile residence of Mohammad Ali Jinnah, into the South Asia Centre for Art and Cultural Centre.

The much-awaited expansion of the state Cabinet is underway at the Raj Bhavan with 18 ministers taking oath — nine from the BJP and nine from the Shiv Sena.

BJP MLA from Kalyan Dombivali Ravindra Chavan took oath as Minister on Tuesday. He was also responsible for the transportation of MLAs from Mumbai to Surat during the beginning of the Eknath Shinde camp's revolt. 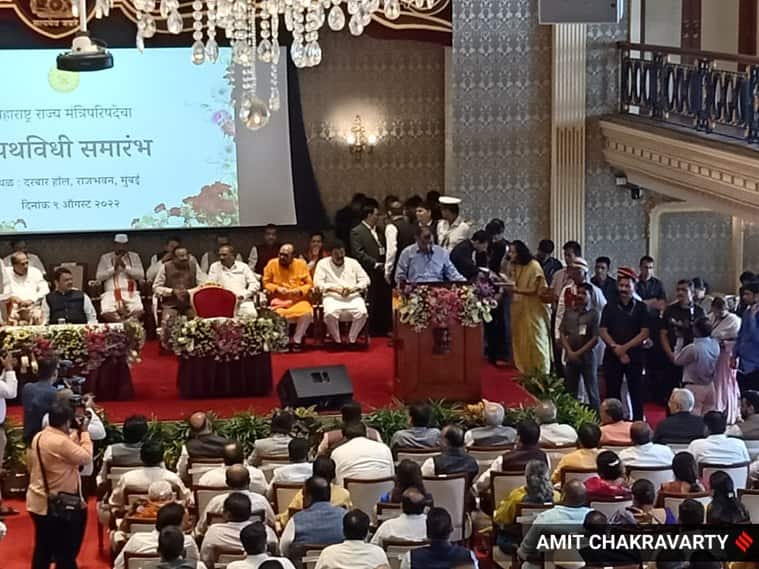 Uday Samant was sworn into the Maharashtra Cabinet Tuesday. He was in the NCP and crossed over to Shiv Sena. He hails from Ratnagiri and has now crossed over to the Shinde camp. 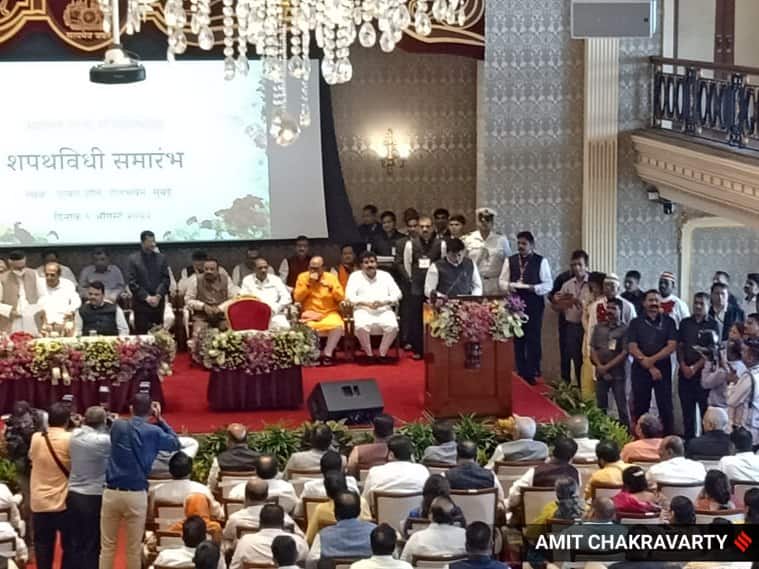 Dada Bhuse of Eknath Shinde camp took oath of office. He was the Agriculture Minister in Uddhav Thackeray's government.

Sanjay Rathod from Yavatmal and from Shinde camp takes oath as Minister. He had to resign from Uddhav Thackeray's Cabinet due to a controversy over the death by suicide of a 22-year-old woman in Pune

Radhakrishna Vikhe Patil (63) is a six-time MLA from Shirdi who joined the BJP after the Lok Sabha 2019 elections.

A second-generation leader from the Vikhe-Patil family of Ahmednagar that has dominated the region’s politics for decades, he was formerly the Leader of Opposition in the Assembly when he was with the Congress. He is seen as the most influential politician in Ahmednagar. Son Sujay, who had joined the BJP before the polls, is now a sitting MP. After his induction into the BJP in 2019, Vikhe-Patil was sworn in as the Housing Minister in the Devendra Fadnavis government and has made a reappearance in the new government.

CM Eknath Shinde and deputy CM Devendra Fadnavis held a two-hour-long meeting on Monday at the former’s Nandanvan bungalow in Malabar Hills to finalise the list of candidates for the Cabinet expansion.

A source in the Shinde faction said, “The criteria for shortlisting the candidates is to accommodate all the Shiv Sena rebels who were holding the ministerial berth in the Maha Vikas Aghadi (MVA) government.”

Among others, Shamburaje Desai, who was a junior minister, is also being considered in the first phase. Kadu of Prahar Sanghatna, who showed loyalty to Shinde faction, is also set to be rewarded with a ministerial berth.

The monsoon session of the Maharahstra legislature will be held from August 17. This will be the first session for chief minister Eknath Shinde after winning the trust vote.

The two-week monsoon session was scheduled to start on July 18 and was planned by former Chief Minister Uddhav Thackeray. But after winning the trust vote, the Eknath Shinde-led government decided to postpone it.

On Monday, the government decided to start the session from August 17 since there are many upcoming festivals and it would have been difficult to call all MLAs at short notice. Many of the staffers at Vidhan Bhavan had protested after the session was first scheduled on August 10, due to the many upcoming festive events, and Congress leaders also said they would have to leave planned yatras and come to Mumbai.